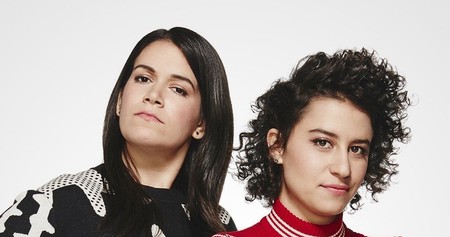 Broad City is not a new show by any means. It’s half hour special on Comedy Central in its third season and is already slated for two more, and it’s no wonder why. It first aired in 2014 to high critical acclaim after garnering an immensely loyal fan following via their web series of the same name.

The sitcom follows protagonists and best friends Abbi Jacobson and Ilana Glazer, who are just a couple of twenty-something young women trying to make it in a harsh world while still taking every opportunity to enjoy themselves. The best thing about it? They have actually lived it, and both Abbi and Ilana, who both use their real names for the characters, also write, produce, and star in their own creation. Talk about talented! Here are a few of the many, many reasons why it’s beyond great.

1. Abbi and Ilana call themselves ‘femininjas.’

With their ‘sneak attack feminism,’ each episode doesn’t seem to have a feminist manifesto, and sometimes the ironic dialogue even makes fun of Ilana’s idealist and fiery feminist diatribes. Nevertheless, the inherent realness of the characters that shows them at their worst is a strangely powerful depiction of the modern women that is not often seen.

2. Amy Poehler is the producer of the show.

And she’s also the personal mentor to Abbi and Ilana. So they’re basically the next best female comedian duo just like Amy and Tina Fey. We know the show has to be good when its backed by Parks & Recreation and Saturday Night Live mega-stars.

3. They aren’t shy about anything.

Broad City is this generation’s new Sex and The City. If we thought nothing could get more raunchy and open than Carrie Bradshaw’s sex column in The New York Star, it’s about time we think again. As in Ilana video chatting with Abbi while she simultaneously has sex with Lincoln, her friend with benefits. The world needs more honest conversations that celebrate female sexuality.

4. The men on the show are hilarious too.

Ilana’s desperate love interest is played by the hysterical stand-up comedian, Hannibal Burress, whose character is another reason to watch, as he depicts the opposite of a typical male character. He is stable, sensitive, and just wants a monogamous relationship, and his emotionality is downright adorably funny.

5. They’re political, and they want people to know know it.

Hillary Clinton came on the show last season during her presidential campaign. Yes…Hillary Clinton herself. Ilana and Abbi geeked out just as hard as any feminist rightfully should. It was a true highlight moment for the show and the characters.

6. Yet they’re far from perfect citizens…

but they’re just people trying to make it in the big city like everyone else. This is a common trope, but mix it with a signature blend of a little bit of crazy behavior, quite a bit of drug use and a lot of odd scenarios, and it’s totally fresh. Ilana and Abbi mess up – a lot – and the audience loves them for it.

7. Nothing is off limits.

The humor is wild, crude, intelligent and ridiculous. From gross body jokes to brilliantly half-cocked schemes, there is really nothing they can’t or won’t do. Everyone will find something to laugh about.

Not everyone in the show looks Hollywood gorgeous. Again, this is another element that makes the show so believable and relatable. They don’t look like actresses – they look like real-life friends.

They’re not quite adults yet but are caught in the in-between years. And the best part of that is, they make the best of it because the show celebrates their journeys even if they seem lost at times.

And they like it. Everything about the show is amazingly odd. So odd, in fact, that it makes it so real – because they know life is often stranger than fiction.