Given that Los Angeles is the film and TV capital of the country, it should come as no surprise that Hollywood has made use of its many hotels and motels. Some have played themselves, while others stand in for locations in Miami or Washington D.C. From seedy roadside motels with flickering neon signs to crumbling Art Deco palaces and modern luxury suites, here are 10 hotels you might recognize from screens both silver and small.

This kitschy retro hotel is located in Santa Monica, just steps away from the beach, making it a prime location for any traveler. In Amazon’s 2016 legal drama series Goliath, the Ocean Lodge is where cynical lawyer Billy McBride (Billy Bob Thornton) holes up after leaving his own firm and a bitter divorce from fellow lawyer Michelle McBride (Maria Bello). Many scenes depict characters pacing the balcony as they delve deeper into a complicated and perilous case. 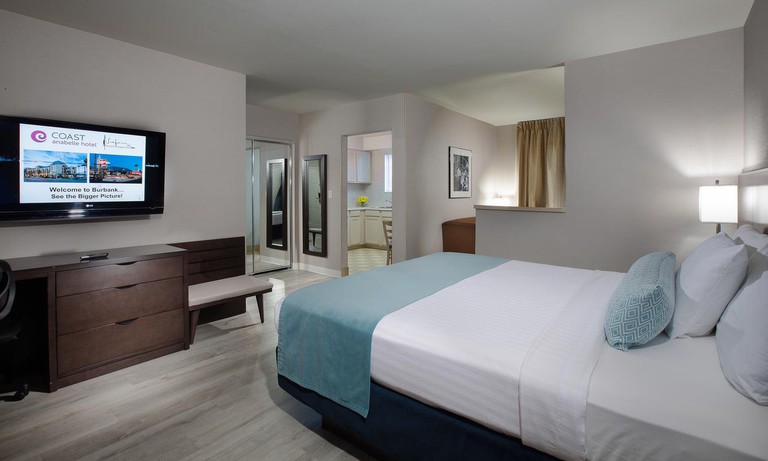 Courtesy of Safari Inn / Booking.com
View Rooms
Quentin Tarantino and Tony Scott’s 1993 crime flick True Romance follows the misadventures of Clarence Worley (Christian Slater) and Alabama Whitman (Patricia Arquette), who fall in love at a movie theater in Detroit (actually depicted by Los Angeles’ Vista Theatre). Clarence later learns that Alabama works as an escort and decides to murder her abusive pimp and flee with his new love to Los Angeles. On the run from the pimp’s unsavory associates, the pair hide out in the Safari Inn. The real Safari Inn is in Burbank, its neon still emitting a warm glow today.
EVERYTHING YOU NEED TO KNOW

Pretty Woman (1990) takes us to numerous Los Angeles-area hotels as we follow the blossoming relationship between Vivian Ward (Julia Roberts), a streetwise sex worker, and affluent businessman Edward Lewis (Richard Gere). Though Edward stays in the luxurious penthouse of the the sprawling Beverly Wilshire, Movie Locations notes that most of the interiors were filmed at the Ambassador Hotel in Koreatown. The Ambassador Hotel’s past is not all glitz: Robert F. Kennedy was assassinated in the hotel’s kitchen in 1968 after delivering a speech celebrating his victory in the California Democratic primary. In 2005, the Ambassador Hotel was demolished, and the Robert F. Kennedy Community Schools were built in its place.

In Steven Spielberg’s 2002 crime drama based on real-life fraudster Frank Abagnale, FBI Agent Carl Hanratty (Tom Hanks) almost captures Abagnale (Leonardo DiCaprio) when he tracks him to the Tropicana Motel. The Tropicana, in this case, is played by Hollywood’s iconic Hollywood Roosevelt Hotel. The hotel’s rear entrance – which leads to its poolside lounge (actually named the Tropicana Bar) – serves as the main entrance of the film’s motel.

Hotel
Facebook
Email
Twitter
Pinterest
Copy link
Share
Map View
View Rooms
In the 2012 family drama People Like Us, Chris Pine plays a New York City corporate trader who must reconnect with family he wasn’t even aware he had following the death of his father. His journey leads him to Los Angeles where he meets Frankie (Elizabeth Banks), the single mother of an 11-year-old boy. Frankie works nights tending bar and is seen pouring drinks at the rooftop lounge atop the Standard Hotel in downtown Los Angeles – not to be confused with the Standard in West Hollywood. This hotel can be glimpsed in an episode of Entourage.
EVERYTHING YOU NEED TO KNOW

In ’80s teen rom-com Pretty in Pink, plenty of high school angst and drama occurs before Andie (Molly Ringwald) finally makes it to the prom. The ballroom where the other students are dancing to OMD’s new wave hit “If You Leave” can be found inside the beaux-arts Millennium Biltmore Hotel, built in 1923 in downtown Los Angeles. Parts of this hotel also appear in Beverly Hills Cop and Ghostbusters.

In 1995’s grim crime thriller Se7en, Brad Pitt and Morgan Freeman play two detectives on the trail of a sadistic killer (played by Kevin Spacey) who seems to be choosing his victims based on the seven deadly sins. At one point in the film, Pitt chases Spacey through the Hotel Alexandria, crashing through windows and fleeing up and down stairwells. In one moment, Spacey slides down a fire escape parallel to the Alexandria’s vintage blade sign. The once grand hotel opened 1906.

Though the sleek Westin Bonaventure Hotel has been used in a number of films, perhaps its most memorable appearance was in 1994’s True Lies, when Harry Tasker (Arnold Schwarzenegger) commandeers a police horse to pursue a fleeing suspect on a motorcycle. The chase leads him through Washington D.C. in the film, but it was shot in Los Angeles. Schwarzenegger manages to lead the horse into one of the hotel’s glass elevators, staring down the suspect and his hostage as they ascend in an identical elevator across the way. Enter one of these elevators today, and find a plaque informing visitors they are riding in one of the two elevators used in the film. 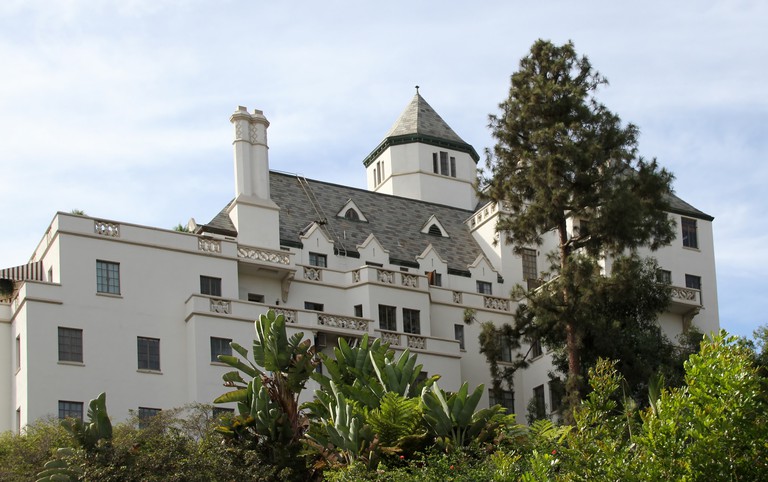 You've made it when you can live here | ©Tony Hisgett / Flickr
In Damien Chazelle’s 2016 musical La La Land, aspiring actress Mia (Emma Stone) and jazz musician Sebastian (Ryan Gosling) fall in love throughout Los Angeles, with scenes set at iconic landmarks including the Griffith Observatory and the Angels Flight funicular. The film covers several years in their lives, and at one point, Mia is seen living in the famous Chateau Marmont. Though, as Curbed notes, interior shots of Mia’s Chateau home were filmed elsewhere. The 1929 luxury hotel has been mentioned numerous times in Lana Del Rey songs and has been the temporary home of celebrities including James Franco, Britney Spears, Jim Morrison, and Lindsay Lohan. The Chateau Marmont has also made an appearance in Somewhere (2010) and The Doors (1991).
Open In Google Maps
8221 Sunset Boulevard, Sunset Strip, Los Angeles, California, 90046, USA
+13236561010
Visit Website
Give us feedback

The Pink Motel and its accompanying Cadillac Jack’s Café have appeared in numerous films. Their retro look – including the neon sign, dated interiors, and classic cars kept onsite – make it a popular choice for location scouts. The interior of the motel was used for a tense and bloody scene in 2011’s Drive. Spot this motel in a season one episode of Dexter as well, where Miami police have tracked a suspected serial killer.