Iconic Movie Scenes You Didn't Know Were Filmed in LA 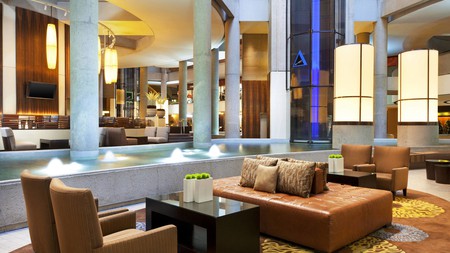 With the huge film industry presence, it’s only natural that many movies are set and shot in Los Angeles. In some movies like ‘Falling Down’, ‘LA Confidential’ and ‘Drive’, the city is as much a character as it is a setting. But there are many more movies in which parts of the city have uncredited cameos. Here are some of the top movie scenes where Los Angeles plays as somewhere else.

Planning a trip to the movie capital of the world? Our carefully curated film tour of LA combines a selection of immersive film-themed activities paired and a stay at a Hollywood-history-nodding hotel that will make you feel like an A-lister.

Casablanca – Here’s Looking at You, Kid 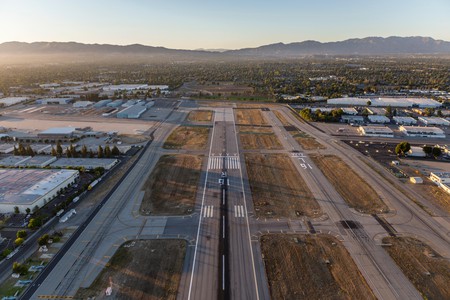 Considering it was made in 1942 during the height of the Hollywood Studio System, not to mention World War II, it’s not surprising that the cinematic classic Casablanca was mostly shot on sets and sound stages designed to replicate its Moroccan setting. But the most famous scene of that – or possibly any – movie was filmed out on the tarmac with a real Lockheed L-12A and a generous helping of fake rain (this is LA, after all). Local legend holds that the scene was filmed at the Bob Hope Airport in Burbank, but in fact it happened a few miles away at the Van Nuys Airport.

Back to the Future – 88 Miles Per Hour 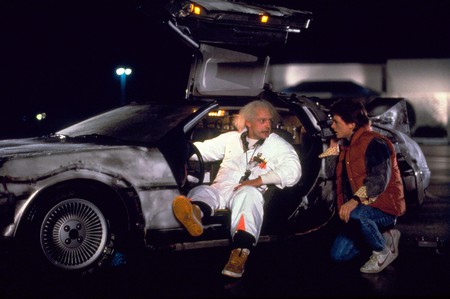 Head to Universal Studios to visit the ‘Back to the Future’ set | © Allstar Picture Library Ltd. / Alamy Stock Photo

The Back to the Future trilogy is set in the fictional town of Hill Valley, California, which made it convenient to film around Los Angeles. Downtown Hill Valley was built on the Universal Studios backlot, where you can still see it as part of the studio tour. But the scene where Christopher Lloyd’s Doc Brown unveiled his iconic time-traveling Delorean was filmed in the parking lot of the Puente Hills Mall in the City of Industry. The parking lot is on the south side of the mall, off of Colima Road, with a 24 Hour Fitness where the JC Penny used to be. Of course, the little fotomat is no longer there.

Marathon Man – Are You to Be Trusted? 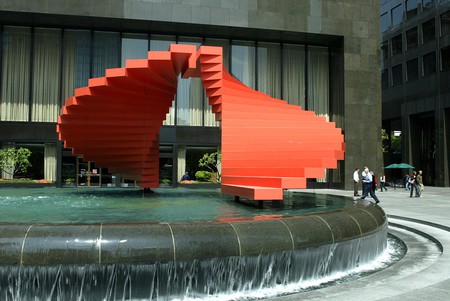 Except for a scene in Paris, the paranoid 70s thriller Marathon Man is set and filmed in New York City. But one memorable scene was shot rather oddly on the other side of the country. Roy Scheider’s Doc meets his grisly end at the hands of Laurence Olivier’s fugitive Nazi war criminal, with the dramatic sculpture/fountain Double Ascension as a backdrop. That sculpture is in the City National Plaza (formerly ARCO Plaza) on Flower Street between 5th and 6th in downtown Los Angeles.

Inception – You’re Waiting for a Train…

Of all the spectacular effects in Christopher Nolan’s Inception, none is quite as jarring as that freight train coming loudly out of nowhere and barreling down a city street. While Inception was filmed both in soundstages and on location all over the world, from Tangiers to London to the Canadian Rockies, that scene was shot in downtown Los Angeles. The train travels north on South Spring Street for a couple of blocks around 7th street. Incredibly, that train was not computer generated, but an actual locomotive that they put on wheels and drove through the street (and a few dozen cars).

Halloween – Death Has Come to Your Little Town 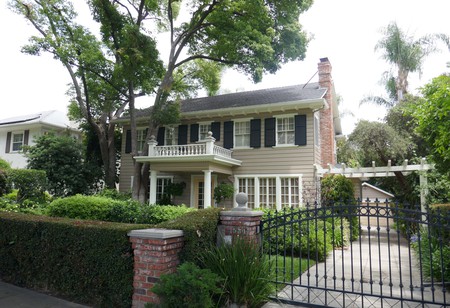 John Carpenter’s slasher classic Halloween is set in the fictional town of Haddonfield, Illinois. But standing in for the small Midwestern town is suburban Hollywood. Most of the action in the movie takes place at the homes of Jamie Lee Curtis’s character, Laurie, and her friend Annie. The houses in the movie are across the street from one another, and so they are in real life, residing on Orange Grove Avenue in Hollywood between Sunset and Selma. Although the girls’ houses are still there, Michael Myers’s home from the first scene has been torn down and replaced by trendy retail development in South Pasadena. It’s probably for the best. 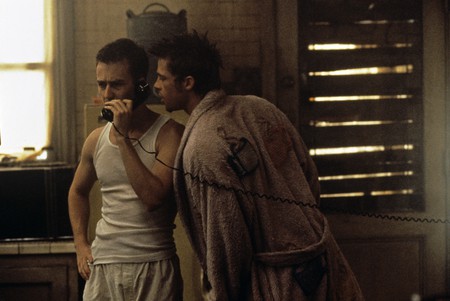 David Fincher’s Fight Club, and the Chuck Palahniuk novel on which it’s based, could take place in Any City, USA. But in fact it was filmed at various locations around Los Angeles. The most striking of these settings is the dilapidated Paper Street mansion that serves as the protagonist’s home. Although it looks like a rotting Victorian relic, the entire home was purpose-built for the production, artificially aged and then torn down after the film wrapped. You can see the vacant lot where the house used to stand on the southeast corner of Neptune Avenue and C Street, just don’t ask any questions about Project Mayhem. 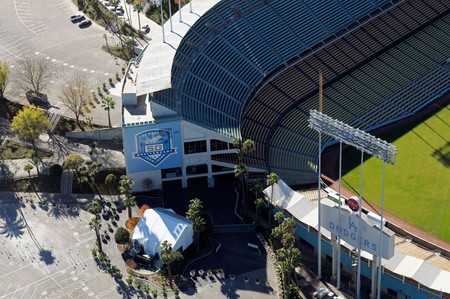 JJ Abrams’s Star Trek reboot takes place mostly in outer space, but many of the terrestrial scenes were filmed around LA. Although Starfleet Academy is supposed to be in San Francisco, the exterior shots were actually filmed at Cal State Northridge with some CGI backgrounds. The Budweiser brewery in Van Nuys stood in for the Enterprise engine room, and the Skyrose Chapel in Whittier was used for the interior scene in the Vulcan Science Academy. Kirk and Sulu’s fight on the Romulan drilling platform was filmed in the parking lot at the LA Dodgers Stadium.

Touch of Evil – Crossing the Border 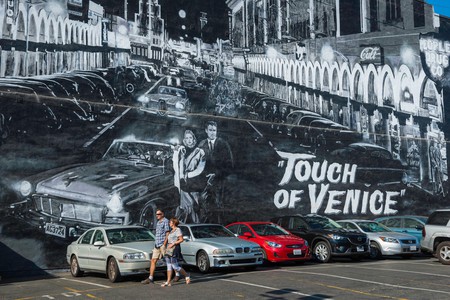 The opening scene of Orson Welles’s Touch of Evil is one of the most famous tracking shots in cinematic history. The three-and-a-half minute single-take scene follows the path of a car bomb through the streets of fictional Mexican town and across the border into the United States. But in reality those streets lay far from the border in downtown Venice. The action follows Windward Avenue south from Pacific and then makes a right on Speedway. The buildings have changed a little since the scene was shot in 1958, but in 2012 the city commissioned a public mural on Windward to commemorate the film.

There Will Be Blood – I Drink Your Milkshake! 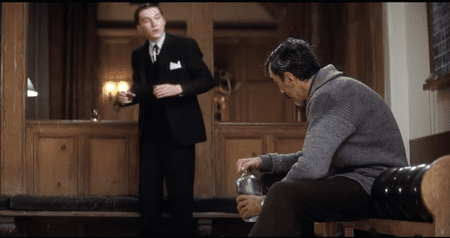 It seems natural that PT Anderson’s There Will Be Blood would be shot in LA, since the Sinclair Lewis novel on which it’s based is all about the Southern California oil boom, but actually most of the filming was done in Texas. However, the climactic final confrontation between Daniel Day-Lewis’s character, Daniel Plainview, and Paul Dano’s Eli Sunday was filmed in the private bowling alley of the Greystone Mansion in Beverly Hills. 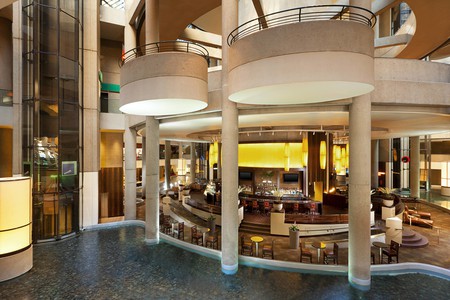 Christopher Nolan filmed the extraplanetary scenes of his space epic Interstellar in some of earth’s most unearthly places, and famously built a full-scale spaceship set for both the internal and external shots. But one memorable set piece was hiding right here in LA. The cavernous underground bunker that houses the future Nasa is actually the lobby of the towering Westin Bonaventure hotel on South Figueroa. The massive set took three weeks to build and took up the first six floors of the hotel’s atrium for three days worth of filming.