Why the Mexicans Can Thank the Lebanese for Tacos Al Pastor 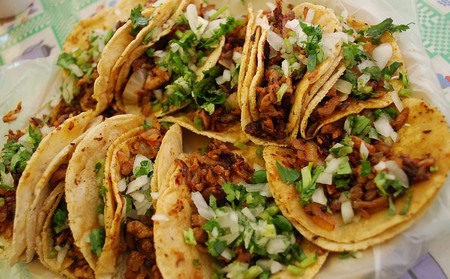 It can be transfixing to watch a skilled taquero (taco master) turn the giant tacos al pastor spit and slowly slice downwards, slivering tiny shards of marinated pork meat onto a small corn tortilla. But what are the origins of Mexico‘s famous food, and how did it become so popular? Here’s everything you need to know.

The signatory red color of the al pastor meat glints in the streetlight as fat drips from one layer to the next, basting each morsel with its own spicy juices. With the speed of a cat, the taquero sprinkles on the chopped cilantro and onion, and with the flick of the wrist, a thin slice of pineapple lands neatly in the center of the taco. Perfection.

Tacos al pastor – the back story

If you’ve never had tacos al pastor (‘shepherd style’), you haven’t really lived. An iconic dish across the country, it is most popular and most hailed in Mexico City, where you can eat them day and night. So where does this delicacy come from? Where most dishes tend to come from in Mexico – the blend of various distinct cultures that mix and match ingredients, techniques and spices to create one of the world’s most eclectic cuisines.

The history of this quintessential Mexican dish dates back to the early 1900s when Lebanese immigrants ended up settling in the state of Puebla, just a few hours south of Mexico. No one can verify the exact date, but around 1930 the first vertical roasting spit appeared in Puebla, thought to have been brought by some of those recent immigrants.

The trompo, as it’s called in Mexico, was the same type of spit used across the Asian continent from Indian to Greece to cook marinated lamb meat. The roasted lamb was then served in a type of bread that varied culture to culture, the most common we know of today, is the pita. Al pastor literally means “shepherd style” which is believed to refer to the type of meat that was originally used (lamb) – a grazing animal. 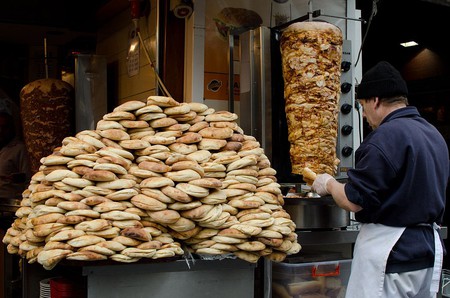 In Puebla the Antigua Taquería La Oriental and Tacos Arabes Bagdad claim to be the creators of this dish – both were founded in 1933. The original version of these “tacos arabes” lacked the complex mix of spices and natural coloring agents used in tacos al pastor today.

Nowadays it’s thinly sliced pork – not lamb – that’s marinated in a variety of spices that could include ground achiote seeds or paste, ground red chiles, and various other herbs. Each taquero makes his or her marinade just a little bit different, some even add orange juice or Coca-Cola – it’s very secretive business. The pork meat is mainly lomo (loin) or pierna (leg) but it must be interspersed with layers of fattier cuts like pescuezo (neck), shoulder or breast for just the right tenderness. 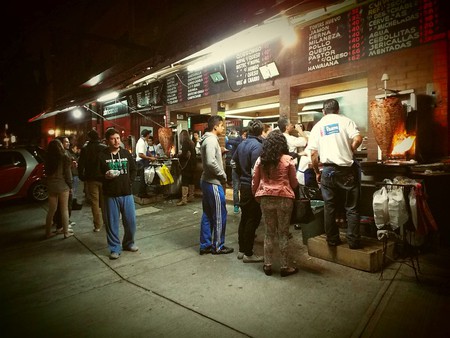 The original version of tacos al pastor also didn’t include chopped cilantro and onion OR a slice of pineapple on top. Where did the pineapple come from? While a combination of meat and fruit is common in many different cuisines, giving dishes a sweet and savory vibe, the original “tacos arabes” or “tacos orientales‘ in mexico didn’t have it. El Tizoncito, one of Mexico City’s most famous taquerías, claims that they invented this addition and so far no one has been able to dispute them. Tacos al pastor are traditionally served with a smoky chipotle salsa, but these days, anything goes, and you can add whatever salsa suits your fancy.

In Mexico City, the oldest taquería serving tacos al pastor is Huequito, which was founded in 1950. Another famous favorite is El Vilsito, open from 8pm-3am in a what is during the daytime a mechanic shop. In daylight hours you can find great tacos al pastor at Los Parados in Colonia Roma – though any time of day is a good time for tacos al pastor.