The Top Things To Do in Puebla City, Mexico 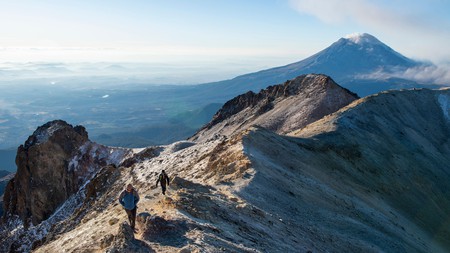 The city of Puebla de los Ángeles, in the state of the same name, is one of the most popular tourist destinations in Mexico, not least because of the delicious culinary heritage, ornate and magnificent colonial architecture, and ease of access from Mexico City. Even Unesco has recognised its cultural value. Here’s our guide to the unmissable sights and activities in Puebla City.

Explore a volcano – inside or out 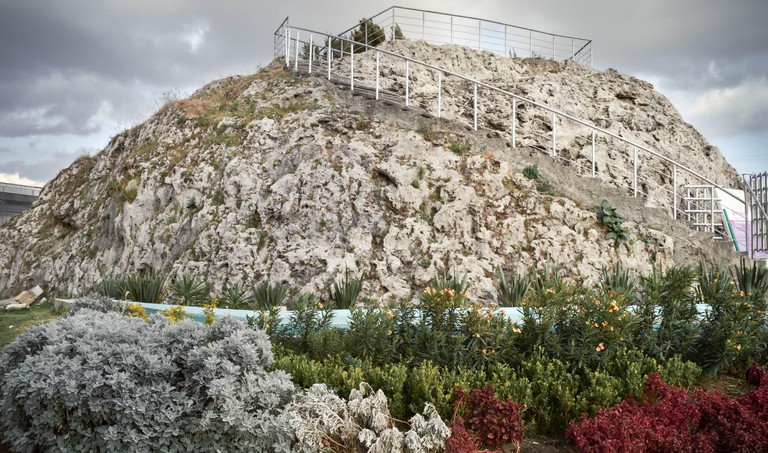 Walk up Cuexcomate geyser... it won't take too long | © Svetlana Bykova / Alamy Stock Photo
If you’re feeling adventurous, or prefer the path less traveled, may we recommend exploring a few volcanoes? Puebla has the twin volcanoes, Iztaccíhuatl and Popocatépetl, as good as on the doorstep. While the latter is off limits to visitors, due to a 1994 eruption, the former still makes for a great day climbing or sightseeing. You could also venture within the Cuexcomate geyser.

Besides mole poblano and the seasonal delight that is chile en nogada, Puebla is also well known for producing delicious sugary treats. The best place to sample all the culinary specialties this city has to offer is the so-called Calle de los Dulces (Sweet Street) – also known as La Calle de Santa Clara. Make sure to try some of the region’s most representative candies – camote, muégano and las tortitas de Santa Clara.

Get a different perspective on the city

Once you’ve had your fill of browsing the artisanal stores that line the Puebla streets, you’ll be ready for a new perspective on the colonial city: a ride in the teleférico, or cable car. You’re suspended high above the city on the 2,231ft (680m) traverse, so you can see all the beauty in one go. If the thought of dangling from a wire doesn’t appeal, ride the Estrella de Puebla, a 262ft (80m) high ferris wheel that delivers views of Izta and Popo volcanoes as you circle slowly. 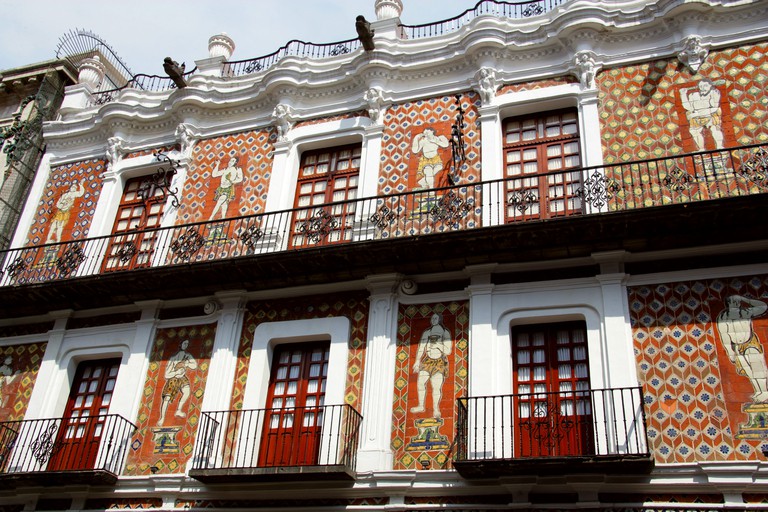 Casa de los Muñecos is wrapped in Talavera tiles | © Travelpix / Alamy Stock Photo
Puebla is known as one of the finest destinations for architecture in Mexico. While you’re here, seek out some of the slightly less conventionally decorated buildings – your Instagram followers will thank you. The first is Casa de los Muñecos, its facade clad in gingerbread-colored faience-style Talavera tiles. If that’s your bag, also take in the Casa del Alfeñique, covered in tiles that make the exterior look like gingham. For baroque fans, Capilla del Rosario is a must-see, as is the Iglesia de la Compañía de Jesús. For something more modern, head to the Ricardo Legorreta-designed La Purificadora. 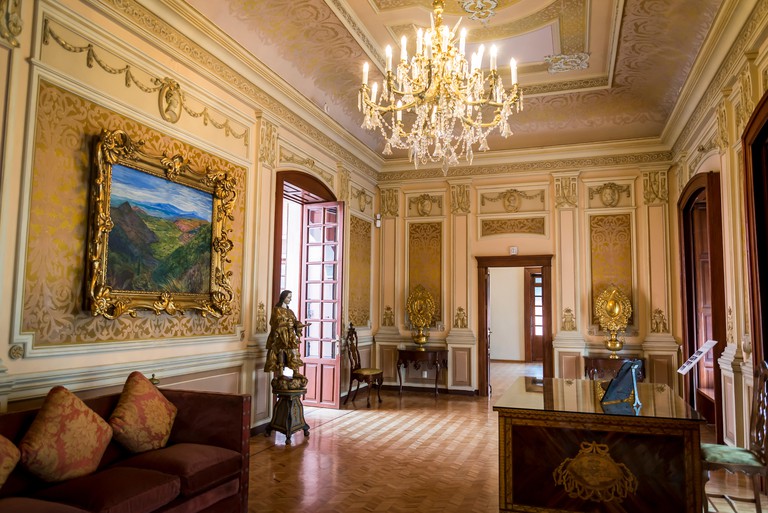 Museo Amparo holds art from the pre-Hispanic to modern eras | © Bjanka Kadic / Alamy Stock Photo
If you love art, don’t forget to visit Museo Amparo. It might be little, but within two colonial buildings is housed one of the finest collections of Mexican art in Latin America – and entry is free. Since it opened 30 years ago, the museum has acquired everything from pre-Hispanic art to modern-day pieces. Take a good look for the sculptures of rabbit-headed gods of scribe and the elaborate canvases of Catholic saints and aristos. While you’re here, check out the terrace too – you’ll get an unbeatable view over the city.

In Puebla they like their food – and they adore their libations. The city is the home of many fantastic drinks more or less exclusive to the state. You could sip a Mexican mojito, also known as a menyul – there are many varieties but essentially it’s a mint julep made with rum instead of bourbon. You might like a super-strong pasita, a much-loved liqueur made from a local, raisin-esque fruit. Also try the eggnog-like rompope.

Try the 'mole poblano' for which Puebla is famous

Shop
Facebook
Email
Twitter
Pinterest
Copy link
Share
Map View
You simply cannot visit Puebla without trying mole poblano. This rich, thick, chili-chocolate-flavour sauce, typically served with rice and meat, is the national dish, and where better to try it than in the place from which it originates? Of course, you could order at a restaurant, but why not buy the ingredients from Mercado el Carmen and make your own? If mole doesn’t sound up your street, then perhaps you need Puebla’s signature dish, the sandwich-like cemita, or how about a purple quesadilla from Mercado de Cholula?

Take photos of the murals in Xanenetla 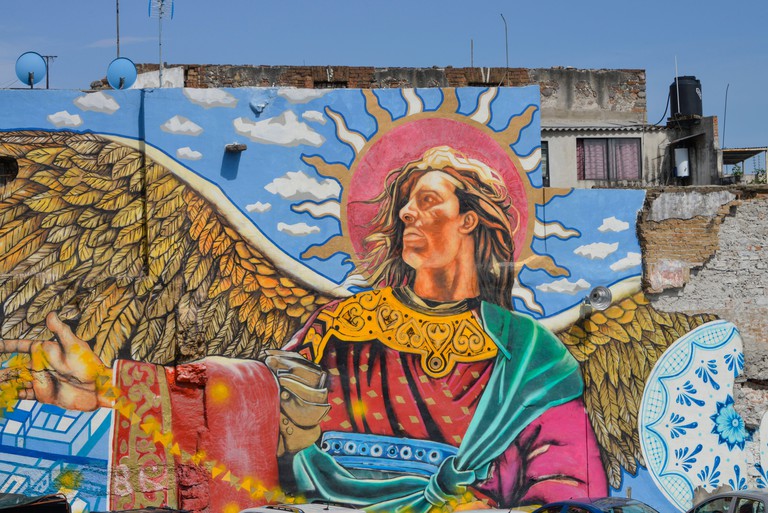 Barrio de Xanenetla is packed with stylish street art | © Schoening / Alamy Stock Photo
Considered the youngest neighborhood in Puebla, Xanenetla is also one of the most vibrant and will give you a great culture hit if you’re more interested in street art than colonial architecture. Once written off as unsafe, it has a new lease of life thanks to street-art projects around the barrio, attracting plenty of arts-oriented travelers. Cobbled streets and around 55 colourful, full-wall sized murals await in this quirky corner of the city. It’s a great way to find out more on foot – the art addresses everything from the city’s past to its celebrated residents, as well as people’s hopes and fears.

Many people think Cinco de Mayo is Mexican Independence Day, when in fact that is on 16 September. Still, one state in Mexico does celebrate 5 May and that state is Puebla. On 5 May 1862, Ignacio Zaragoza and his troops defeated the attacking French army on the Cerro de Loreto y Guadalupe, the hilltop home to the Loreto and Guadalupe forts. You can – and should – explore the old military stronghold, now home to a museum rather than an army. The view from the forts is spectacular, too, down over the city below.

Visit one of the most beautiful cathedrals in Mexico 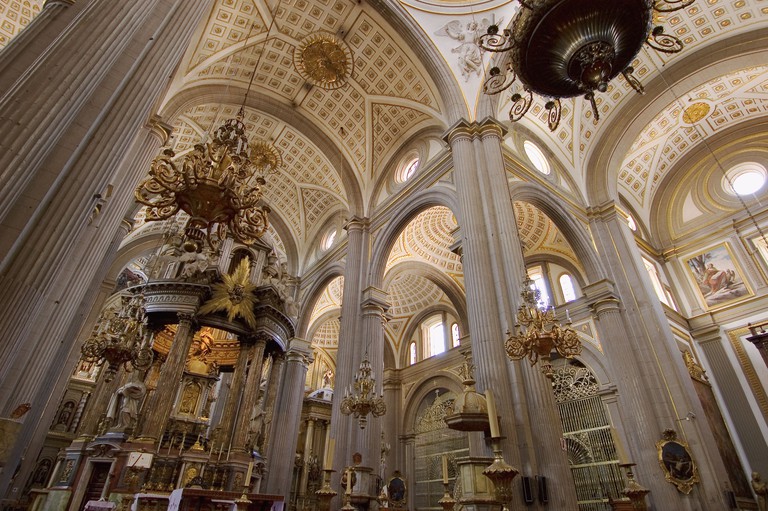 The domed roof of the Catedral de Puebla was inspired by St Peter’s Basilica in Rome | © agefotostock / Alamy Stock Photo
Easy to find – as are most of the cathedrals in Mexico – right on the main square, the Roman Catholic Catedral de Puebla is essential viewing, with its façade covered in sculptures of saints including Rose of Lima, Teresa of Avila, Peter, Paul and Gabriel. Constructed in 1575 it has a remarkable tiled dome roof inspired by St Peter’s Basilica in Rome. You can wander the peaceful interior, which is lined with 14 tranquil side chapels. Prolific sculptor Manuel Tolsá, who worked in Spain and Mexico in the early 19th century, was the creative force behind the impressive principal altar.

Browse the antiques on Frog Alley

Callejón de los Sapos (Frog Alley), is a treasure trove of antiques dealers, artisanal vendors and furniture hawkers. At the weekends, it hosts a flea market, where you can pick up some Talavera pottery or some vintage movie paraphernalia to take home as a colourful souvenir of your time in Puebla. 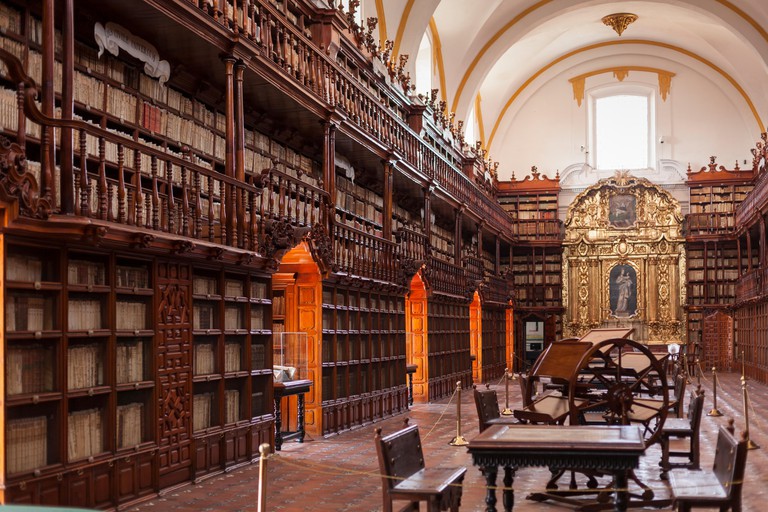 Founded in 1646, Biblioteca Palafoxiana was the first public library in Mexico | © Jon Lovette / Alamy Stock Photo
No point in playing it down – this is one of the finest libraries in Mexico, if not North America. You’ll find the Biblioteca Palafoxiana tucked within Casa de la Cultura and even if you only consider yourself an amateur bibliophile you’ll treasure a visit. Founded in 1646, it has since amassed more than 41,000 works on its polished-wood bookcases, lining the place wall to wall and floor to ceiling. This was the first public library in Mexico and, many believe, in the Americas. 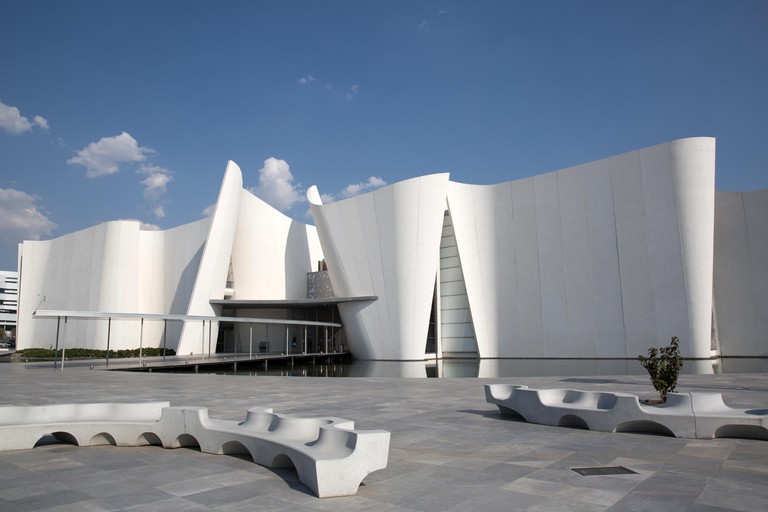 The Museo Internacional del Barroco was designed by Pritzker Prize-winning architect Toyo Ito | © Benedicte Desrus / Alamy Stock Photo
With gold-filled churches full of Tenebrist art in the Caravaggio style, Puebla is the best place in Mexico to host a museum of the baroque. Housed in a spectacular white-concrete building by Pritzker Prize-winning architect Toyo Ito, the establishment focuses on the glittering ecclesiastical baroque, which reached a zenith in Latin America. Galleries are crammed with altarpieces and artifacts from the region, many of them displaying indigenous craftsmanship; classical music of the period plays throughout and interactive displays explain the context.

Architectural Landmark
Facebook
Email
Twitter
Pinterest
Copy link
Share
Map View
Puebla’s not all colonial architecture, cobbled streets and glittering churches. The Parque Ecologico is a 143-acre (58 ha) public park in the northeastern suburbs. It’s a good place to settle in and cool off – pooled with lakes and home to extensive woodlands plus plenty of shady nooks. There’s a circular aviary (filled with tropical birds), cycle trails and running paths (with adjacent fitness machines), cafes and picnic areas. After dark the fountains are illuminated in rainbow colors. 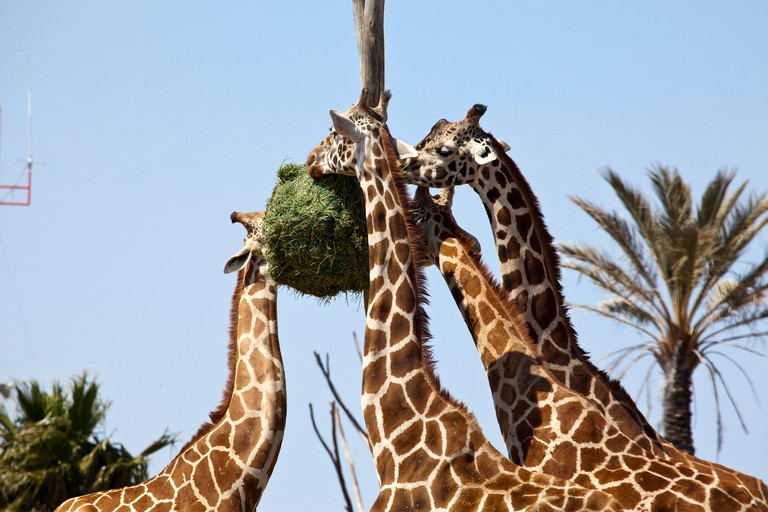 See the giraffes eating at Africam Safari Zoo | © agefotostock / Alamy Stock Photo
This safari park was founded in the 1970s by celebrity businessman Carlos Camacho Espiritu. With open-air enclosures, which mimic natural surrounds, and an active conservation programme, it is one of the more forward-looking zoos in Latin America. The collection is themed according to famous wilderness locations: Chitwan is home to Bengal tigers, Serengeti to African lions and Huasteca (based on the Gulf-Coast region of La Huasteca) exhibits North American animals including coyote, peccaries and black bears.