The Best Way to Watch Lucha Libre in Guadalajara, Mexico 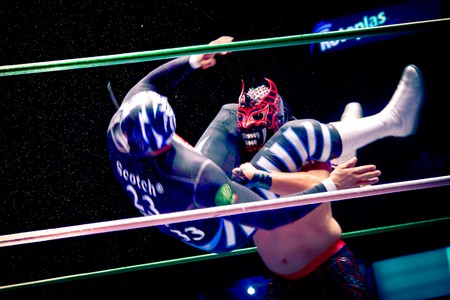 Mexican pro wrestling, or lucha libre, is a must-see spectacle for visitors to Guadalajara. While UNESCO is unlikely to put the choreographed sport onto its cultural heritage list – as it has done with charrería – nothing can match las luchas for pure, unadulterated surrealism. La Arena Coliseo de Guadalajara is the only place in the city to catch a full blown lucha libre event, which will typically feature three or four wrestling bouts and a guaranteed carnival atmosphere.

Mexican wrestling has been in the international spotlight for around a decade. The 2006 film Nacho Libre, starring U.S. comedian Jack Black, attracted global attention to the sport. Wrestling events featuring Mexican superstars are even held regularly in the UK, following the success of a sold out show at the Royal Albert Hall in 2015.

Yet in Guadalajara wrestling is much more than a bit of flamboyant fun. La Arena Coliseo attracts flocks of devoted regulars and the city has produced top name fighters such as Shocker and El Satánico.

By far the best way to watch lucha libre in Guadalajara is to take the famous Red Pub tour held every Tuesday of the year. In a nod to the surrealism that awaits you at the arena, you’ll be picked up in a London-style double-decker bus that leaves the Red Pub Estación Central near trendy Chapultepec Avenue at 8:30 pm.

A ticket for the tour costs MXN$195 and includes a ringside seat at the stadium, transport both ways and a complimentary beverage (beer or soft drink) on your return to the pub.

Ironically nicknamed “Glamour Tuesdays,” there are undoubtedly more refined evening itineraries. Yet there a few better ways to prepare for a rowdy wrestling match than an equally raucous ride through central Guadalajara.

At the stadium, you’ll be treated to a spirited display of staged combat. While lucha libre is not a real competitive sport, some of the acrobatics on display are impressive in their own right.

A typical event features both one-on-one and tag team events that pit the brave and honest técnicos against the wicked rudos. It’s not hard to spot who’s who. The tecnicos have names such as Explosivo and Divino, while the rudos include Maléfico, Exterminador and Luciferno.

Any lingering doubts as to who to support will be cleared up by the deafening cheers and boos of the crowd, who are as much a part of the spectacle as the professional wrestlers. If you’re really lucky you may end up watching a classic bout, after which fans traditionally shower the wrestling ring with paper money.