The Best Things to Do in Isla Holbox, Mexico 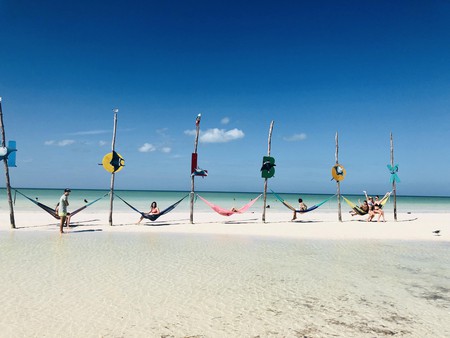 The Caribbean shores of Mexico have metamorphosed in a matter of decades from unspoilt idyll to built-up, sophisticated tourist heaven. Which is lovely if you like it – and if you hanker after what life used to be like? There’s a place for it: Isla Holbox, an island that’s part of the state of Quintana Roo, lying in paradise waters north of Cancun. Make the most of your time here with our guide to the very best things to see and do. 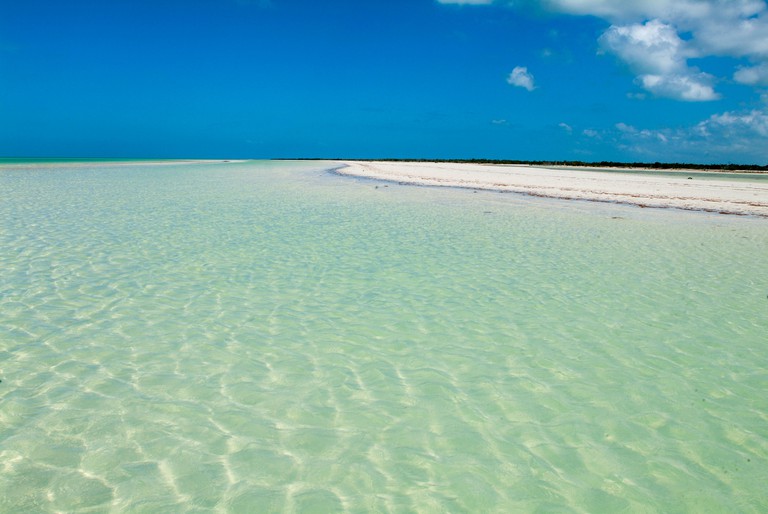 © Stefan Ember / Alamy Stock Photo
The good news? It’s paradise: long, white-sand beaches with more turtles than people; gentle Caribbean Sea and shallow clear-water rivers; no hotels for miles, no sound but the music of the waves and the sea breeze. The Punta Mosquito reserve feels as pristine and primordial as Eden. The bad news? It’s a long walk from the hotel zone – no bikes are allowed in the reserve – and, as the name suggests, it’s heaven for mosquitoes, so bring plenty of citronella.

Light up your life at Playa Punta Coco 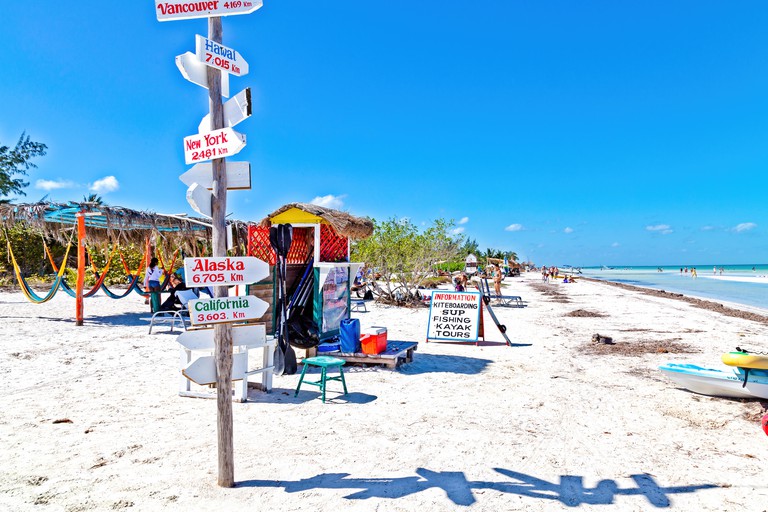 © Jordan Fox / Alamy Stock Photo
By day Coco beach is idyllic, its creamy sands cooled by the shade of coconut palms and glassy shallows. By night it’s magical, as you swim in the shallows and your body glistens with phosphorescent plankton. Even the beach shimmers with light where the waves lap the shore. Coco is in the far west of the island, and is one of the few places in the state of Quintana Roo where the sun sets over the sea. 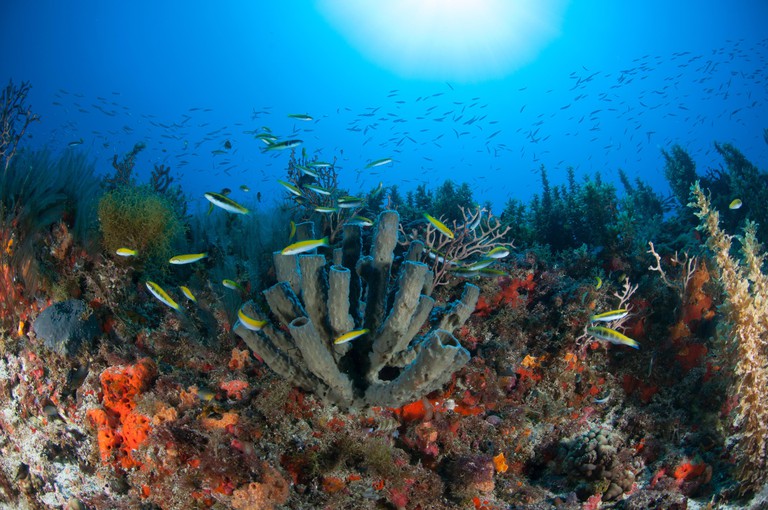 © Cultura Creative RF / Alamy Stock Photo
With wild reefs visited by turtles, mangrove forests and only a few fishermen’s shacks along a huge stretch of beach, Cabo Catoche feels like the coast either side of Playa del Carmen used to be, long before tourists arrived. Separated from the rest of Holbox by wide lagoon inlets and swamps, it can only be reached by fishing boat or organized tour. Both are easily organized in Holbox town. 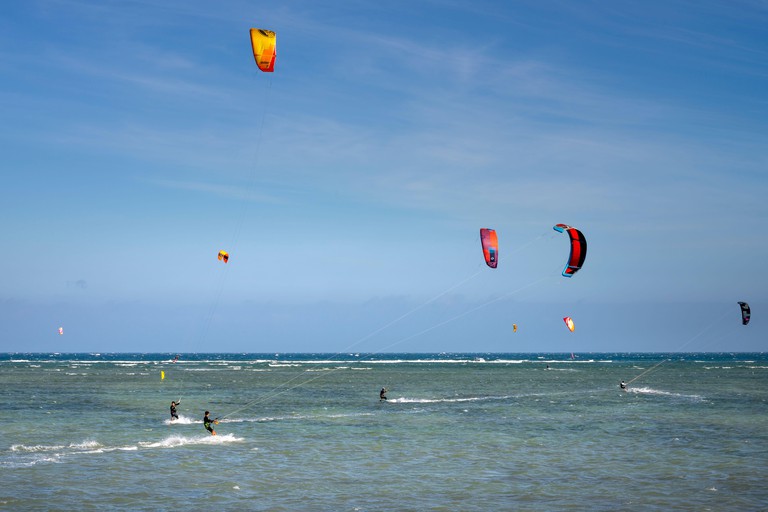 © Quang Nguyen Vinh / Alamy Stock Photo
With lake-calm water, vast expanses of sandy shallows less than a meter deep and reliable prevailing winds, small wonder Holbox is a burgeoning kitesurf destination. There are numerous rental shops in the town, along with lots of English-speaking kitesurf instructors. With reliable wind, Holbox is a brilliant destination for beginners all year round. Experienced kiters should visit between February and April when the gusts are most favorable. 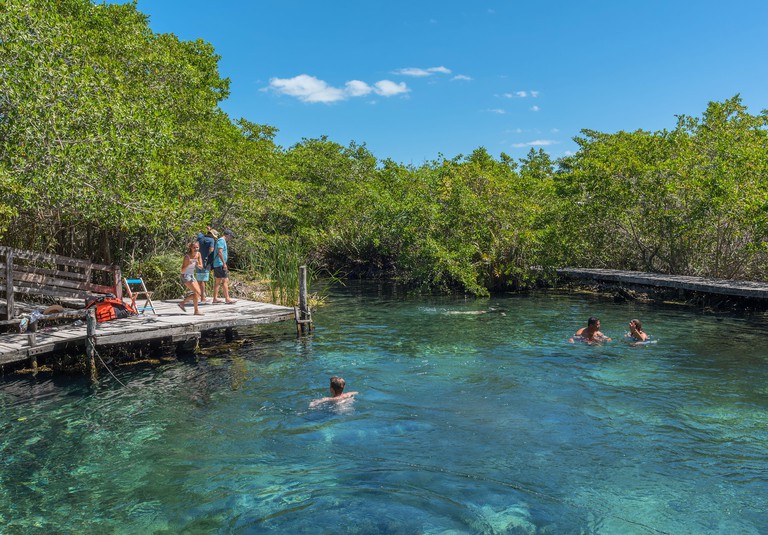 © Rainer Lesniewski / Alamy Stock Photo
The Yucatan peninsula is like a giant pumice stone: honeycombed with caverns, many of them filled with water as clear and clean as mountain air. The mouths of these flooded caverns are called cenotes, and they’re blissful spots for a swim. Even sandy Holbox has a selection, and the easiest to access is Cenote Hoyo Negro Yalahau – a shallow, freshwater lagoon fed by springs and set in lush shrub-jungle.

Picture yourself beside Letras Holbox 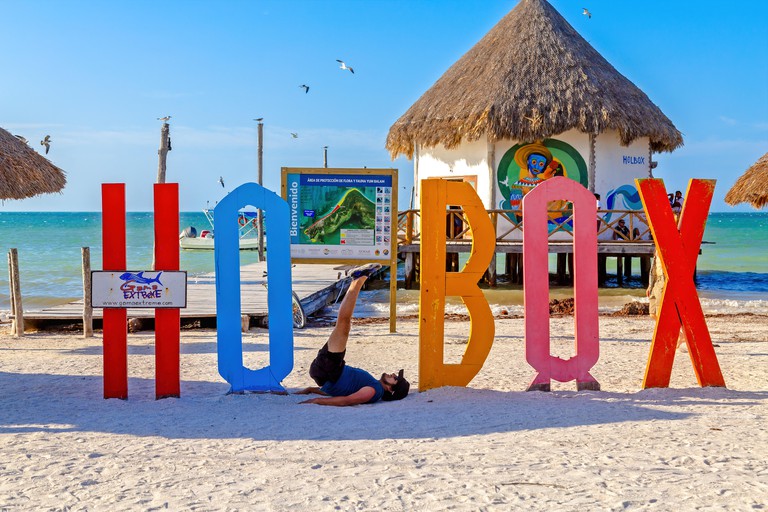 © Jordan Fox / Alamy Stock Photo
Holbox’s favorite Instagram shot? It’s not an empty white-sand beach, or a colorful hammock strung between the trunk of a coconut palms. It’s the letters of the human-height Holbox-island moniker, positioned on the beach right next to the jetty, overlooking the lagoon. The name is missing the letter L, and the photo every new arrival takes is of themselves standing in between the O and the B – follow suit, your body helping to spell out the island’s name.

Hire a buggy and tour the island 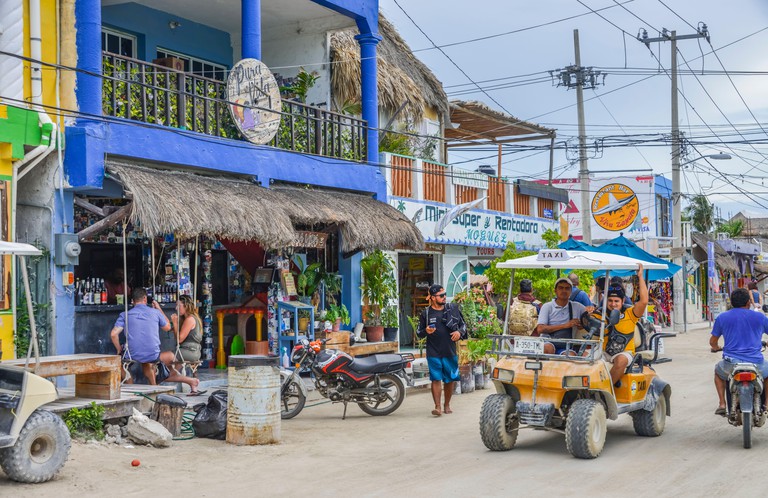 © Schoening / Alamy Stock Photo
Holbox is 26 miles long – it would take you a couple of days to walk the length of it and back. Most visitors see as much as they can, slowly and sedately by bike, but if you’re in a hurry – or if if you don’t feel up to the exercise – you can rent a souped-up golf buggy and drive along the designated dirt roads. You’ll see less of the gorgeous beach scenery but you’ll reach those faraway points more quickly – and without breaking a sweat. 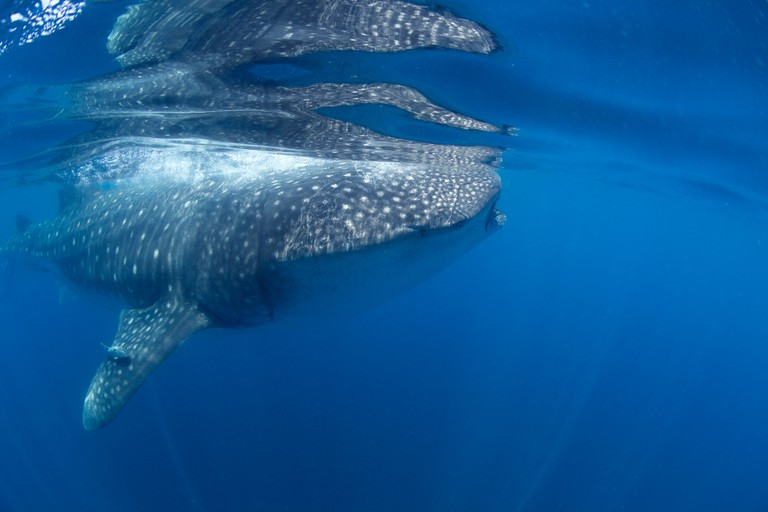 © Kip Evans / Alamy Stock Photo
Between mid-May and mid-September, the world’s largest species of fish swims Holbox’s shallow seas, drawn by an upswell of plankton where the Caribbean meets the Gulf of Mexico. Snorkeling with one of these languorous leviathans is an extraordinary experience. Boats whizz you out beyond the reef and, jumping in, you see nothing at first. Slowly a huge, gently undulating shape drifts in from the blue, its dark back speckled with white, perfectly camouflaged in the play of sunlight and water. This is a once-in-a-lifetime encounter.

Crack open a beer and enjoy the sunsets 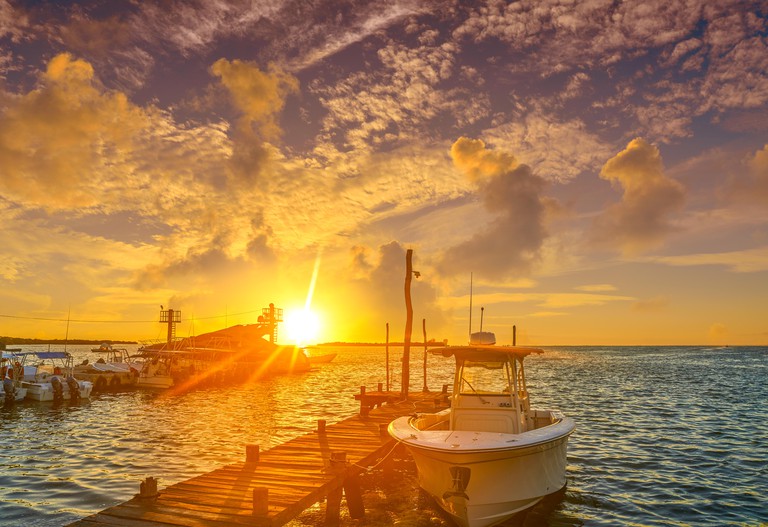 © MISCELLANEOUSTOCK / Alamy Stock Photo
Holbox is the only place in Caribbean Mexico where you can see the sun set over the sea. The place to be is at the island’s far west, right at the southern end of Playa Punta Cocos. Buy cold beers in the village – or at the nearby Club Orion – find a spot on the sand and watch the sun fade from deep orange to cherry red as it sinks over the offshore reef and Caracol Bay. Bring plenty of Citronella – come twilight, the mosquitoes arrive in swarms. 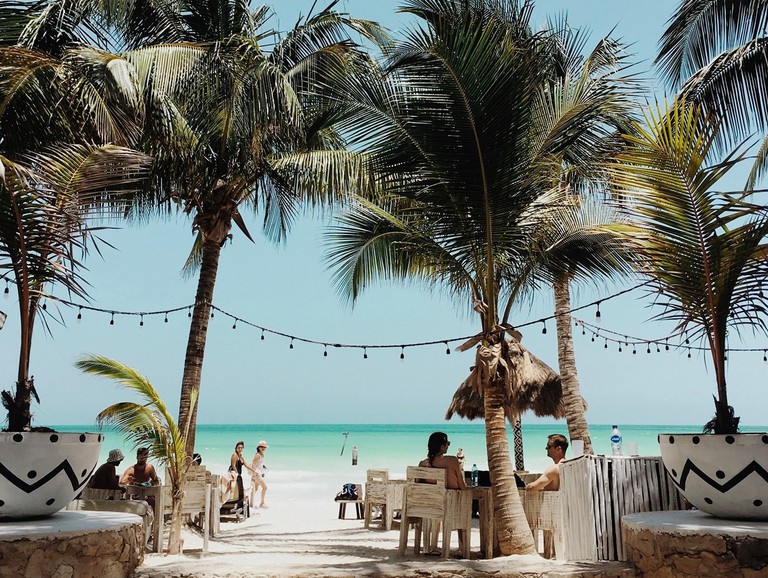 Courtesy of Coquitos Beach Club
Not all Holbox beaches are wild and empty. The main town beach is dotted with guesthouses and seafood restaurants. There’s even a handful of beach clubs – the most popular is Coquitos, under the palms at the end of sandy Canane street. It’s a great spot to chill, icy mojito in hand, either on a shawl on the beach, under the shady palm-thatch parasols or in the club pool. And the bar serves decent all-day seafood and botana (Mexican-football-TV) snacks.

Looking for more? There are countless reasons why you should visit this beautiful island, including the best restaurants and the best bars on offer here. For somewhere to rest your head after all that exploring, check into one of the backpacker or boutique hotels in town. But be aware: there are things you should know before you go.