An Introduction to Mexico’s Narcocorrido Ballads 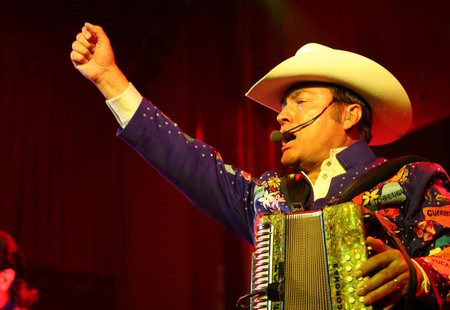 Accordion-heavy narcocorridos, a.k.a. drug ballads, have been accused of glorifying drug culture in a country ravaged by cartel violence, yet it continues to be one of Mexico’s most popular genres. Often compared to gangsta rap, due to the lyrics which recount real life drug runner tales and pay homage to (former) kingpins like El Chapo, narcocorridos originally developed out of the norteño/corrido genre. Here’s your introduction to narcocorridos in eleven songs.

Los Tigres del Norte are easily one of Mexico’s most well-known and successful norteño groups, and have been dabbling in the world of narcocorridos since they formed in the 70s. While there are plenty of excellent examples of narcocorrido songs to choose from in their extensive accordion-heavy repertoire, the one we think offers the best introduction to their style is La Reina del Sur. Released in 2002, this then became the soundtrack to the smash hit telenovela of the same name, albeit performed by Los Cuates de Sinaloa.

One of the most polemic performers of narcocorridos – and that’s saying something – is the Sinaloa-based group Movimiento Alterado, who combine both banda and norteño sounds in their cartel approved music (no, really, they got permission from Sinaloa’s cartel heads to release this track). Known for being uber-violent, even in the drug-reference and gang-violence laden world of the drug ballads, Sanguinarios del M1 references everything from ‘flying heads’ and throat slashing. In fact, Movimiento Alterado is considered one of the early third-wave narcocorrido groups.

Performed by Los Canelos de Durango, Chuy y Mauricio has been widely covered by several other norteño groups and is one of the narcocorrido genre’s most iconic songs, despite its validity been disputed. The corrido recounts the death of the titular Chuy and Mauricio in a shoot-out. As for Los Canelos de Durango, although their founder and accordion player Pepe Ontiveros passed away a few years ago, they continue to make music to this day.

Before his murder in 2006, supposedly at the hands of cartel members, Valentín Elizalde was one of the genres most successful performers and his song A Mis Enemigos had recently been released. However, rumour has it that it was used in a video which challenged the infamous Juárez-based Los Zetas cartel. As revenge, Elizalde was shot dead after a concert in Tamaulipas. While this remains a myth, the song became an instant narcocorrido classic and is essential listening if you want an intro to the genre.

Widely considered the first narcocorrido, the Ángel González original of Contrabando y Traición is a touch different from the narcocorridos of the present day; while the lyrics are still connected to the drug world – it tells of ‘Camelia la Tejana’ smuggling drugs to the US before killing her lover – it was a fictional account. Later narcocorridos developed this trend to discuss real life cases. The song really took off in the 70s, when it was covered by Los Tigres del Norte and even developed into low-budget movies.

Chalino Sánchez was the narcocorrido star of the 80s, but ultimately met his untimely match at the hands of a cartel. After he was found murdered in 1992, it was discovered that he had set his affairs in order, leading some to believe he knew someone was after him. Either way, his legendary status in the genre endures and we recommend Rigoberto Campos as your introduction to Sánchez, a.k.a. El Rey del Corrido (The Corrido King). This song was just one of many that cartels hired him to produce in honour of fallen friends.

Notable for being one of the few, if not the only, female narcocorrido stars, you’ve probably heard of Jenni Rivera, who sadly passed away in a 2012 aviation accident. La Chacalosa was her first big hit and although she was actually a very privileged singer from an influential LA family of music producers and singers, this song claims that her father had raised her ‘to deal drugs’ and run the family business. After her beginnings with those pseudo-narco roots, Rivera went on to develop a makeup range and star in a reality show.

Mis Tres Animales is a thinly veiled reference to the three most-sold narcotics in Mexico – cocaine, heroin and marijuana. While this is by no means Los Tucanes de Tijuana’s only successful narcocorrido (they also have El Chapo Guzmán, which pays homage to the recently incarcerated kingpin), it is one of their most popular, making use of roosters, parakeets and goats as stand-ins in the lyrics for the aforementioned substances. Fun fact: Tucanes member Mario Quintero is supposedly the only major narcocorrido name that writes his own songs.

Known for songs such as Cuerno de Chivo, the title and lyrics of which use a popular slang term for an AK-47, as well as El Gato de Chihuahua, Los Huracanes del Norte are easily one of the narcocorrido genre’s most popular groups. While their name suggests northern roots, the four brothers and unrelated fifth member are actually from Jalisco/ Michoacán, despite currently being based in Los Angeles. They’ve been producing songs since the late 60s and have to date released close to 1000 tracks.

El Grupo Exterminador got their start in the early nineties, going on to release practically one album a year from there on out. While their song El Padre de Todos has proven the most popular on Youtube, and Nuestras Románticas was their biggest chart hit to date, their classic Contrabando en los Huevos from 2006’s album of the same name is the one we recommend. Dealing with the titular character being stopped to have his ‘huevos’ (testicles) checked, the big reveal is that they’re stuffed with ‘white powder’.

Finally, we round off our list with a controversial, if necessary, appearance from El Komander and his song El Regreso del Chapo, based on the kingpin’s first escape. Easily the newest narcocorrido singer on the scene, El Komander has long been the butt of Mexican jokes due to his music. However, his status as an influential narcocorrido singer can’t be denied – earlier this year an El Komander concert in Tamaulipas, one of Mexico’s most notoriously hostile and drug-ravaged states, was cancelled for its promotion of narco culture.