An Introduction To Frida Kahlo In 9 Artworks

Henry Ford Hospital | © libby rosof/Flickr
Frida Kahlo is arguably Mexico’s most famed, iconic artist. From her monobrow to her flower adorned hairstyles, her distinctive aesthetics garnered almost as much interest as her artwork that was dominated by self-portraiture; of her estimated 140 paintings, 55 are self-portraits. While many considered her a surrealist, Kahlo rejected that title, as her work was immensely autobiographical that focused on Mexicanidad (Mexicanness), the culture and tradition of her beloved patria (homeland) and compellingly introspective subject matter. Here’s a chronological introduction to this fascinating artist in nine artworks.

It seems appropriate that the first artwork (which features the original Germanic spelling of her first name) immediately hones in on her relationship with her two-time, much older husband Diego Rivera. Overshadowed by his artistic output in her lifetime, she arguably now holds greater worldwide recognition than he ever did. This piece perhaps explores her conflicting feelings towards him; by exaggerating her small stature and size in comparison to Rivera, she arguably demonstrates her dependence on him, as well as downplaying her artistic talents by depicting Rivera holding paintbrushes while she wears a simple campesina dress. 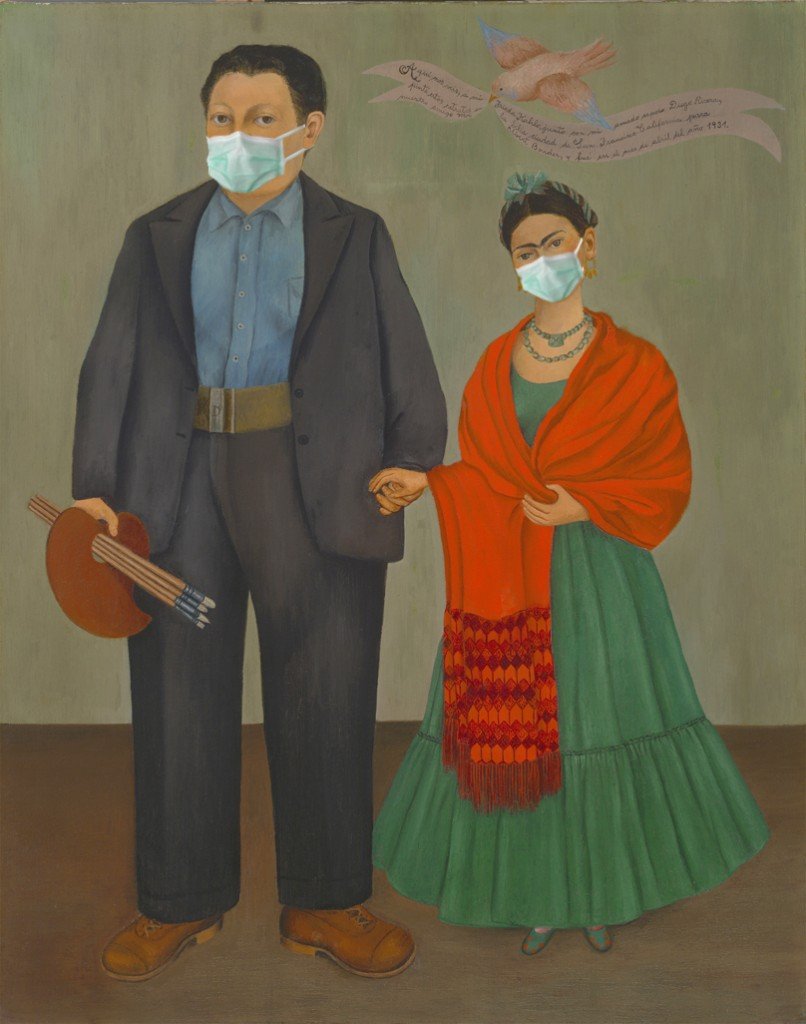 This piece belongs to the private collection of Madonna, a self-proclaimed huge fan of Kahlo. This is perhaps one of Kahlo’s most visceral and shocking artworks, which expresses the turmoil in her personal life at the time of painting. Having just suffered a miscarriage (an experience in itself that would come to define both her life and art), she had also found out her mother was dying of cancer. The rebirth of her own bloody head from between the legs of an unidentified woman is as startling today as it was when it was painted in 1932.

This piece, painted on a sheet of metal in 1932, continues to explore the miscarriage that she suffered while in America. As it became one of the most defining moments of her life, it also came to be a defining feature of her art, and this is perhaps the best known piece which explores this tragedy and suffering. The six supposed umbilical cords tenuously connect her swollen tummy to the fetus of her longed-for but unborn child, a purple flower gifted her by Rivera, a snail symbolic of the slow, painful miscarriage, and a disemboweled female torso, showing the disconnect from her body she felt as a result. 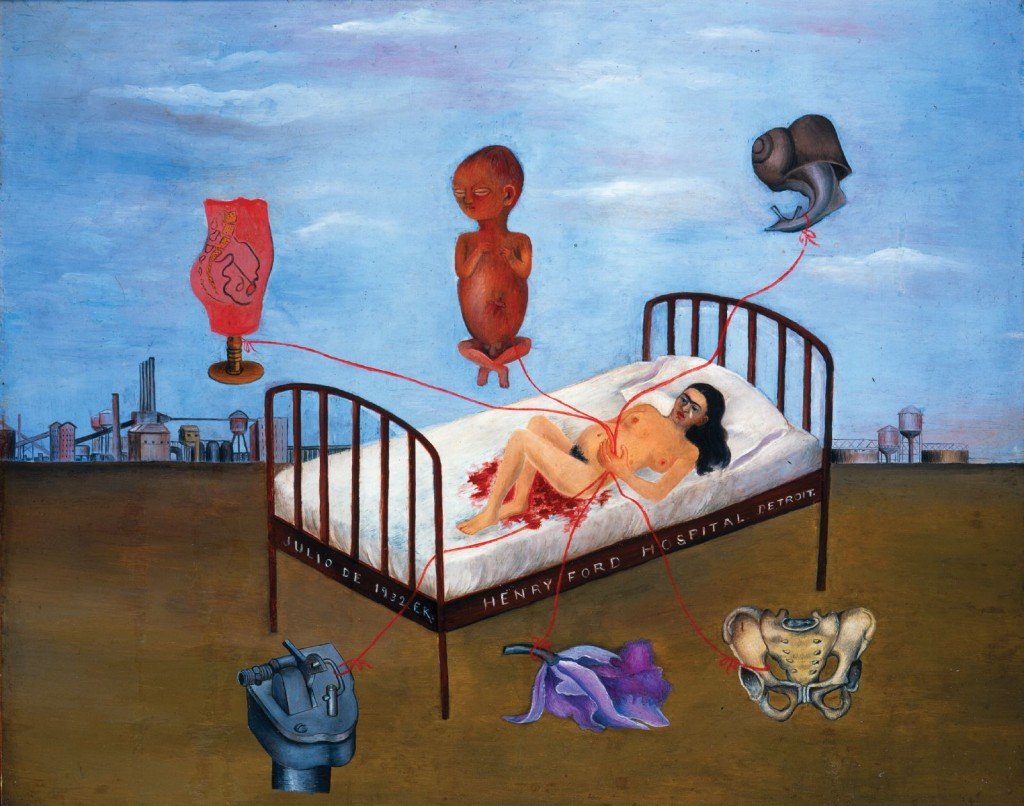 Frida’s relationship with her heritage and her family are repeatedly explored through her artwork, and never more so than in this explicitly familial piece. In this piece her family tree is depicted, with the red ribbon connecting them all and representing her bloodline. Frida herself is featured in the foreground, right in front of the father she idolized, as does the image of a fetus in her mother’s stomach, supposedly Frida herself. Her maternal and paternal grandparents are positioned either above dry land or the ocean, which represents their respective Mexican and German heritages. 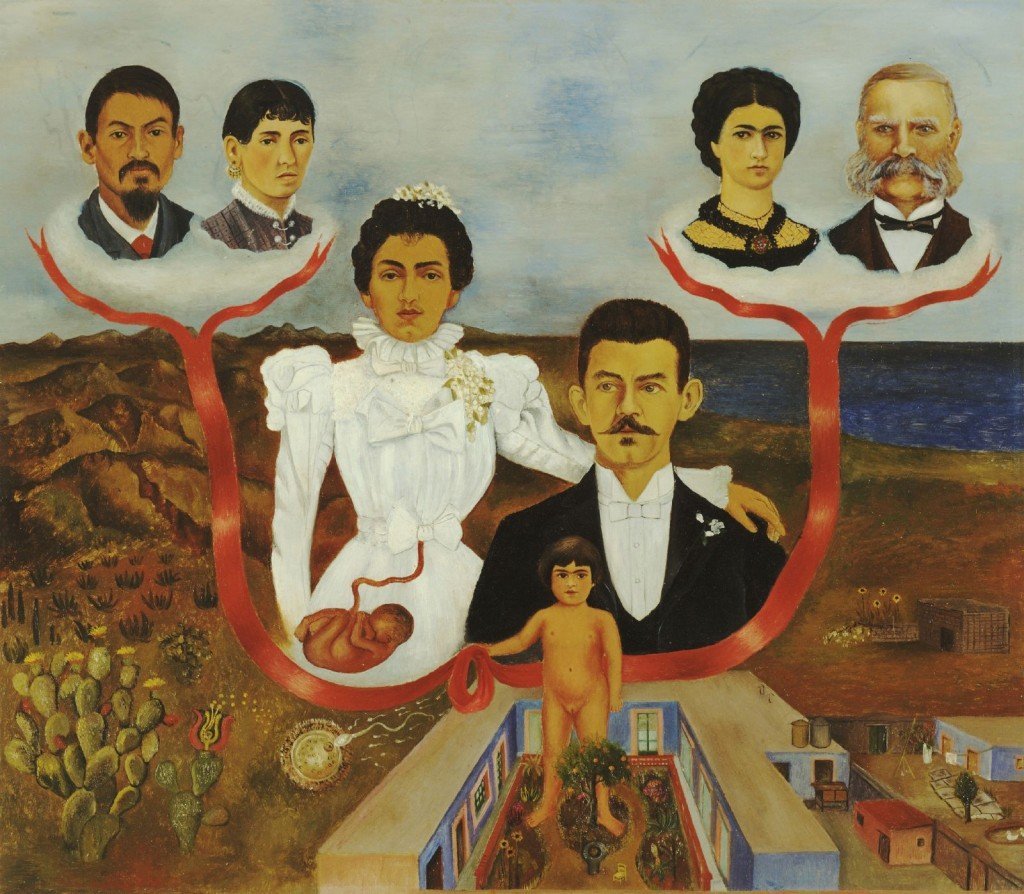 A lesser known Kahlo artwork, The Suicide of Dorothy Hale, depicts – as you might expect – the suicide of the American showgirl and society woman Dorothy Hale, who jumped from the top window of her New York apartment. Her close friend Clare Boothe Luce commissioned Kahlo (who was in the midst of divorcing Rivera for the first time) to paint a portrait, although the resulting artwork is not what she anticipated. A few edits were carried out at the request of Boothe Luce, including the removal of an angel and the lettering which named her as the person who had commissioned the piece. 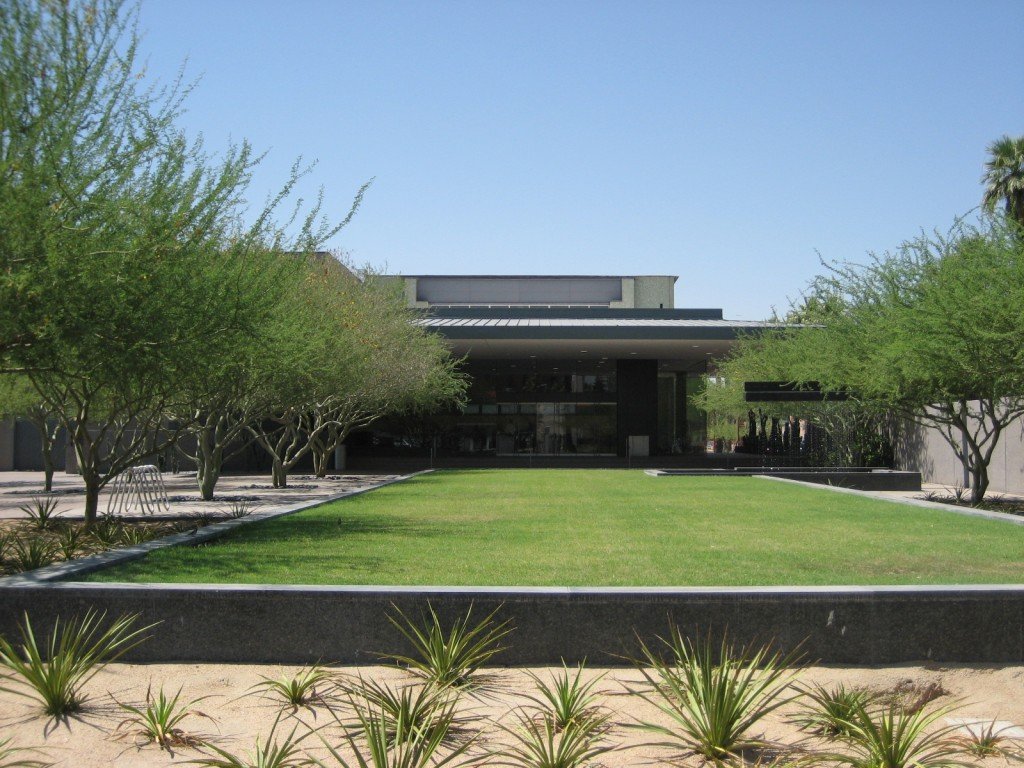 Perhaps Kahlo’s most instantly recognizable painting, Las dos Fridas is a split self portrait which demonstrates the fallout from her divorce from Rivera and the subsequent impact on her sense of identity. The Frida depicted on the right is European in dress and appearance, similar to how she was pre-Rivera, while the Frida depicted on the left is distinctly traditional Mexican. Left hand Frida, the ‘self’ she developed during her marriage, is the one that holds a locket bearing an image of Rivera. The bleeding heart is undeniably symbolic of her pain, as well as being symbolic of Aztec ritual sacrifice. 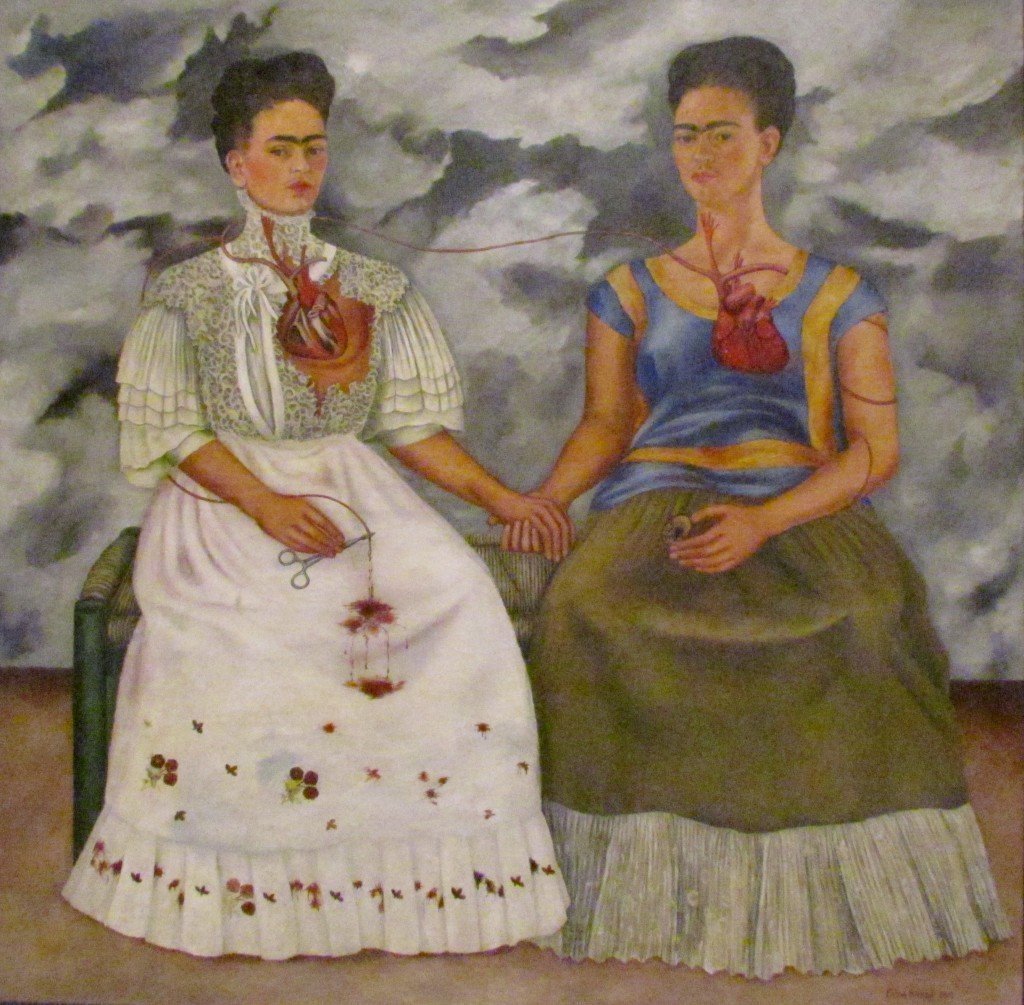 This image of Frida Kahlo is undoubtedly familiar to some, given that it’s been the one most frequently used in pop culture fashion and products. In her 1940 self-portrait, Kahlo stares directly out of the frame at the viewer and wears a crown of thorns around her neck in a scene of self-imposed pain, perhaps representative of her divorce from Rivera. As if that weren’t enough, a dead hummingbird – symbolic of love – hangs from her necklace, while the ill omens of the evil black cat and lustful spider monkey lurk on her shoulders. 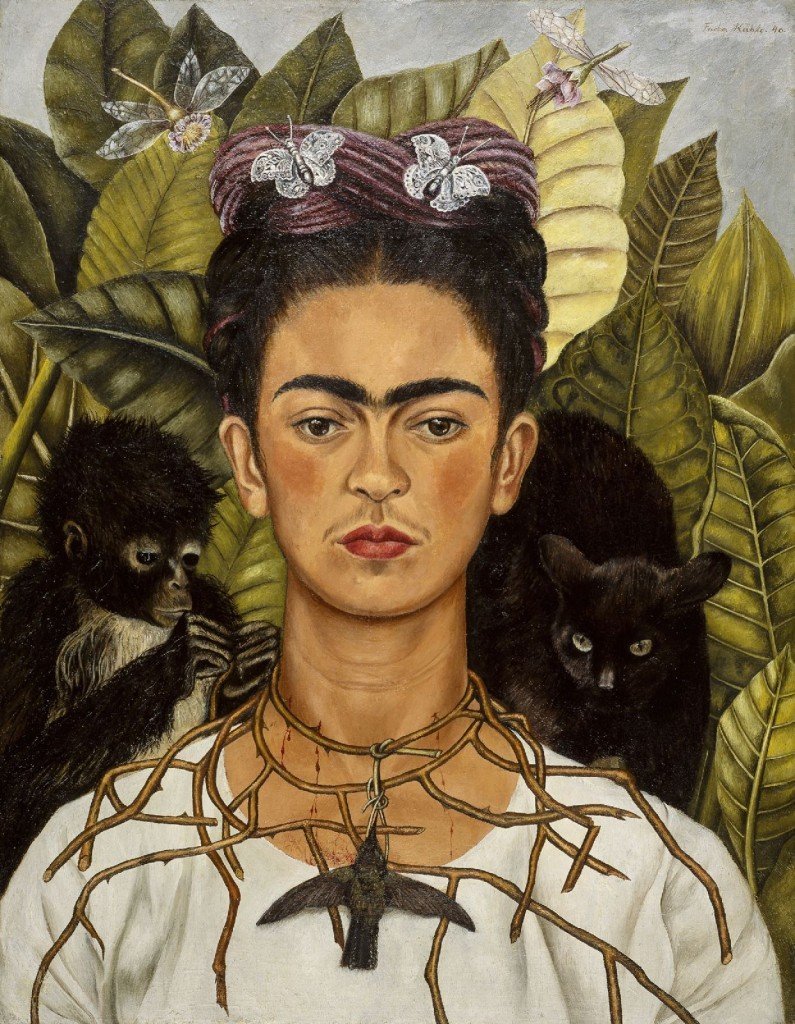 Kahlo’s early life was dominated by trouble, from crippling childhood illnesses to the bus accident which left her in a spinal brace at the age of 18, and these troubles greatly influenced her artwork. The influence is particularly clear in this piece, which depicts her naked torso trapped behind the steel body brace she had to wear during her arduous recovery and the broken spine for which the painting is named. Nails stick out from all over her entire body, including one which appears directly above her heart. Her pain is conveyed brutally in this artwork. 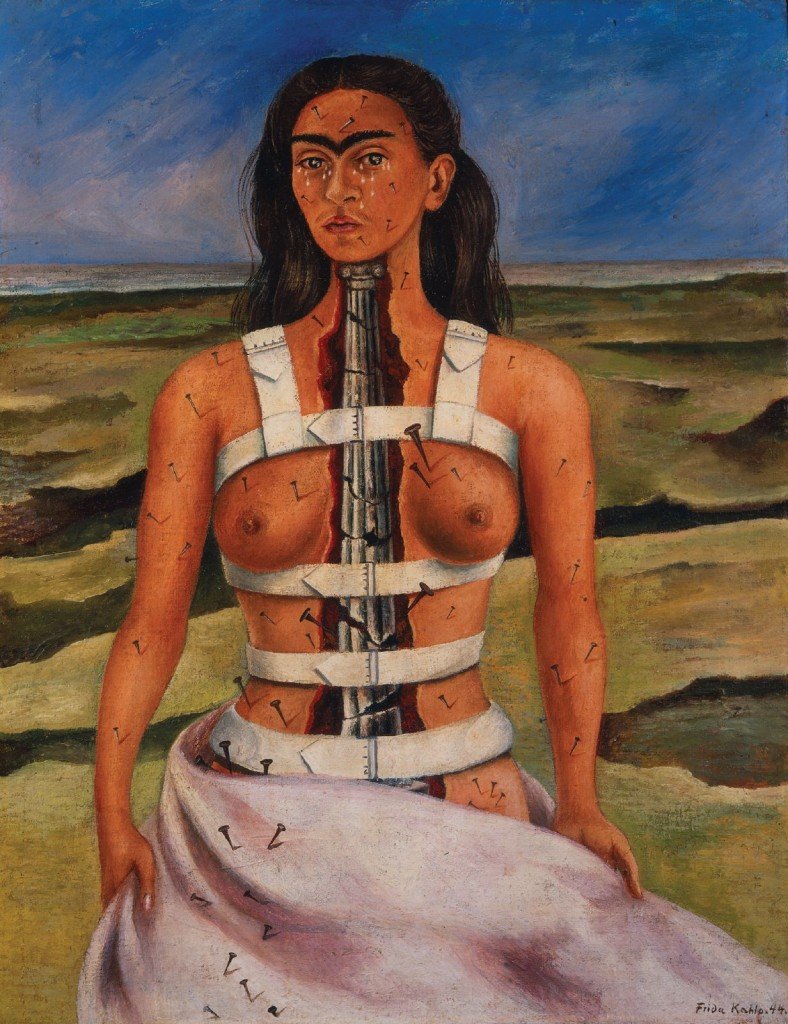 Widely considered to be the last completed piece before her untimely death at the age of 47, the final artwork in our introduction to Frida Kahlo is a conflicting scene. On one hand, vibrant watermelons dominate the piece, with all of their connotations of freshness and youth, as well as the message ‘Viva la vida!’. On the other hand, the underlying meaning of this fruit in Mexican art looms in the background; frequently associated with the Día de los Muertos holiday, they are closely linked to death. 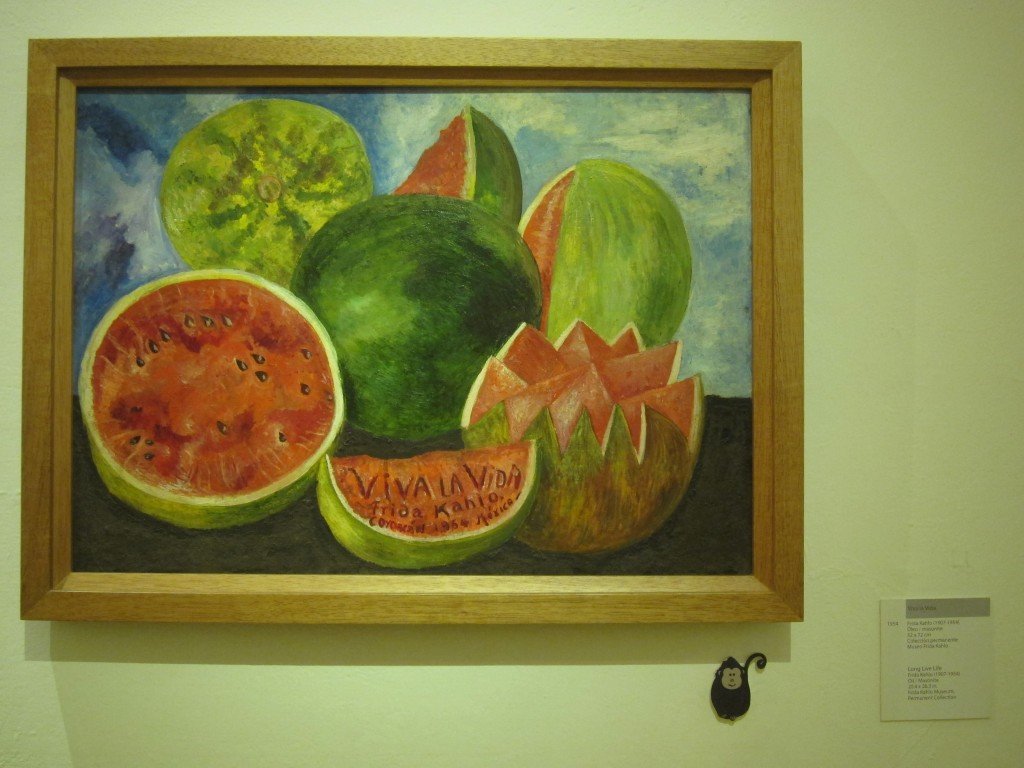