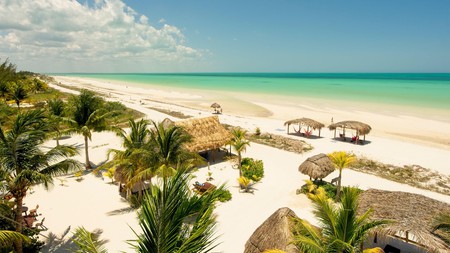 Soak up the sun with a mezcal cocktail on Mexico’s beachy, car-free island of Holbox | © marco boldrin / Alamy Stock Photo

Swim with whale sharks, sip mezcal cocktails and spot wild flamingos on the car-free island of Holbox – just north of the Yucatán Peninsula in Mexico. Discover our top recommendations to make the most of your time in this Caribbean utopia.

The pocket paradise of Isla Holbox – pronounced Hol-Bosh – is a dreamy island alternative to the jam-packed Mexican resorts of Cancún and Tulum. There’s only one village here – a grid of sandy streets, boho cafes, and wooden houses decorated with arty murals – and there are no cars, just golf carts. Whether you plan to wallow in the warm shallow waters, sail around the island on a catamaran or fish for mighty marlin, here is our tried-and-tested guide to visiting Holbox Island.

One thing to note is that Holbox is always tropical. The coolest – and busiest – months are from January to March, when hotel prices are generally higher. If you want to swim with whale sharks, they migrate to the warm waters around the island to hoover up tiny plankton in mid-May and stay until September. The magical shimmering effect of bioluminescent plankton that lights up the wave breaks on beaches such as Punta Coco is best observed around a new moon when nights are darker. The mosquitoes are worst in June when humidity is high, so be sure to bring bug spray if you visit at this time of year. 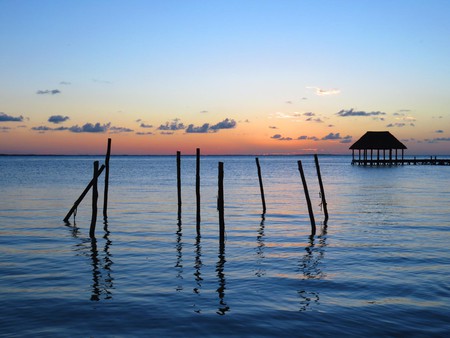 Things to do on Holbox Island

You don’t have to swim with whale sharks – the biggest fish in the world – to fill your days on Isla Holbox. We’ve come up with the perfect itinerary for you, but the best way to start the day here is with a swim in the shallow water of the long sandy beach in front of the main village – or with a morning yoga class before kicking back with a book in one of the hammocks strung over the sea.

Alternatively, head out on a rented bike and seek Punta Mosquito – a pristine beach that’s home to wild pink flamingos. A popular half-day boat trip from Holbox takes you to Isla Pasion (Passion Island), Isla Pajaros (Bird Island) and Yalahau, a mangrove-fringed island with a freshwater cenote in which you can swim. You can also go fishing at Cabo Catoche and make your own ceviche with whatever you catch. The sunsets are spectacular on Isla Holbox – especially from the beach at Punta Coco – but for an unforgettable evening, take a sunset catamaran tour. 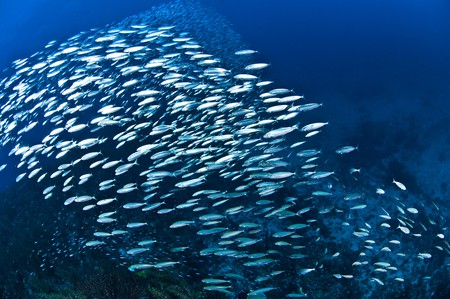 There is a surprisingly large choice of accommodation on tiny Isla Holbox, from upscale resorts with shady palapas on the main beach to backpacker hostels closer to downtown. The growing fame of the island has seen prices rise to Tulum levels in recent years, so budget accordingly. For rustic chic, try the intimate and uber-trendy Punta Caliza, where white walls are set against dark wood interiors and the rooms open onto a triangular central pool.

For a tropical resort experience, book a night or two at Villas HM Palapas del Mar. This family-friendly beachfront property has a rooftop infinity pool, primed to drink in panoramic sea views. Aimed at a younger crowd, the Che Holbox Hostel & Bar has clean, modern dorm rooms. This party hostel is a short walk from the beach but close to town, and has a large pool for after-sun fun. 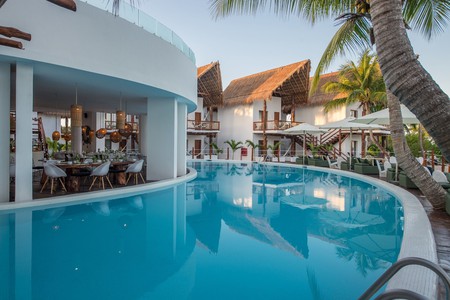 Where to eat on Holbox Island

Holbox Island is particularly famous for its excellent snapper, marlin and seafood. The lobster pizza served to a reggae soundtrack at Roots Pizza a Leña is the stuff of legends, while at colourful A La Chingada, the spicy fish tacos are a must. At night, you could literally drown in cheap margaritas in a downtown bar, but for a more sophisticated tipple, sit under the palms at elegant tapas joint Luuma and try a moreish Mayahuel mezcal cocktail. Soak up the alcohol on the way home with a spicy shredded chicken sope from a street stall in the main plaza.

How to get to Holbox Island

It takes about four hours to reach Holbox Island from Cancún. The majority of visitors come by bus from Cancún to the port of Chiquilá (2.5hrs). There is a ferry to Holbox from Chiquilá every half-hour, which takes 25 minutes to make the 6.2mi (10km) crossing. Once here, you can hire a golf cart taxi to get to your accommodation – or simply walk. You can also fly to Holbox from Playa del Carmen, Cozumel and Cancún with Aerosaab.