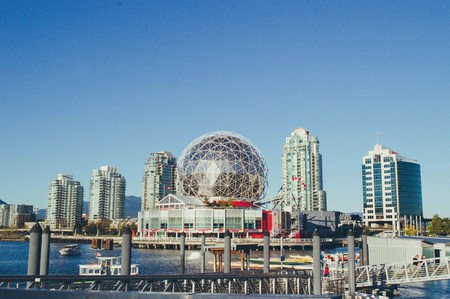 Vancouver is home to some amazing photographers, who specialize in food, landscapes, portraits, weddings, and more. Here are eight Vancouver-based photographers you will want to stalk on Instagram daily. They will inspire you to visit this glorious city and its picturesque surroundings.

In 2014, Rich Won founded Teamchomp, which has since grown into a drool-worthy website and Instagram account. Won collaborates with fellow local photographers to showcase the most delicious food Vancouver has to offer, via the best images possible. This includes piles of donuts or seven scoops of balancing ice-cream and all the noodles. He also does weekly Instagram roundups on his blog, Teamchomp, that highlight the best photos other food bloggers in Vancouver have captured and are tagged with #teamchomp.

Born and raised in Israel, Tal Vardi is a landscape photographer based in Vancouver. Vardi says his photos and videos “were taken in places where I felt things were hard to express by words.” His incredible imagery on Instagram is regularly regrammed by local Instagram accounts, such as Daily Hive Vancouver and Vancity Hype. Vardi has a way of making Vancouver look good from every angle and in every weather condition.

Elizabeth Gadd is just 23 years old, but currently has 173,000 followers on Instagram. She grew up in the Vancouver area and has always loved exploring the surrounding mountains, forests, and ocean. She’s most well-known for her whimsical combination of landscapes with human portraiture. Gadd focuses on self portraits, which usually evoke a dreamy and peaceful feeling. Her work has been featured on The Daily Mail, Telegraph, Bored Panda, Playground, Canadian Geographic Magazine, and several book covers. Her dog, Pepper, even has his own Instagram account with more than 10,000 followers, and regularly features in her photos as well.

Brie and Reuben, the adventurous Canadian team behind Vancity Wild, are the definition of “couple goals.” Their photos usually feature either both or one of them, in the most picturesque settings around the world. Their website and Instagram account (with more than 91,000 followers) exist “to inspire the city-dwellers of British Columbia and beyond to get outside and explore.” They are definitely achieving this goal, one amazing natural landscape photograph at a time.

Yuen just might be one of the best urban photographers in Vancouver right now. The catch is, he’s only 21 years old, and became interested in photography just two years ago. He has a way of capturing Vancouver—and other cities on his global travels—from unique angles and symmetries. Yuen is not just a hobby photographer and Instagrammer, either. He’s already worked with CTV, Simon Fraser University, and Absolut Vodka. He’s definitely a photographer to keep an eye on.

A Vancouver-based photographer and cinematographer, Matt Bourne is a hardworking man. He works as a Floor Director for CTV, but in his spare time takes on creative photoshoots for brands such as New Balance. He specializes in fashion, portraiture, and lifestyle photography. He also shoots documentaries, music videos, commercials, and more. His Instagram account features a lot of street-style shoots around Vancouver—photographing the city in an altogether new way.

Forkheim has added another dimension to his photography lately, thanks to his picturesque drone images. His Instagram account includes drone shots from across the greater Vancouver area, including West and North Vancouver. Forkheim is not only experienced in landscape photography, as his nighttime urban photos around Vancouver’s downtown area are also incredible.

Barkman is a triple photography threat. Although she works as a wedding and commercial photographer in Vancouver, it’s her landscape photographs on Instagram that have captured more than 58,000 followers. She says: “I want people to look at my photos and feel them. I want them to be transported into each moment and soak up the beauty around them.” This is easy when the photographs feature the beautiful natural surroundings of Vancouver and British Columbia.