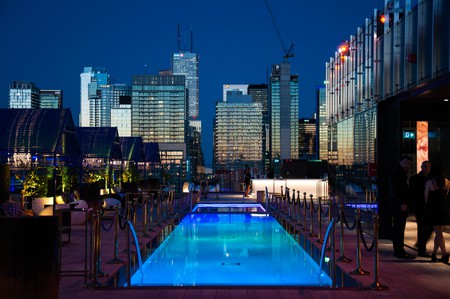 Calling all night owls: this is a list of Toronto’s best clubs, dance halls and dive bars, according to events organizer Eric Boudreau. From sneaker-appropriate EDM hotspots to see-and-be-seen venues, it’s time to cut a rug.

While Toronto is home to a host of fun things to do during the daylight hours, at night is when the city turns up the heat.

For starters, the city’s aptly named club district (centered around the intersection of King Street and Spadina) is home to a number of solid nightclubs – all with decent drinks, bottle service in the usual price range and gussied-up dress codes. There are two ways you can approach this area: you can book a booth and hold court at one venue all night or see where the evening takes you and hop from club to club.

If Top 40 isn’t your cup of tea, head westward and hit up one of the cool-kid-approved spots on Dundas West. T-shirts and sneakers are accepted – no, recommended – here.

Toronto’s party scene isn’t just for the after-hours joints. Follow the lights down a Kensington Market alley on a sunny Sunday afternoon, and you’ll find the sounds of soca and picnic table dancing. Head to Polson Pier’s Cabana on any warm weekend for an exuberant pool party, complete with champagne service and world-renowned DJs.

As your guide to the city’s past-dark scene, Eric Boudreau – a bona fide creature of the night who schemes up events for big-name beer brands like PBR – has mapped out his guide to getting down. While many of his weekend nights are spent scouting for new venues for the brand’s concert series, many of the spots below – Cold Tea, Soso Food Club and Camp 4 in particular – are where he raises a glass with his friends. “They have authenticity.”

And after you’ve got your coat and last call has been rung, why don’t you make a pit stop for some late-night bites before heading home? This is Canada, after all, where there’s no better cherry to top off your night than a steaming plate of poutine.

SoSo put its stamp on the city through its snap-happy, super-Instagrammable decor (think pastel walls and neon and black lighting). A full menu of reimagined Chinese cuisine – soup dumplings are a must – makes a strong case for stopping in for dinner as well. “Don’t be fooled, though,” advises Boudreau. “It also serves some of the wildest parties on Dundas – mostly on Saturday nights.” Once the diners slink out, the late-night crowd files in to groove to the line-up of local DJs. “Half-price wine on Wednesday is pretty fun, too.”

“There’s a distinct difference between Camp 4 on Friday and Saturday,” explains Boudreau. “Fridays at Camp 4 have become a staple for DJs and the local music industry.” The unassuming Dundas West spot is very much a neighborhood watering hole – it’s a stellar place to grab a late afternoon beer but doubles as an excellent place for a high-energy weekend night. “My guy DJ Dirty Dale spins most Fridays and is the king of disco – I’m not a big dancer, but the guy knows how to make you move.” The small space gets crammed quickly, so come early. 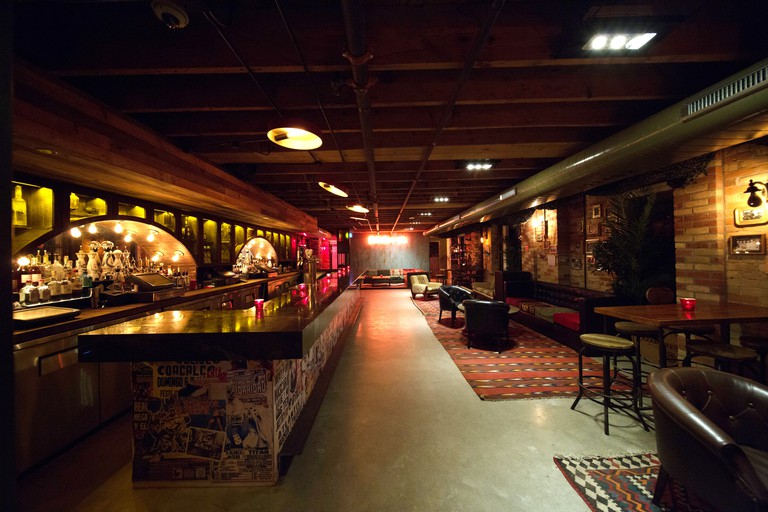 Escobar is located at the back of Baro, a Latin American restaurant on King West | Courtesy of Escobar

Dubiously named after one of the cruelest drug kingpins in history, Escobar is a clubbier take on a speakeasy. Utter the password to the doorkeeper (or just ask nicely) at the back of Baro, a much-loved Latin American restaurant on King West, and you’ll be ushered into Escobar, which keeps the Latin American thread of Baro alive (sangria and margaritas are standouts, along with Latin-inspired bar snacks). However, expect Top 40 tunes here. The “Pablo Loves You” neon sign that lights up the room with a steamy red glow has become famous on Instagram.

The name stems from the Chinatown tradition of serving beer in teapots after the last call through the coded order of ‘cold tea.’ Wind through a shuttered mall in Kensington Market and spot the red light – it’ll indicate the hidden entrance to Cold Tea. “This place is the epitome of summer in Toronto,” says Boudreau. Friday and Saturday nights are a ball – an all-night dim sum menu complements tasty cocktails – but the climax is Sunday afternoons when the backyard patio opens up for a daytime dance party. Everyone in the crowd (and many atop tables) bounces to ’90s R&B and soca afrobeat. “It’s tough to get in, and sometimes waiting in line can be daunting. But when you’re in, it’s a non-stop party.” Cold Tea only accepts cash, so come prepared to avoid ATM fees.

CODA checks all the boxes as a stellar bet to dance the night away. It has a large dance floor, a top-of-the-line sound system and a host of notable DJs who steer away from the Top 40 tropes. The vibe here is dance, so expect high-caliber techno and a wide range of EDM tracks. Unlike many clubs in the city, the dress code is laid-back; a T-shirt will do the trick just fine. CODA stays open until 5am, so consider opting for a table as a respite. 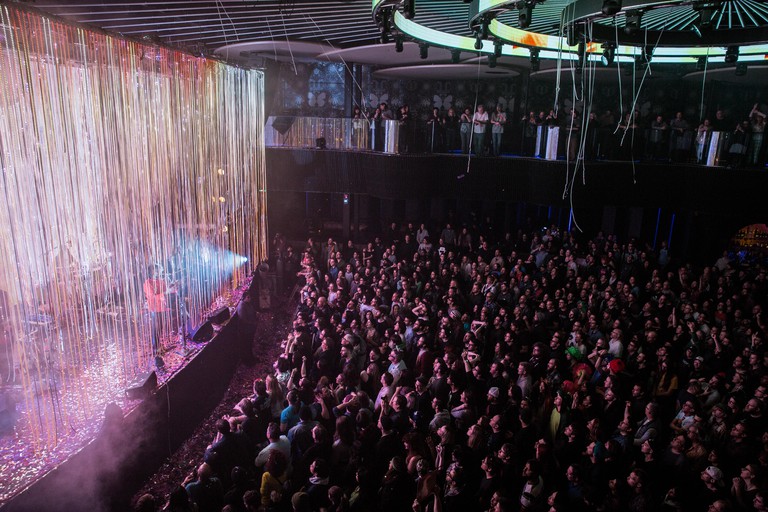 The Flaming Lips take to the stage at Rebel, one of the biggest nightclubs in Toronto | © Bobby Singh / Alamy Stock Photo

Rebel is one of the largest entertainment centers in the city, but that also means its one of the busiest. The 45,000-square-foot space can hold 4,565 patrons at a time, and that’s not even considering the capacity of the adjoining pool bar, Cabana. But with big crowds come over-the-top amenities; there’s a 65-foot stage, stadium-worthy visuals and light features, and top-notch Saturday night dance parties. It’s a fair cab ride away from Downtown (the spot sits on Polson Pier), so plan your evening accordingly and keep an eye on the upcoming line-up. Everyone from Lizzo and Khalid to Sting and DeadMau5 has graced the stage.

Bovine Sex Club for rocking out in a dive bar

Set behind a facade of apocalyptic bicycles and found objects, this no-fuss joint slings dirt-cheap drinks to the tunes of live ska, punk and metal. The Bovine Sex Club has been a Toronto institution for well over 20 years, and for good reason. The cover fee never passes 10 Canadian dollars ($7.50), Jägermeister is on tap and beer is cold. Check the line-up before you go as any given night can bring anything from a local ska band and a retro DJ to an NXNE after-party. A relatively new rooftop patio is the place to cool off between sets (preferably over a tiki tipple off the tropical cocktail list).

EFS’s cozy interior – monochrome leather couches, a chrome bar and glimmering exposed-bulb lighting – makes it feel as if you’ve blagged an invitation to a hip celebrity’s Hollywood Hills home. Stakes are high on the weekend; expect long lines and packed spaces, with well-dressed women getting down to R&B and a smattering of trap. Wednesday ‘Industry’ nights are the real draw, with fewer lines than Fridays and Saturdays and a more relaxed crowd. In the summer months, the private cabanas on the rooftop come equipped with hookahs and are spacious enough for the full squad.

Lavelle, a rooftop club for celebs and high rollers 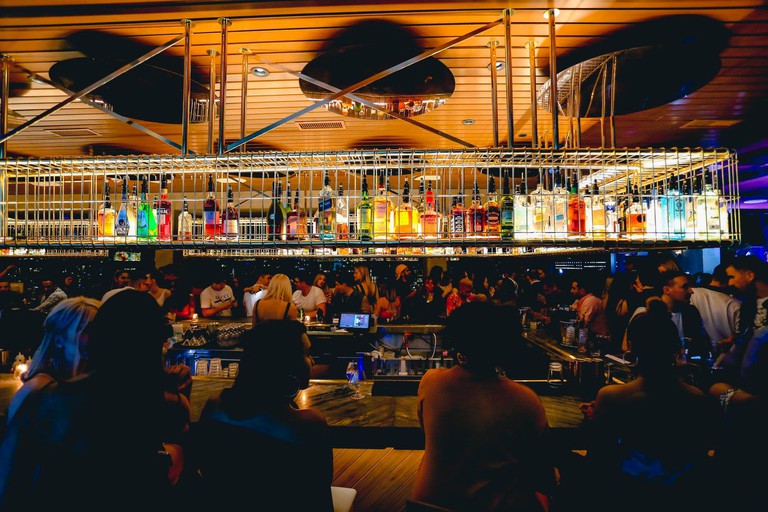 Lavelle is for suited and booted EDM lovers | Courtesy of Lavelle

Summer in Toronto is fleeting, so residents make the most of the weather by spending every possible second outdoors. Swanky Lavelle is at the top of the rooftop pecking order. It sits 16 floors above the city on top of a very pricey condo building and boasts 360-degree views and an elegant poolside cabana. The cocktail menu is thoughtfully created, so opt for something more interesting than a vodka soda. If you’re famished, chef Daniel Ken whips up Brazilian and Japanese dishes. Top 40 and EDM make up the soundtrack here, and the pro move is to don a swimsuit and swing by the Friday pool party. During the Toronto Film Festival, expect the crowd to be dotted with a familiar celebrity face or two.

Lost and Found for hip-hop and weekday parties

Nightclub, Beer, Wine, Cocktails, $$$
Facebook
Email
Twitter
Pinterest
Copy link
Share
Map View
Inspired by the phrase “not all those who wander are lost,” Lost and Found is the place to go to bump and grind to some of the best hip-hop in the city. Every Monday, Thursday, Friday and Saturday, you’ll find cool crowds (off-duty models, Drake and Justin Bieber are all frequent figures) being served by roving sparkler-laden bottle girls pouring Ace of Spades or Hennessy aplenty.
Open In Google Maps
577 King Street West, Old Toronto Toronto, Ontario, M5V 1M1, Canada
+16479955772
Visit Website
Give us feedback

Bar, Pub Grub, $$$
Facebook
Email
Twitter
Pinterest
Copy link
Share
Map View
For a club experience beyond the King West strip, slip into Pravda Vodka House. The St Lawrence spot is an ode to all things vodka – right down to the bust of Vladimir Lenin that greets guests by the entranceway. In the early evening, Pravda is a lounge where guests can sip their way through over 100 vodkas from around the world. On the weekends, the atmosphere kicks up a notch, with dancing crowds flanked by burlesque dancers and aerialists. A few guests will even have the opportunity to step into the back freezer (there are fur stoles on hand to keep you warm) for a guided tasting (or shot, depending on your mood) of ice-cold vodka.
Open In Google Maps
44 Wellington Street East, Old Toronto Toronto, Ontario, M5E 1C7, Canada
+14163660303
Visit Website
Visit Facebook page
Give us feedback

Crews and Tango for drag shows and karaoke in The Village

Often referred to simply as ‘Crews,’ this multistory Victorian house is home to the city’s biggest and best drag shows. Expect an explosive combination of drag shows and crowd-fueled karaoke seven nights a week, led by a host of charming drag queens. Crews underlines inclusivity, so all guests are welcomed with open arms regardless of creed.