The History of Toronto’s Campbell House in One Minute 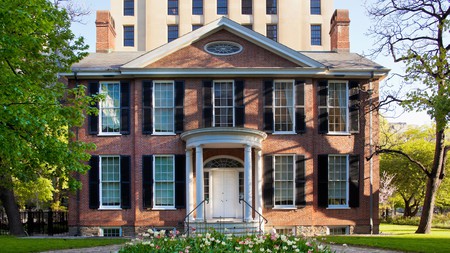 The Campbell House, now referred to as the Campbell House Museum, is Toronto’s oldest remaining home from the original site of the Town of York and one of the last buildings in Toronto that displays Georgian architecture. Discover its fascinating history with our one-minute guide.

Campbell House, built in 1822 by Judge William Campbell and his wife Hannah, was designed in Palladian style, a popular trend during the Georgian era, which features Italian, Greek and Roman elements like symmetrical windows and doors, columns in the entry and ‘showy’ elements to give the appearance of wealth. Because William and Hannah’s children were grown and out of the house, they designed the home for entertainment and their own comfort. In 1834, William Campbell passed, and the house was given to his wife, Hannah. She resided here until her passing in 1844, when the property and everything in it was sold at an auction, with the profits going to her family.

During the 19th century, the Campbell House was used as a private residence, and by the 1900s, it housed a series of businesses including offices and factories. The house, without the proper care, fell into a state of decline and eventually was threatened with demolition by its latest owners, Hallmark Greeting Cards, to make way for a bigger parking lot. The house was saved by the Advocates’ Society in 1972, who moved the building from its original location at Adelaide Street and Frederick Street to its current location at Queen and University. The move required help from the Toronto Transit Commission, as maintenance trucks helped carry a 270-tonne-force structure northwest for 1,617 meters (1mi), and crowds watched in awe from the closed streets downtown. The building was restored after being moved, incorporating 19th-century artifacts and furniture, opening that year (1972) to the public.

Today, the museum is owned and operated by the City of Toronto, serving as a museum, art gallery, outdoor exhibition space and club for the members of the Advocates’ Society. The museum also hosts group and educational programs along with guided tours. The grand gesture to move this home to preserve its 19th-century architecture was a turning point for Toronto architecture: it would set the tone for future historical landmarks when they were threatened with demolition, inspiring Toronto locals to save these precious historical landmarks.