A Budget Traveler's Guide to Toronto 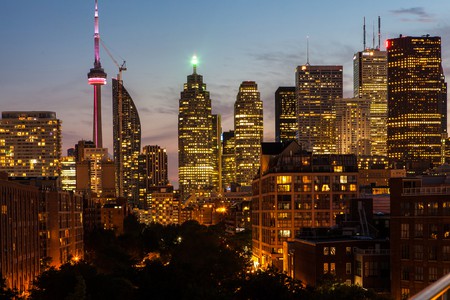 In Toronto on a tight budget? Although the city might not compare to other North American urban centers such as New York when it comes to cost of living, Toronto is undoubtedly among the most expensive cities in Canada—the other contender being Vancouver. Here’s a quick look at what you can do around the city when you want to avoid breaking the bank.

Visit a museum or art gallery

You’ll find that many of Toronto’s internationally renowned museums offer free admission during certain hours. Starting with the Art Gallery of Ontario (AGO), which features a diverse collection of Canadian and international contemporary and historical masterpieces, you can view the permanent collection at no charge every Wednesday from 6 to 8:30 p.m. You can also try the smaller but just as dynamic Museum of Contemporary Art Toronto Canada. Similarly, both the Bata Shoe Museum and Textile Museum of Canada both offer pay-what-you-can hours: Thursdays from 5 to 8 p.m. for the former, and Wednesdays from 5 to 8 p.m for the latter. If you’re more of a history aficionado, you can go to the Royal Ontario Museum (ROM) on Fridays at a reduced admission price of $12.

Go to a market

To really immerse yourself in Toronto’s diversity, head over to St. Lawrence Market or Kensington Market. St. Lawrence is in a historic building that houses dozens of unique vendors—from butchers and bakers to fishmongers, fruit stands, and more. In contrast, Kensington Market is a neighborhood that borders Chinatown and the lower Annex around the University of Toronto. Full of inviting cafés and food joints, vintage stores, and restaurants, Kensington is fun just to walk around in and do some good people-watching—even if you’re not planning to buy anything.

Markets in Toronto, ON, Canada

I figured it was about time I see what the fuss is about.

Despite being the largest metropolis in Canada, Toronto contains incredible opportunities to connect with nature. In the west end, close to Bloor West Village, you’ll find High Park, the city’s largest public space, with a large pond, a small zoo, gardens, and lovely walking paths. Enjoy a picnic on the green slopes overlooking Grenadier Pond. If you prefer to be closer to downtown, Trinity Bellwoods Park along Queen West is a popular destination for hipsters and families alike. You can also explore Toronto’s extensive ravine system, which operates as a network of parks and green spaces marked by numerous trails for hiking, cycling, and strolling during summer, and cross-country skiing and snowshoeing during the winter.

Green Spaces in Toronto, ON, Canada

Another must-see is the Evergreen Brick Works, which is one of the city’s “adaptive reuse” urban planning success stories. Formerly a neglected industrial site, the Brick Works have been repurposed as a community and environmental center that showcases sustainable design. The Brick Works hosts a variety of local events and workshops and hosts a weekly farmers’ market. This spot is free to explore, and the historic site also contains a discovery area for kids, art exhibitions, recreational paths, and skating trails during the winter.

The extent of Toronto’s beach areas might come as a surprise, but there are over three kilometers (1.9 miles) of sandy shores and recreational areas along Lake Ontario. The Beaches in the city’s east end offers an almost small-town atmosphere during the summer months, where you can lounge, sunbathe, play beach volleyball, saunter along the boardwalk with an ice cream cone, and even swim if you dare. The area is also home to numerous cafés, restaurants, and charming boutiques. You’ll also find beaches at the Toronto Islands, a short and inexpensive ferry ride just minutes from the downtown core. Along the lakeshore, you’ll also find Toronto’s Harbourfront Centre, which has long been a hub for fun and free cultural festivities for years. During the summer, Harbourfront hosts popular festivals themed around food, music, dance, theater, literature, and more from diverse world cultures.

Beaches in Toronto, ON, Canada

Happy Birthday Canada! Join us for a #CanadaDay celebration perfect for the whole family. (Did we mention we have fireworks?)

The good thing about scoping out Toronto’s cheap eats is that they also reflect the diversity for which the city is celebrated. You can try Ghazale Middle Eastern and Vegetarian Foods, which has been around since 1995, has several locations throughout the city, and is open late. You can grab most sandwiches, plates, and shawarma for $12 or less.

A Kensington favorite for the past 15 years, Jumbo Empanadas serves up thick and delicious empanadas filled with beef or chicken, hard-boiled eggs, olives and raisins for $4.50 each—or $1.50 if you go for the mini options. If the lines are too long, you can hop next door to Emporium Latino, a Latin grocery store that also serves pupusas, tamales, empanadas, and other Latin American eats freshly cooked for under $5.

On the other side of town, you can head over to Messini on the Danforth, which has been at the heart of Toronto’s Greektown neighborhood since 2002. It’s surprisingly affordable, given the classy décor. You can order either chicken or pork on a thick pita with tzatziki, vegetables, and some fries for just under $5, and the meatless version is only $3.50.

Located in Chinatown, Nguyen Huong is a banh mi hot spot that serves up very affordable Vietnamese-style sandwiches. Fillings include lemongrass sausage, shredded chicken, meatballs, or a vegetarian version. You can get a delicious grab-and-go meal for under $5 here—if you have the patience to wait out the busy lunch-hour crowd.

The Planet Traveler is a green hostel located in a renovated century-old building on College Street and is spacious and includes a cozy lounge and a rooftop bar. The hostel was also Toronto’s first joint geothermal project, and rooftop solar panels heat the building’s water. They also incorporate photovoltaic electricity. You can stay in a dorm there for approximately $38 per night.

Staying at the College Hostel in Kensington Market means that you can be right in the thick of one of Toronto’s most eclectic neighborhoods while also having easy access to the rest of the downtown core. The hostel has 140 beds in total, which makes it one of the larger hostels in the city. Dorms cost $25 during the winter and $40 in the summer.

The Only Backpacker’s Inn

While not as centrally located as the above two options, The Only Backpacker’s Inn, in the city’s east end at the Danforth and Donlands, sits above one of Toronto’s best beer halls: The Only Cafe. Dorms cost around $30 per night, which includes a solid breakfast.