A Brief History of the CN Tower 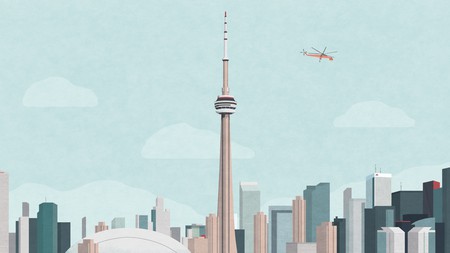 There was a time when communications towers were like piercings for cities. Huge spikes stuck into the centre of fading downtowns, intended to produce a striking effect of modernity, a dramatic skyline and perhaps a revolving restaurant in which slightly queasy diners could literally look down on their fellow citizens. Toronto’s CN Tower was the biggest, and perhaps the best.

When the CN Tower opened in 1976 it was the tallest freestanding structure in the world, its elegantly engineered concrete shaft supporting the doughnut-shaped Space Deck (now called the SkyPod) and a pointed antenna, rising 1,815.5 feet (553.3 meters) above Toronto. The building only lost that record when Dubai’s Burj Khalifa surpassed it in 2007. The CN Tower had had a good run.

The tower was built on former railway lands, and the letters in its name come from the Canadian National Railways, on whose land and with whose money it was built. But its beginnings were not auspicious. A major redevelopment of the area around it (of which the tower was supposed to be the centerpiece) fell through, and for many years the structure was left isolated in an awkward setting between the city and industrial backlots. Slowly, however, the city developed around it until the tower was fully absorbed as a kind of proto-Google Maps pin to show tourists where to start.

The design was the work of Australian-born architect John Hamilton Andrews with Roger du Toit, and structural engineers RR Nicolet and the Webb Zerafa Menkès Housden Partnership. It was minimal and elegant, a work of extruded Brutalism, a style more usually understood as squat and powerful, here stretched out into a slender, tapering needle. The shaft is arranged in a symmetrical Y shape with three concrete fins, while a hexagonal core houses the services and elevators. There was a theatrical moment during its construction when a Sikorsky S-64 Skycrane helicopter (nicknamed ‘Olga’), which had been bought as surplus from the US Army after the Vietnam War, was brought in to put the final sections of the antenna into place.

Perhaps the building of a big appendage reflects Toronto’s self-confidence problem. It’s the biggest city in Canada but not the country’s capital, and so close to the original skyscraper city Chicago. By the 1970s, Toronto was looking increasingly generic, as its downtown glass towers made it look like just about every other North American city.

Seattle had its Space Needle, Moscow its Ostankino Tower (which had been the tallest until the CN Tower stole its thunder), Shanghai its Oriental Pearl and Tokyo its Skytree; virtually every Asian and Gulf city followed suit, as did Berlin and Prague. The record-breaking communications tower went from being a marker for the city to an everyday necessity.

Toronto eventually employed its generic quality to great effect, popping up in the movies where it doubled for New York, Chicago, Los Angeles and many other places. After the building of the CN Tower, filmmakers had to be careful not to get this most distinctive building in shot. 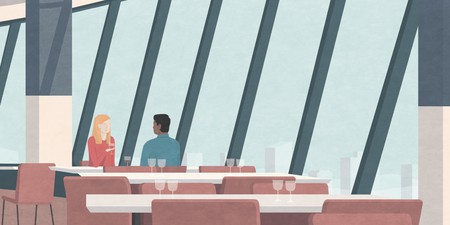 The CN Tower still has that cipher for sophisticated ’70s civility – its rotating restaurant. A curious breed that emerged in the 1960s, the revolving eatery was part of the search for a new kind of restaurant, high-tech and hyper-modern, a 20th-century replacement for all those gilded grand dining rooms in the French style. The first was atop a Hawaiian shopping mall in 1961, and then its architect, John Graham, was commissioned to build one at the top of the city’s new Space Needle in his home town, Seattle, for the Century 21 Expo the following year. Even London had one, the Post Office Tower (now the BT Tower), though it was closed to the public after an IRA bomb threat and never reopened. Las Vegas has one, of course, as does Cape Town, overlooking Table Mountain; there are others in Sydney, Tokyo and Munich. But who could refuse Toronto’s gently spinning offer of regional Canadian cuisines and wines from the “cellar in the sky” at the 360? Or even a dangle off the rim on an EdgeWalk?

The communications tower was once the architecture of the future, an ambitious, structurally adventurous and elegant attempt to develop an archetype for the information age. Somehow, the rest of their host cities never caught up, which has left them looking like markers from a lost future, visions of how the city might have been. And, in an era in which ’60s and ’70s architecture is back in fashion and yet all too readily demolished, the CN Tower looks like a magical survivor.