The Best Things to Do in Abu Dhabi 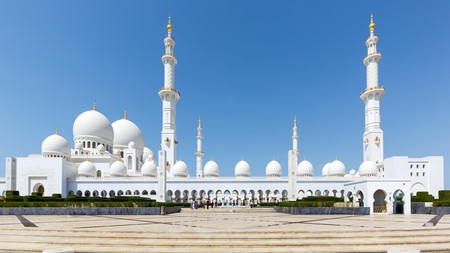 If the United Arab Emirates is on your travel itinerary this year, check out this handy list of the best things to see and do in its capital, the multi-faceted Abu Dhabi.

Abu Dhabi is full of immersive, educational and historical experiences. Whether you’re planning a stopover or a lengthier stay, there’s plenty to keep you occupied in the second most populous city in the emirates. Discover Abu Dhabi’s significant buildings, walk on the world’s largest hand-knotted carpet, spend the night in the desert or ride the world’s fastest rollercoaster – it’s all in the UAE’s cultural capital.

Visit the largest mosque in the UAE

Sheikh Zayed Grand Mosque is the UAE’s most beautiful mosque, and it’s here that you can stroll barefoot on the world’s longest hand-knotted carpet, beneath one of the largest crystal chandeliers on the planet. This elaborate religious site can hold up to 40,000 worshippers and was inspired by Persian, Mughal and Moorish architecture, taking its name from the country’s founding father, the late Sheikh Zayed bin Sultan Al Nahyan. The mosque was Sheikh Zayed’s idea and he rests within it. Apart from allowing visitors the opportunity to learn more about Islam (there are free tours hosted by local guides), the mosque boasts a unique lighting setup guided by the evolution of the moon during the lunar cycle.

Pro tip: Remember to dress modestly as this is an Islamic place of worship; abayas (loose cloaks) are available free of charge at the mosque. 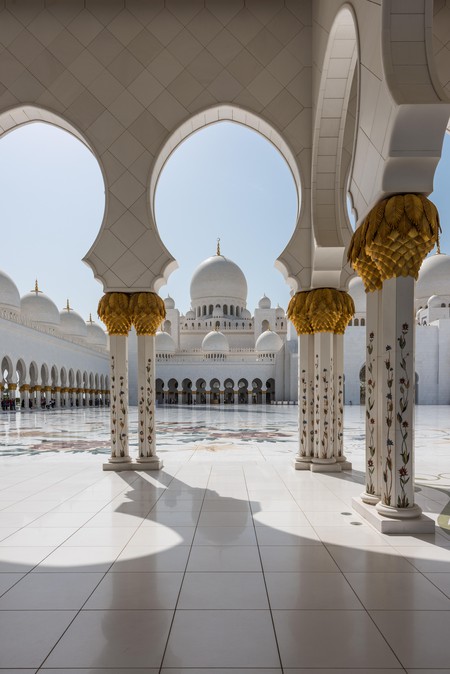 Spend a few hours at the Louvre

As you stroll around the dome-shaped Louvre Abu Dhabi museum that sits proudly within the Saadiyat Island cultural precinct, you’ll see why the ruling Al Nahyan family was of the belief that this billion-dollar establishment would help the capital transition into a globally renowned cultural hub.

French architect Jean Nouvel designed this, the first foreign outpost of the iconic Paris museum, and art enthusiasts will appreciate the huge gallery space that features works ranging from prehistoric artefacts to contemporary art. Leonardo da Vinci, Pablo Picasso and Ai Weiwei are just some of the artists represented here. Given that the government spent £589 million on art loans and special exhibitions from notable French museums including Musée du Louvre, Musée d’Orsay and Centre Pompidou, you can rest assured there’ll be plenty to enjoy as you wander the waterfront building at your leisure.

Pro tip: Sunset is the best time to enjoy this magnificent structure. If you want a unique view of the museum, hire a kayak and paddle around it. 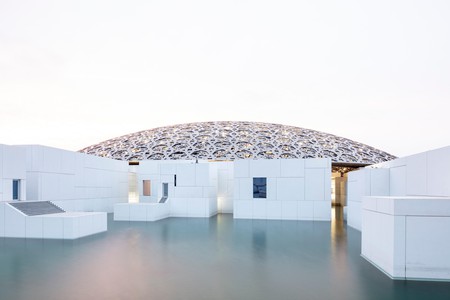 Learn about the falcon, the UAE’s national bird

Falconry has deep roots in Arabian history, dating back more than 2,000 years. The Peregrine falcon is a symbol of the UAE’s Bedouin culture and owning one today is a great source of pride. These hunting birds are so respected that they are able to get their own passports and can cost anywhere between Dh2,000 (£430) and Dh50,000 (£10,700) to purchase. While first and foremost a veterinary facility, the Abu Dhabi Falcon Hospital has developed into something of an educational institution since opening in 1999, providing interested visitors with tours that instil greater awareness and education about these valuable birds. You can tour the site with a guide, see the vets in action and even handle a bird yourself.

Pro tip: Make some extra time for the neighbouring Arabian Saluki Centre, a breeding and training centre for saluki dogs, where you’ll find out all there is to know about these desert canines. 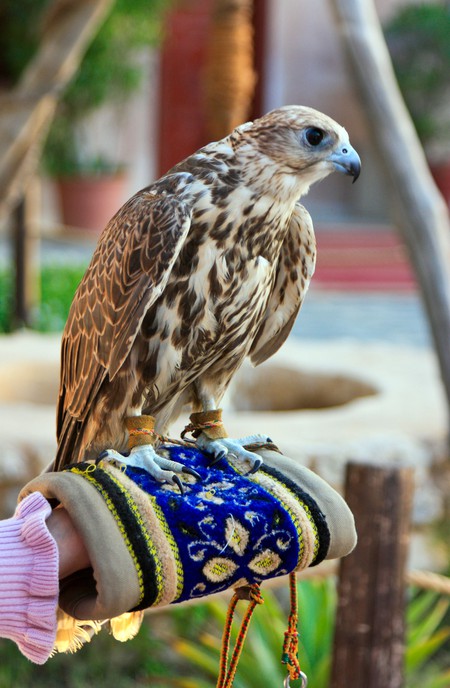 Take a spin in an Eco-Donut Boat

Eastern Mangroves Promenade is one of the city’s less well-known attractions. Located just off the main highway to Dubai on the north side of the capital, you’ll find a cluster of Eco-Donut Boats you can drive yourself. The small solar-powered circular boats can be hired for an hour or more with up to six people on board. Navigate your way around the wildlife-filled mangroves and enjoy a BYO lunch or dinner – it’s the perfect way to spend an afternoon or evening surrounded by nature.

Pro tip: Keep an eye out for foxes, turtles, flamingos and sea snakes, and allow plenty of time to find parking, as it can get very busy, particularly at the weekends (Fridays and Saturdays). 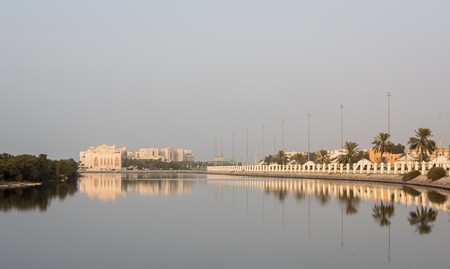 Go for gold at Emirates Palace

Emirates Palace is the official guest palace of the city’s government, and as such no expense has been spared, inside or out. This 394-room establishment is dripping with gold, and that means visitors or in-house guests can enjoy a 24-carat gold-flaked cappuccino, a gold-encrusted ice cream or a gold facial. The palace boasts beautiful Islamic architecture and elaborate decor and is also home to a marina and a private beach. Gold is such an important part of this property that it even boasts its own gold-leaf specialist, whose job it is to keep the precious metal sparkling.

Pro tip: While you’re at the palace, factor in a visit to the Founder’s Memorial, a permanent tribute to the country’s first president, Sheikh Zayed. Find the landmark by wandering out of the front gates of the palace and walking toward the Corniche – it’s on the corner. 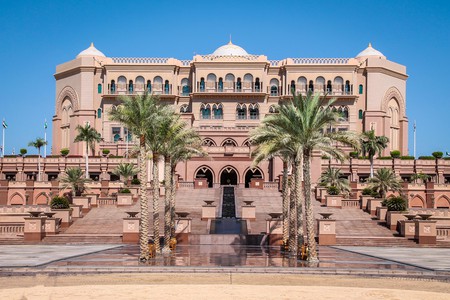 Spend a family day out at Yas Island

Once nothing but a sandy plateau, Yas Island has been developed into the capital’s family hub. Home to three theme parks, a world-class Formula One race track, a beach club and the biggest mall in the emirate, there’s plenty to keep you amused here. Ride the world’s fastest rollercoaster at Ferrari World, explore the six immersive worlds at Warner Bros World, cool off at Yas Waterworld and Yas Beach or get a taste of Grand Prix action at Yas Marina Circuit – all of this is just 20 kilometres (12 miles) from the centre of the city.

Pro tip: If you’re short of time and planning to visit two parks in one day, consider buying a one-day two parks ticket. You’ll get access to Yas Waterworld and either Ferrari World or Warner Bros World. 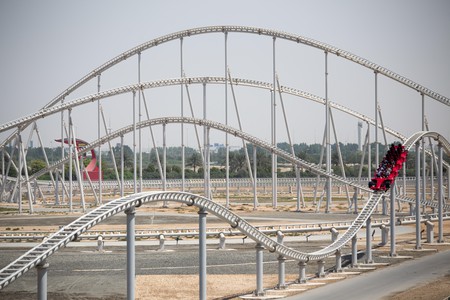 Emirates Park Zoo and Resort was the first private zoo of its kind in the UAE, and since opening in 2008 it has become a firm favourite for fun, family and adventure. Not only can animal lovers of all ages spend quality time among its 1,700 or so animals – it’s also possible to sit down to breakfast with the giraffes. Start your Arabian wildlife adventure by sharing a table with the resident reticulated and African giraffes, before joining a guide on a journey through the park.

Pro tip: Consider spending a special night at the resort in one of the chalets that offer views of the giraffe enclosure. 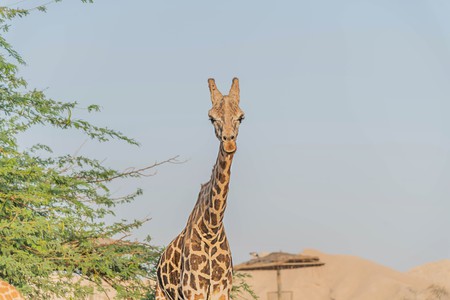 Go on a desert staycation

In a country surrounded by desert, you can’t visit Abu Dhabi without spending a night amid the dunes at a desert resort. Qasr Al Sarab by Antantara is “the world’s most instagrammed hotel” and by all accounts it is worth every minute of the two-hour drive it takes to get there. It’s positioned within the Rub Al Khali desert, the world’s largest contiguous sand mass. For those looking for a spot closer to the city, Jumeirah Al Wathba is just 40 minutes from the Central Business District.

Pro-tip: Prices are lowest during the winter months (November to May) and the climate is kinder, too, so bear that in mind when planning your stay. 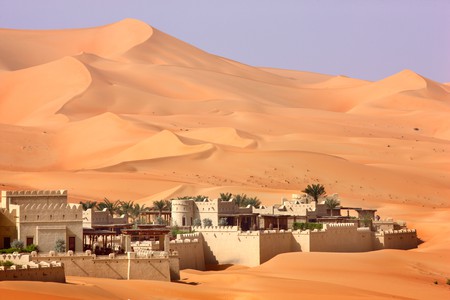 Take a tour of the Royal Palace

Qasr Al Watan, also known as the Palace of the Nation, is a tribute to the city’s heritage and culture, and the place where the UAE cabinet and Federal Supreme Council – the highest constitutional authority – meet. Time spent here allows a greater understanding of the governing traditions and values of the city. Visitors can learn about the formation of the UAE and its governance in the west wing, and the library has a vast selection of books and historical resources, while the east wing is home to a collection of artefacts and manuscripts that shine a light on the many contributions made by the Arab world. Aside from the historical significance, it is an eye-opening architectural feat: it is designed to echo traditional Arabian architecture, with high, white ceilings and intricate wall carvings. 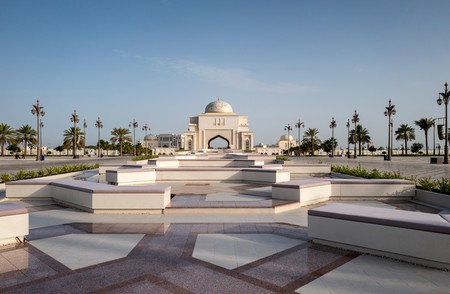 Shop at the Mina Fish Market

Fishing is a tradition deeply embedded in the UAE’s culture. With more than 500 different marine species in UAE waters, the demand for seafood has risen in the past 40 years owing to an increased population, and you can get a first-hand look by visiting the Mina Fish Market at the port end of the city’s Corniche. You’ll be wowed by the rows of colourful fish and the number of stallholders bargaining to get the best prices. The market is at its busiest early in the morning when wholesalers are snapping up their orders for the day.

Pro tip: Do as the locals do and take your chosen catch to a gutter and filleter before seeking out a cook at one of the small canteens to grill it for you. 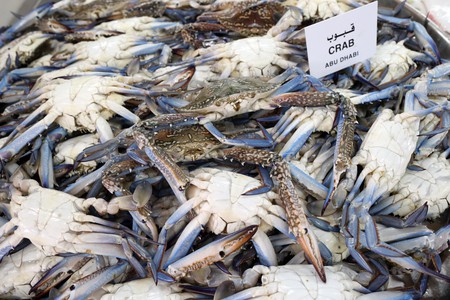