How To Spend 48 Hours in Abu Dhabi 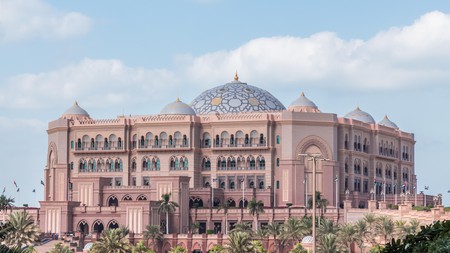 From state-of-the-art architecture to its awe-inspiring skyline, Abu Dhabi has cemented itself as the UAE’s cultural heart. With newly opened art institutes such as the Louvre and world-class attractions like Ferrari World, this city truly caters to every type of traveller.

Aside from its lively cultural aspect, Abu Dhabi also enjoys a sterling reputation as one of the world’s most luxurious cities. Lavish five-star hotels and beach resorts – the kind so plush you might never want to leave – dot the cityscape.

Before you set off for your mini-break, it might be worth checking out Abu Dhabi’s many hotel options to make the most of your short stay. Find a place in Al Bateen, the city’s oldest neighbourhood, to be in the bustling city centre; the Abu Dhabi EDITION and Royal M Hotel & Resort Abu Dhabi are excellent options.

Morning: Run with the Red Stallions at Ferrari World

With an action-packed day ahead, fuel up at breakfast with freshly squeezed juice and a selection of fruit poolside at the EDITION in Abu Dhabi’s vibrant Al Bateen neighbourhood. While you’re here, squeeze in a quick morning sauna at the hotel spa to shake off any travel cobwebs.

Prepped and ready for the day ahead, take a 30-minute taxi ride to Yas Island, home of the Yas Marina Circuit. The name may ring a bell, as the track hosts Formula One’s season-ending Abu Dhabi Grand Prix. Even if your trip doesn’t fall on the race weekend, the island is still a must-see.

Adjacent to the track sits Ferrari World Abu Dhabi – a sweeping masterpiece of modern architecture. Live out your F1 fantasies in one of the simulators dotted around the park, or try your hand at go-kart racing. All adrenaline junkies need to ride the park’s Formula Rossa. Famously known as the world’s fastest rollercoaster, it’ll certainly get your heart pumping. 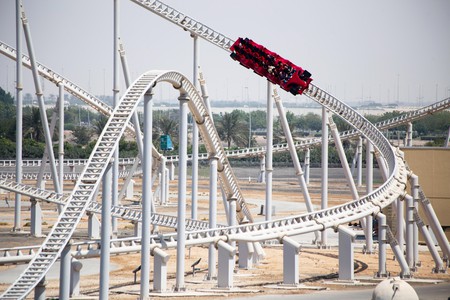 After your red-hot Ferrari World adventure, cool down at the nearby Yas Waterworld. This waterpark sports over 40 rides – with ‘thrill level’ categories ranging from Young Fun (low) to Moving & Grooving (medium) through to Exciting Adventure (high) and Adrenaline Rush (extreme). There’s something for the whole family.

Jebel Drop (Mountain Drop) is among the steepest water rides in the park and has the best scenic vantage point. The adrenaline rush of seeing the Grand Prix circuit fade away in the distance makes it one of the most popular rides in the waterpark. Even scarier is the Liwa Loop, where the floor disappears from under your feet for an almost vertical drop, delivering a true heart-in-mouth moment.

After an afternoon of fun in the sun, round off your trip to Yas Island by walking over to the city’s biggest shopping complex, Yas Mall. You won’t struggle to find any of your favourite big-brand stores, and there are plenty of food joints for a late lunch or afternoon snack. The Yas Shake Shack may not have infamously long queues around the block like the chain’s original New York restaurant, but the burgers and frozen custard certainly live up to the hype. Black Tap Craft Burgers & Shakes serves the most obscenely decadent milkshakes around – try its Cake Shake (rainbow cake batter) or Sour Power Shake (black cherry). 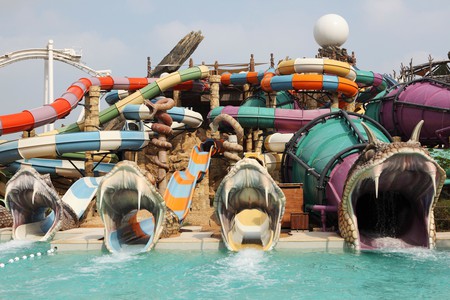 Evening: Check out Al Maryah Island and have dinner at Butcher & Still

For the best of Abu Dhabi’s nightlife, catch a 30-minute taxi ride northeast to Al Maryah Island, otherwise known as the ‘Manhattan of the Middle East’.

In the past couple of years, the neighbourhood has rapidly developed, quickly becoming Abu Dhabi’s most vibrant late-night hotspot. Some of the city’s most exclusive hotels, restaurants, cafés and shops are all positioned here, including the Four Seasons Hotel, Rosewood Abu Dhabi and The Galleria.

For dinner, try the highly recommended Butcher & Still at the Four Seasons Hotel. Inspired by Prohibition-era Chicago, the restaurant has some of the best steaks in town. The glamorous 1920s-inspired interior will take you back to another time, as you tuck into a perfectly cooked fillet with peppercorn sauce. Happy hour runs every day from 4pm to 7pm. 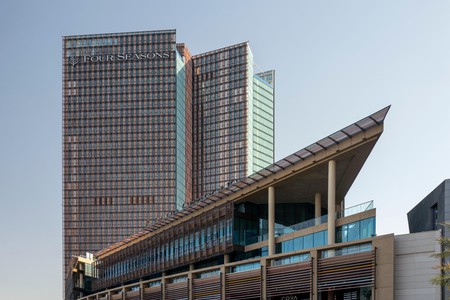 To wrap up the night, stroll for 10 minutes to a number of nearby cocktail bars. Peruvian restaurant COYA is a firm favourite with residents for its pisco sours, and Japanese restaurant Zuma serves top-notch sake-infused cocktails. For something more relaxed and casual, the Mexican-themed Loca Restaurant & Bar offers classic margaritas and has a buzzy terrace with superb waterway-facing views.

Morning: Have breakfast at tashas and visit the Sheikh Zayed Grand Mosque

Head over to tashas in Al Bateen. This breakfast spot serves up Mexican bowls and a range of American brunch classics. Try its famous Schnitzel Sarmie sandwich, which is best eaten on the terrace with views of Al Bateen Wharf.

After replenishing your strength, catch a 15-minute taxi ride east to find one of the world’s largest mosques – the stunning Sheikh Zayed Grand Mosque. With 82 domes and a capacity for 40,000 worshippers, it’s an architectural marvel. Named after the UAE’s founding father, the mosque, with its towering minarets, is a majestic reminder of Islam’s central role within the country’s rich history and heritage.

Abu Dhabi is famous for record-breaking attractions, and the Sheikh Zayed Grand Mosque is no exception. It covers an area of 12 hectares (30 acres) and is also home to the world’s largest handmade carpet. Please note that female visitors are asked to cover up with traditional abayas (a loose robe-like dress), in keeping with religious rules. 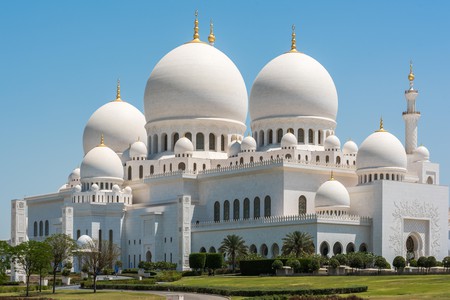 One of the largest mosques in the world, the Sheikh Zayed Grand Mosque covers an area of 12 hectares (30 acres) | © Llewellyn / Alamy Stock Photo

In 1968, the very plot where the Abu Dhabi EDITION now stands was once home to the cult seafood restaurant known as Bu Tafish. Legend has it that the UAE’s founding father, Sheikh Zayed bin Sultan Al Nahyan, visited the original site and encouraged the young owner, Radwan Al Tamimi, to expand his business.

Though the original restaurant closed a number of years ago, a new branch recently opened in Al Bateen. Although the decor may be slightly kitsch, the seafood is exceptional. Order the butterfly-grilled jumbo prawns with lemon and garlic sauce, or try its grilled hamour with spices.

Once you’ve re-fuelled, head to Saadiyat Island (roughly 20 minutes away by taxi) for a dose of culture at the Louvre Abu Dhabi. In 2017, the ground-breaking art museum opened its doors to the public, and it has since established itself as a pre-eminent example of such on the world stage.

Architect Jean Nouvel designed the 180-metre (591-foot) metalwork dome to house an impressive collection of artworks, including paintings by Leonardo da Vinci and Henri Matisse. Be sure to look out for the unmissable neolithic Monumental Statue with Two Heads, which is one of the oldest discoveries known to humanity, dating from 6500 BC. 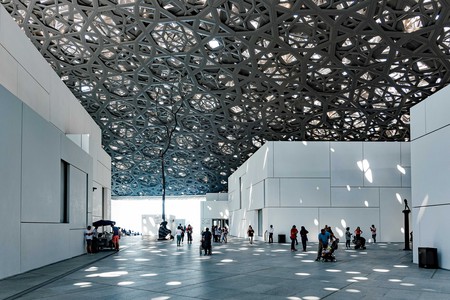 Evening: Have dinner at the Emirates Palace

Kick start the evening at the Abu Dhabi EDITION, where you can rest your feet after a long day and order a drink in its atmospheric Oak Room. Sophisticated and elegant, the Oak Room is known to be a favourite among celebrities and F1 drivers competing in the latest Abu Dhabi Grand Prix.

After a drink or two, take a seven-minute taxi ride to the Emirates Palace for an early dinner. Once here, you’ll find a few fine-dining options, including the Mezlai Emirati Restaurant and Lebanese-inspired cuisine at Mawal. The most popular, however, is Hakkasan, which has quickly become a favourite with residents for its menu of traditional Cantonese cuisine with a distinctively modern twist. Sample its peking duck, which is undeniably worth the trip alone. 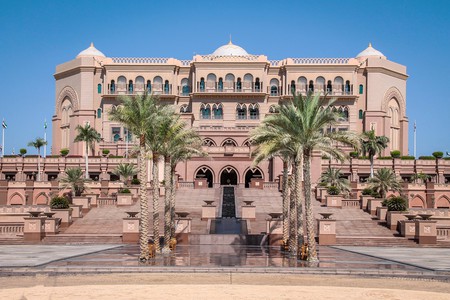 Night: Take in a farewell 360-degree view of Abu Dhabi

Take a short walk from the Emirates Palace to the Jumeirah at Etihad Towers, where you can end the night sipping on a cocktail or two on the 63rd floor. Soak up Abu Dhabi’s stunning 360-degree views, and look out onto the waters of the Persian Gulf. 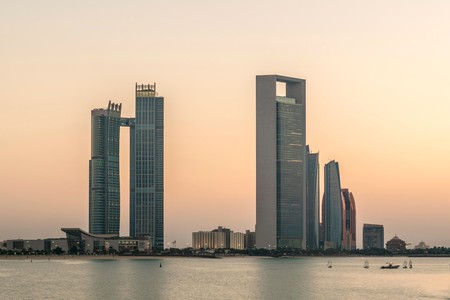