The Most Historic Forts and Castles in Oman 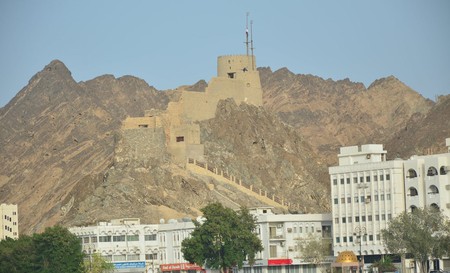 Muttrah Fort watches over the sleepy town below | © AllSmiles-Seattle / Flickr

On the coast, atop mountains, within deserts: no matter where you go in Oman, you’re bound to run into one of the country’s many forts and castles. While a few date to the time of the Portuguese, others have more local but equally fascinating origins. Each has its own story to tell, and is a piece of Oman waiting to be discovered – here’s our pick of the best. 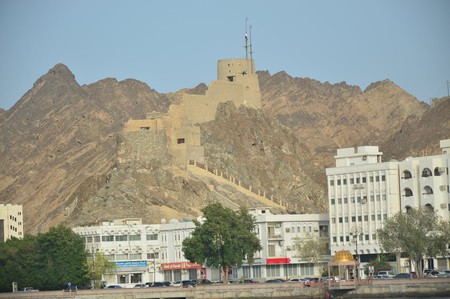 Muttrah Fort watches over the sleepy town below | © AllSmiles-Seattle / Flickr

Guarding the harbour of Muttrah and the road to Old Muscat, this fort sits majestically atop a mountain, its serpentine wall and monumental tower crowning the city’s skyline. Also known as ‘Koot Muttrah’, the fort is one of Oman’s oldest, dating back to the 16th century, and remains an icon of Muttrah and one of the most visited sites in the country due to its elevated, fairy tale-like setting.

To truly understand the importance of the fort, you need to go back into time, to the early 16th century specifically. Like the great strongholds of Bahrain, Diu, Goa, and Mombasa, Muttrah Fort is directly linked to the first Portuguese Empire, which was born during the Age of Discovery. The expertise of Portugal’s seafarers allowed them to round the Cape of Good Hope and find another way to access the lucrative spice trade, which until then had been monopolised in Europe by the Venetians (who worked exclusively with the Sultans of Egypt).

The Portuguese were quickly able to establish themselves throughout the coastal areas of the Arabian Peninsula, including Oman, with parts of the Sultanate occupied by them for 145 years. It was in this era that Muttrah Fort was born.

Historians either credit the fort as being initially built by them, or say they added two towers and a curtain wall to a pre-existing Omani structure when they arrived in 1507. Unable to control inland Oman, Muttrah Fort kept a close watch for any approach from the mountains or along the route to Old Muscat.

Centuries later, now under Omani control, the fort’s wall was doubled. It continued its function as a part of a powerful coastal defense system protecting the capital city. Nowadays it is open to the public and visitors can see firsthand just how important the fortification was its strategic location offers it a broad view of Muttrah, the coast, and surrounding mountains. Not only is it picture-perfect, but the story behind its connection linking east and west makes it even more unique, fascinating and worth every second it takes to reach the top.

The Fort of Sohar dominates the southern part of Oman’s third largest city, located 200 kilometers (124 miles) north of Muscat and less than two hours’ drive from the UAE border.

Its historical importance is connected to the city of Sohar itself, which in the past served as major port of call for millennia, serving as a transit point for goods from China, linking the major trading points of the Red Sea, India and the Far East.

Archaeological excavations date the fort back to the 14th century. Later, following the arrival of the Portuguese, Sohar’s Iberian conquerors inherited a square structured fort with a parapet and bastion in each corner. According to historic records, the fort had freshwater wells, accommodated up to 300 soldiers, and was enclosed by a wall. In 1621, sources state that the fort was rebuilt by a Portuguese captain named Joao de Souza Pinel.

Just as the fort would preside over the most important era of Portuguese domination in Oman, it would witness the close of that chapter in history. In 1643, it was besieged by Imam Nasir bin Murshid, who is later credited with expelling the Portuguese from Oman.

But that wasn’t the last time the fort would play a major role in Omani history. A great deal of battles, sieges, and intrigue would play in and around the fort, making it one of the most important monuments to the Sultanate’s history. Today, the fort remains closed for renovation, but once it reopens, visitors will once again have a chance to explore one of the most important historic sites in the region. 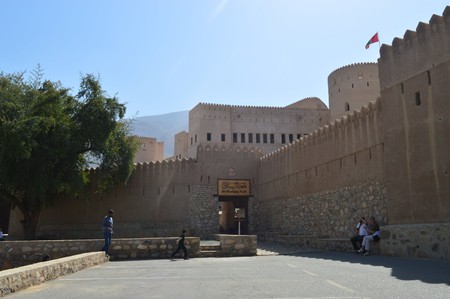 Rustaq is less than two hours from Muscat, with its fort one of many historic monuments not to be missed | © AllSmiles-Seattle / Flickr

Ar Rustaq is one of the most historic places in Oman, with legends dating the city’s origins back to the pre-Islamic Sassanid era, when the Shahanshahs of the Persian Empire ruled and exercised control over most of the Middle East. Its abundant date trees, scenic wadis, and wealth of historic sites has earned it a popular place in the hearts of Omanis and visitors alike. A visit to the fort, when combined with the surrounding area, will quickly show you why.

The fort dates back to the era of the Yarubi Imams, with Imam Nasir bin Murshid (1634-1649) credited with constructing it shortly after designating Rustaq the new seat of his dynasty. He could not have chosen a better place: the city’s location halfway between Oman’s two traditional spheres of power – the interior and the northern coast – gave the Imams greater authority over both land and sea. Even after the fall of Imam Murshid’s dynasty 125 years later, Rustaq would continue to serve as Oman’s capital during the early Al Bu Said era.

Besides its incredible history, the fort of Ar Rustaq is further distinguished by its four towers, exquisite architectural features, use of carved wood and historic mosque. More surprises lurk beneath the fort, where an abundant falaj has flowed for centuries. On the highest courtyard, travellers can visit the burial site of Imam Nasir himself and one of his successors, Imam Saif bin Sultan (1692-1711), before heading to explore the rest of Ar Rustaq’s treasures 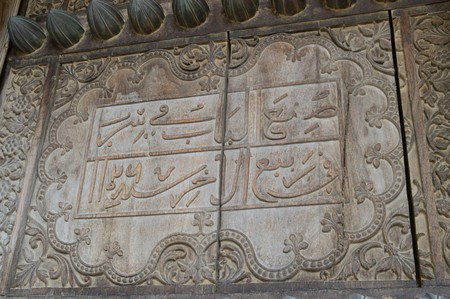 The gate of the Al Hazm Castle was carved in Surat, India, 300 years ago | © AllSmiles-Seattle / Flickr

The Al Hazm Castle is a massive stronghold located in a wide plain just 15 minutes away from Ar Rustaq. With canon galleries, historic gates, and dungeons, Al Hazm remains one of the most fascinating strongholds to visit anywhere in Oman. Thanks to a highly interactive approach with audio guides on hand, visitors are bound to have much easier time enjoying all the castle has to offer.

Imam Sultan bin Saif is credited with ordering its construction in 1711, making it more than 300 years old today. After the imposing features of its outer shell, the next thing that will immediately impress visitors is bound to be its carved wooden gate, which was built in Surat and according to legend, took 13 horses to bring to Al Hazm. From your first steps into the fort, the experience only gets better, with a falaj, old inscriptions carved in the walls, a secret tunnel, and dungeons waiting to be explored. The Imam Sultan bin Saif as well as his successor and son, Saif bin Sultan the second, are also buried within the castle.

The castle has two towers located in its northwest and southeast corners respectively, each bearing two levels with seven firing ports, offering a total of 28 canons complete mastery over the plain. The towers now house a historic canon gallery, with artillery from the Iberian Peninsula, the UK, Sweden, Germany, the Netherlands, Oman and India on display. Some date back to the 15th-16th century, while the rarest canon featured is a Portuguese-Indian beech loader discovered in Nizwa.

The Forts of Jalali and Mirani

Widely recognised as the icons of Muscat, the forts of Jilali and Mirani are situated in Old Muscat and despite not being open to the public, continue to fascinate visitors from around the world. Despite being originally built by the Portuguese as part of Muscat’s coastal defensive system, their usage has continued to evolve with time. They have served as houses, jails, royal residences, and garrisons.

Jalali and Mirani are nearly always mentioned together, given their close proximity to one another and rhyming names. No one knows for sure who christened them: one theory is that Jalali refers to the Arabic word ‘Jalal‘ meaning elevated, while Mirani is a corruption of the Portuguese word ‘mirante‘. Local legend, on the other hand, credits their names to Miran Khan and Jalal Khan, two soldiers credited with capturing them during the last battle between the Portuguese and Omanis for Muscat.

What is known for certain is that they were built by the Portuguese during the 16th century. Enrico D’ Errico, an expert on the forts, states that construction of Mirani began in 1507, with Jalali built 20 years later. Years later, in 1586, records show that a Milanese architect named Giovanni Battista Cairate left for Muscat with a commission to strengthen and enhance both forts. 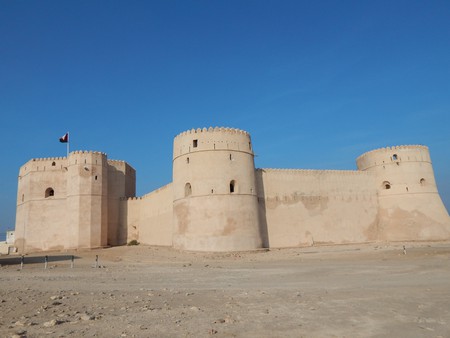 Located between the major cities of Sohar and Muscat, Barka Castle formed part of the impressive string of forts along the Batinah Coast, guarding mercantile vessels and protecting the route towards Rustaq. Barka itself is renowned for its calm shore, numerous date palms, and traditional Omani bullfighting. The Barka Castle is a great way to begin an excursion to this highly interesting and culturally-rich part of Oman just 80 kilometers (50 miles) from Muscat.

The fort dates back to the early Yarubi era and, like the sleepy town of Barka, has been a witness to some of Oman’s most decisive moments in history. Along the walls of the fort, exhibits detail the most important of these events: the 1747 massacre that took place within the fort. At the time, Omani leader Ahmed bin Said had invited a large number of Persian soldiers and dignitaries, who had been occupying Oman for years, to a banquet at the fort. According to Omani sources, while the banquet was underway, drums were beaten from the top of the fort and a voice shouted, “Anyone who has a grudge against the Persians may now take his revenge.” A massacre ensued, marking the end of Persia’s 18th century occupation of Oman initiated by the Afsharid ruler Nader Shah. 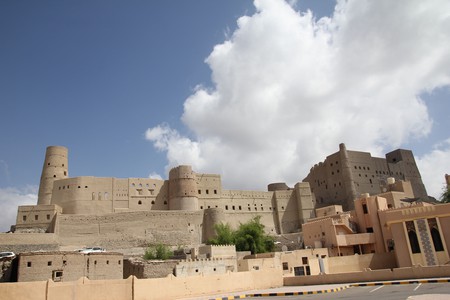 The Bahla Fort is the largest in the Sultanate and was once the seat of the Nabhani dynasty that ruled Oman for over 500 years. Styling themselves as the kings of Oman, the most famous monument of their era is the grand fortress they left behind, a huge complex of towers, bastions, and arches that celebrate Oman’s mastery of defensive architecture. Many researchers date the oldest sections of the fort to the 13th century, making it one of the most impressive examples of medieval Islamic architecture.