The Best Cycling Routes in Oman

Tour of Oman in the City circa 13 |© Prasad Pillai

If you are one for adventure then Oman needs to be on your bucket cycling list. Picturesque Oman with its diverse landscapes is the perfect sport-enthusiast location for a range of activities, like cycling, with its long coastlines, ancient forts, rugged mountains, and empty deserts.

The Tour of Oman is the Middle Eastern version of the Tour de France. It started gaining momentum when in 2013 the winner, Chris Froome, went on to win the Tour De France. The Tour of Oman usually consists of six stages and lasts six days. Starting in Muscat, the tour is a mixture of coastal, city, and mountain landscape routes, and by the fifth day, making it up to the Jabal Akhdar, the tour of Oman is a pretty intense and long journey of cycling, but one can find details of all the routes on their website. 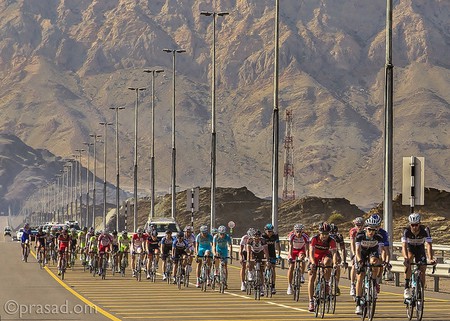 Veterans of cycling argue that Oman offers the best terrain and conditions for cycling; some cyclists even come to Oman to prepare for world wide cycling events. For one, there was the Austrian duo of Peter Kumhofer and Brigitte Nickl, who were the first to set off on a cycling adventure in Oman. They started their journey in Muscat, and went from Wadi Hatat to Salalah via Sur’s coastal road; the trip covered 1200 kilometers and took 12 days. This route marks one of the coastal cycling routes that people can take, however, if you’re not open for a 12-day cycling adventure we have you covered.

When it comes to cycling routes, the world is your oyster. Oman has different landscapes ideal for cyclists, and the locals even in the most remote areas are down to earth and will probably ask if you need help. It’s pretty safe anywhere you decide to venture. If you are not up for a big cycling adventure, around Muscat are bike hubs where people can rent bikes and take them around the city; an area we recommend is the Muttrah Corniche area, where the famed Souk Muttrah is. 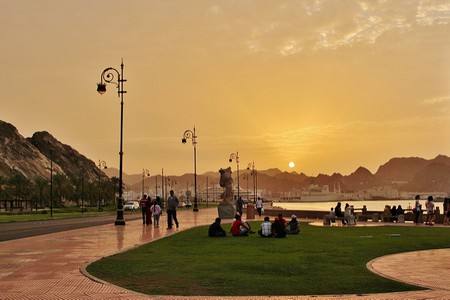 However, if you are looking for something more daring, look no further. One of the most popular cycling routes usually starts on the Muscat coastal road all the way up to Sur. Then there is a route from Nizwa-Wadi Bani Awf to Rustaq, or the mountain ride up Jabal Shams. If you are planning to camp anywhere on your route, it’s very safe and the locals will not even look twice. The road is marked, paved well, and is a pretty cool coastal ride for any biker wanting to do an Arabian cycling venture. 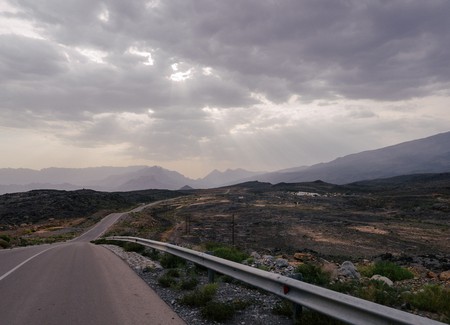 The first bike route from Muscat to Sur is on the paved coastal road, so you will be passing by a number of sites worth checking out, such as the Bimmah sinkhole, one of the most beautiful sinkholes in the world, and where visitors can take a swim for free. There is also the ancient city of Qalhat, where the lone tomb of Bibi Maryam stands, a UNESCO heritage site.

The recommended Nizwa-Wadi Bani Awf-Rustaq ride is a bit challenging, as the roads are rough and there are some steep parts to deal with, but the views are worth it. Nizwa is an idle historic and cultural state with a great fort and market for visitors that is open every day. Not all the roads are perfect, but the main city center is ideal, with widely paved routes that are easy for cyclists to get around. The Wadi Bani Awf route is pretty hectic so we do not recommend it as a cycling route, although it is beautiful, and you could go with a 4×4. Getting from Nizwa to Rustaq is easy, as the road is paved and there are road signs to help. Rustaq was one of Oman’s old capital cities, and inside of it is the Hazem Fort, built around 1711 A.D., as well as the Rustaq Fort, along with hot springs and wadis. 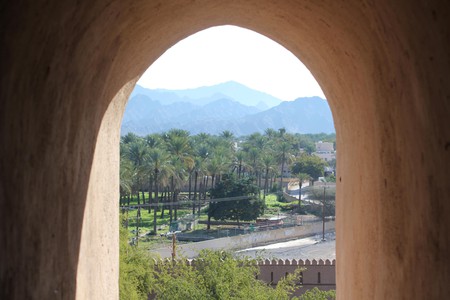 Our final route is the Jabal Shams; getting to there is the easiest from Nizwa (40 kilometers away), as there are clear road signs to help nagivate people as well as a number of camps up on Jabal Shams and around Nizwa. Also remember Omani people are pretty hospitable, so it will be quite hard to get lost. Jabal Shams is also a great picturesque location to cycle to. Once you get there remember, Jabal means mountain in English, so it’s a pretty steep ride at some points—make sure your fitness levels are top shape before you attempt this one. Once you do get up there, the canyon views are worth it and make for some epic Instagram-worthy shots. 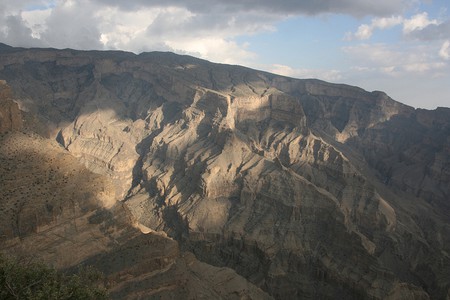 On top of Jebel Shams | © Marco Zanferrari / Flickr
Give us feedback