A Historical Tour of Oman's Forts 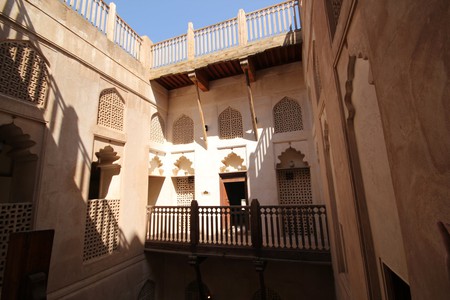 High circular towers, unique arches, great walls and huge buildings, this is what visitors see of Oman’s forts and castles. Nevertheless, the truth is that every brick in these buildings has lots of hidden engineering gems and architectural beauty that reflects Oman’s great army minds. Here is a mind-blowing tour of the history and heritage of the unique forts and castles around Oman.

Nizwa Fort was established in the 1650s by Imam Sultan Bin Saif Al Ya’rubi, and took around 12 years to be built because it lies over an underground stream. It is one of the most visited national attractions in Oman for the historical significance that it represents, being the main administrative seat of authority for Nizwa’s Wallis and Imams (rulers) during peace and war times. The foundations of the fort go deep into 30 meters (98 feet) under the ground. 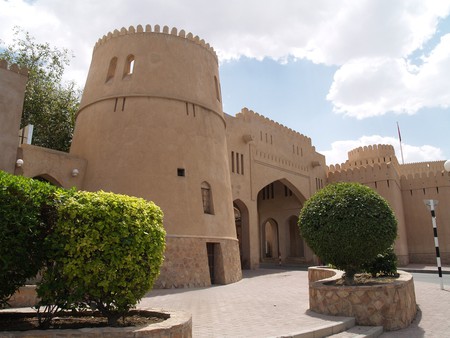 Its main part is a 30 meter (98 feet) tall tower, which has inches-thick walls to endure the barrages of mortar fire. There are two cannons at the fort’s entrance, and four on its rooftop that used to protect the city in war times. Inside the fort, there is a maze of rooms, narrow staircases and corridors, high-ceiling halls, doorways and terraces. All of which used to protect Omani fighters during wars and prevent their enemies from barging in. Now the fort is surrounded by Nizwa’s traditional souq, and holds a museum which tourists can visit when they going around the fort.

The village of Bahla is an ancient oasis in Al Dakhliya region in the northern center of Oman. For the fertility of its sands and its unique pottery, it was declared a UNESCO World Heritage Site in 1987. Bahla Fort is located at the foot of the highlands of Al Jabal Al Akhdar (The Green Mountain), and was built in the 13th and the 14th centuries. Like Nizwa Fort, it consists of circular towers, and wooden doors, yet it has a big backyard. 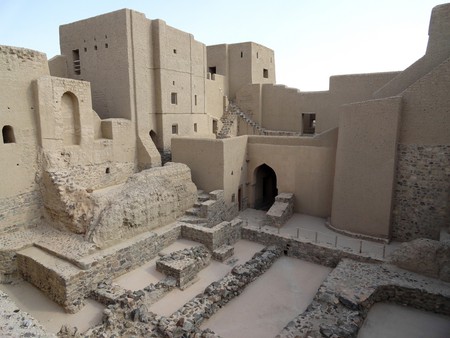 Jabreen Castle (also known as Jibreen or Jibrin Castle) was built in the late 17th-century in the city of Bahla in Al Dakhliya Governorate, by Imam Bel’arab bin Sultan Al Yarubi, whose father built Nizwa Fort. What distinguishes Jabreen Castle than other forts, is that it was built during peace times, so it was not founded as a fortification palace, but as a center of knowledge. 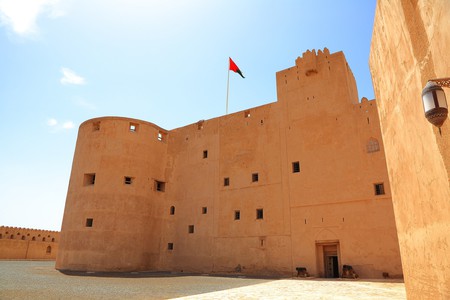 As Imam Al Yarubi was interested in science and art, he built a palace that presents decorated wooden balconies and windows. It also features arches with engraved Arabic calligraphy, and spectacular artwork on its ceiling. The palace has two towers, several dining rooms and reception areas, a court room and a library, and classrooms.

Bayt ar Ridaydah Castle is a small fort that is around 24 km (15 miles) away from the city of Nizwa. It was built in the 17th-century as a defense castle, but is distinguished with its unique Omani architecture. The interior of the fort features architectural beauty through its painted ceiling, the breathtaking art on its walls and the uniquely-complicated plasterwork. 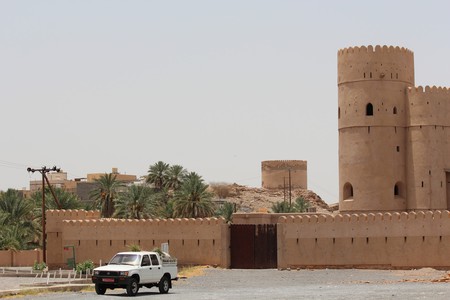 Nakhal Fort, also known as Husn Al Heem (Al Heem Castle), was named after the state of Nakhal in Al Batinah Region in northern Oman. The history of the fort extends before the Islamic period, and it went under several renovations until it was rebuilt in the 17th-century. The fort is built over a rocky area at the foot of Jebel Nakhal (Nakhal Mountain), which is a part of Al Hajar Mountain area. The fort hosts a weekly goat auction market and inside, there is a museum with displays of historic guns. 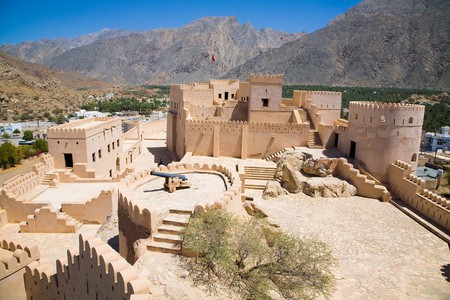 Al Jalali and Al Mirani Forts were both built in the 16th-century and are located on the harbor of the city of Old Muscat in northern Oman. Both forts were built by the Portuguese to protect the harbor. Al Jalali is located on a rocky outcrop in the east side of the harbor, while Al Mirani is on a rocky outcrop on the west side. The existence of the two forts along with the surrounding mountains made Muscat fortified against any attack from the sea. Now, Al Jalali Fort hosts several museums that exhibits weapons, maps, rugs, cannons, old matchlocks and muskets as well as several ancient Omani artifacts. 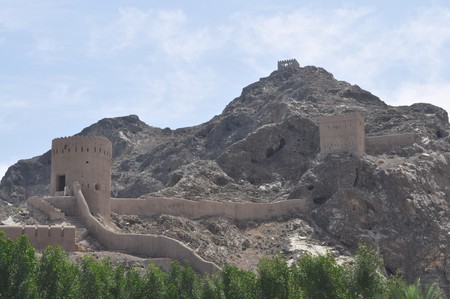 Taqah Castle was built in the 19th-century and named after the old city of Taqah, which is 33 km (20.5 miles) away from Salalah in the Dhofar Governorate. Unlike other castles and forts, the Taqah Castle was built as a residential house for a tribal leader called “Sheikh Ali bin Taman Al Ma’shani”, who was the grandfather of the mother of the current ruler of Oman, the Sultan Qaboos. The government took control over the castle in the early 20th-century. It was later used as the house of Taqa’s Wali (governor) until 1970. Now the castle has several museums that exhibit weapons and cooking tools. 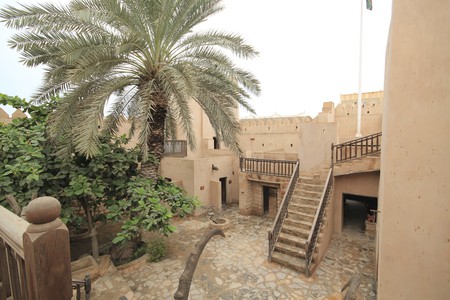 Al Hazm Castle was built at the beginning of the 18th-century in Al Rustaq city in Al Batinah Region northern Oman. It was established by Al Yarubi tribe, which ruled Oman for a long time and are known for fighting the Portuguese out of Oman. They also built Nizwa Fort and Jabreen Castle. Nevertheless, Al Hazm Castle has a more technologically-advanced structure, as it was built to withstand cannon attacks and so its ceilings weren’t built with wood unlike the others. Although the castle was built for defense purposes, it still features some architectural beauty as it was also a residence for Al Yarubi Imams. In the entrance, there is the intricate Indian-wood gate as well as the unique engravings inside. Al Hazm Castle is declared as one of the unique Omani castles in the UNESCO World Heritage sites. 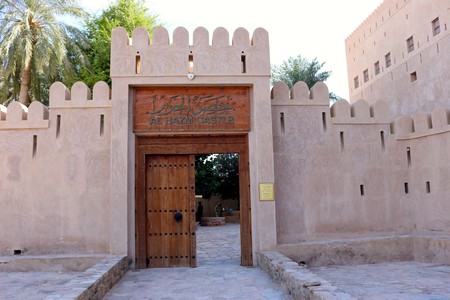 Al Rustaq Fort is another famous Omani fort that was built in Al Rustaq in Al Batinah Region and is on the list of the UNESCO World Heritage sites. It was built in the 13th-century in a strategic position between the coast and several mountains. It is also known to be one of the biggest forts in Oman and has four towers, a mosque, a prison and its own water-irrigation system. 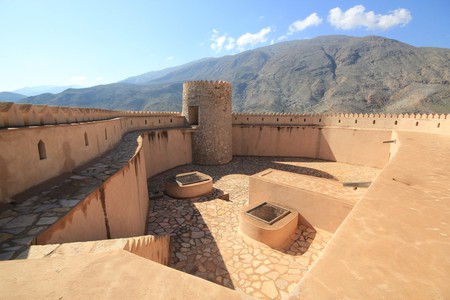