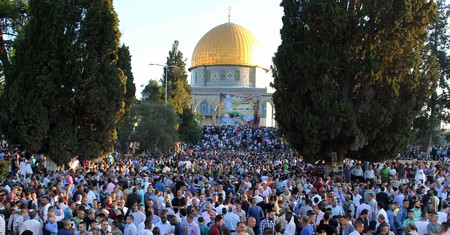 Palestinian Muslims after performing the morning Eid al-Fitr prayer near the Dome of Rock at the Al-Aqsa Mosque compound, Islam's third most holy site, in the Old City of Jerusalem | © ZUMA Press, Inc. / Alamy Stock Photo

Discover how Christians, Jews and Muslims living in Jerusalem – along with millions of pilgrims who flock there – celebrate their most sacred religious festivals in the Holy City.

Jerusalem is one of the oldest and most venerated cities for the world’s three Abrahamic faiths – Islam, Christianity and Judaism.

For more than three millennia, the Holy City has been the spiritual centre of the Jewish people, who believe that Mount Moriah, which the Jews now refer to as the Temple Mount, is where the biblical patriarch Abraham almost sacrificed his son Isaac.

For Christians, it is in Jerusalem that Jesus Christ held the Last Supper, was crucified and then later resurrected.

Centuries later, Islam would also see the city play a central role in its teachings, following the passing of the Prophet Muhammad, who is believed to have ascended to heaven from the Haram esh-Sharif, or the Noble Sanctuary.

As the three monotheistic faiths evolved and developed over the centuries, a number of unique traditions and holidays came to be associated with various sites set across the city.

The two best periods during which to experience the main religious festivals of the Christian year are Christmas, and the Holy Week and Easter.

In anticipation of Christmas Day, the festival celebrating the birth of Jesus Christ, Christians in Jerusalem head over to Dormition Abbey, a historic Benedictine church located on Mount Zion, where it is believed that the Virgin Mary died and where Jesus held the Last Supper. The abbey, which is open to people of all faiths, holds Christmas carols and a traditional Midnight Mass on Christmas Eve following which visitors can join the monks in a communal walk to Bethlehem. It is advisable to carry your passport to get past the security checkpoints.

Alternatively, visitors can take a stroll through the Christian and Armenian quarters of the Old City at night and enter one of the many historic churches, including the Church of the Holy Sepulchre, for special concerts and services. Here, you can light candles and sing along during carols. 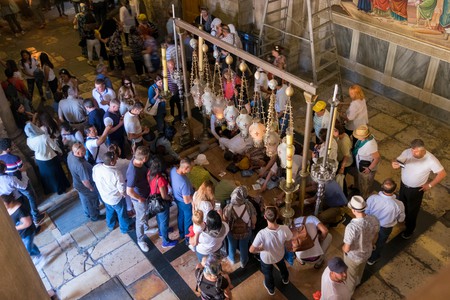 The nearby landmark YMCA on King David Street – a meeting point for Jerusalemites of all faiths during the holidays – is beautifully bedecked for the occasion with elaborate lighting and a giant tree. For some last-minute shopping, visit the quaint Christmas market nearby, which sells toys, cookies and other holiday treats that you won’t find anywhere else in the Holy Land. It should be noted that Christian-owned businesses in East Jerusalem and the Old City remain closed on Christmas Day. 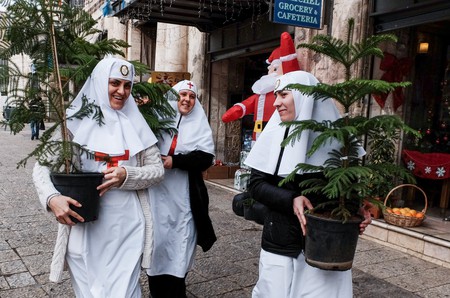 The period of the Holy Week and Easter in Jerusalem is a great draw for Christian pilgrims in the city as well as for throngs of international visitors. One of the most popular events is the re-enactment of Jesus’ entry into Jerusalem on Palm Sunday, right before Easter. Thousands gather at the Franciscan Church of Bethphage located on the Mount of Olives at about 2:30pm before beginning their descent while singing songs and carrying palm fronds.

On Good Friday, the Old City turns into an unforgettable sight: thousands of pilgrims follow in Jesus’ footsteps along the Via Dolorosa (beginning at Station I at 11:30am) in order to re-create his journey up to Golgotha inside the Church of the Holy Sepulchre to his crucifixion. Be prepared to follow the crowd on this occasion, many of whom chant and carry wooden crosses and flags from their respective countries. 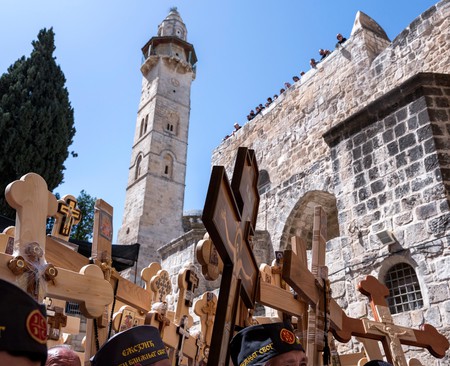 Witness the Holy Fire ceremony on the Saturday preceding Orthodox Easter at the Church of the Holy Sepulchre. After the procession around the church, all the lights are extinguished. The Greek Patriarch then emerges from a structure built over Christ’s tomb holding two large candles which are said to be lit by a miraculous flame. He then proceeds to light the candles of the entire congregation until the church is fully lit. As the church receives thousands of worshippers during this day, it is advisable to show up at around 8am, with the ritual coming to a close at 4pm. 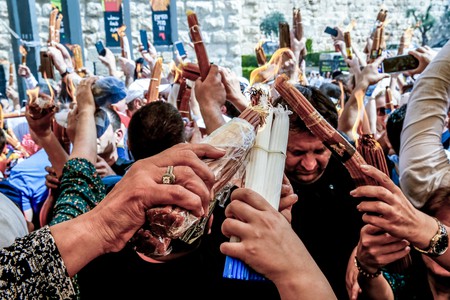 Jerusalem – known in Arabic as Al-Quds – is considered the third holiest city in Islam after Mecca and Medina. The Old City houses the Al-Aqsa Mosque and the Dome of the Rock, one of the oldest surviving examples of Islamic architecture and its iconic gold-plated roof is visible from miles away. The Haram esh-Sharif has become a meeting point for Muslims across the city and a place where children go to play or relax under the shade of the trees spread throughout the esplanade.

During the holy month of Ramadan – which takes place at different times of the year depending on the Islamic lunar calendar – most shops and venues in East Jerusalem and the Muslim Quarter in the Old City remain closed as thousands of pilgrims make their way to the Haram esh-Sharif compound for their daily prayers. Non-Muslims aren’t allowed to enter during this time.

During Ramadan, parts of the Old City are dressed up in paper lanterns of yellow, red and green. In the evenings during iftar, when Muslims break their fast, the Muslim Quarter comes alive. People are seen smoking hookah at the nearby market and playing board games as vendors sell delicious street foods such as kataif pancakes and tamarind and almond drinks. 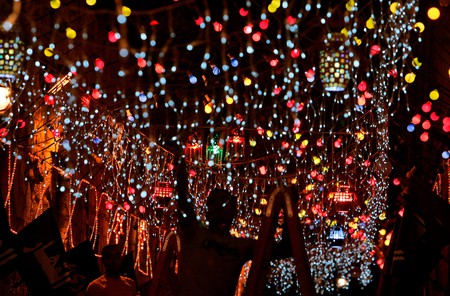 The end of the month-long fasting period is marked by Eid al-Fitr, a three-day festival and one of the holiest times for the community. A festive atmosphere is palpable throughout the Muslim neighbourhoods during this time as locals hand out gifts, sweets and balloons to children, and a lavish feast is prepared at home. Through the narrow alleyways of the Old City, smells of roasted meat and other delicacies waft through the air and if you’re fortunate enough to befriend a local family, you may get invited to a sumptuous dinner and be served dishes such as maqluba (upside-down rice) and katayef (fried pancake filled with cheese or nuts).

Besides meeting and greeting friends and family, young Muslim men take part in horse racing throughout the day at a park just outside the Damascus Gate to celebrate the occasion.

Jerusalem plays a prominent role in the Islamic faith on Lailat al-Miraj, a holiday marking the Prophet Muhammad’s journey from Mecca to the Al-Aqsa Mosque before his ascension to heaven from what is now known as the Dome of the Rock. Islamic belief holds that the angel Gabriel accompanied Prophet Muhammad on this ascension to heaven, where he was able to meet with other important patriarchs such as Abraham and Jesus Christ. Nowadays, families mark the occasion with a pilgrimage up to the Haram esh-Sharif to tell their children the story of Prophet Muhammad’s night journey. Lailat al-Miraj has become emblematic of Jerusalem’s intimate connection to Mecca.

Special celebrations are also held inside the Al-Aqsa Mosque, during which Islamic scholars and imams give speeches. Although it is an auspicious occasion, the holiday is mainly one for introspection and prayer. 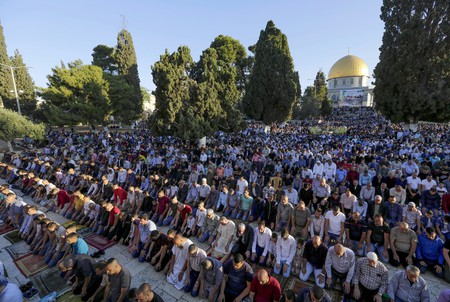 Eid Al-Adha (Feast of the Sacrifice) – celebrated on a different date each year depending on the Islamic lunar calendar – involves the slaughtering of animals to celebrate the biblical patriarch Ibrahim’s (or Abraham) obedience to Allah. According to the Quran, Ibrahim was commanded by God to sacrifice his son Ishmael, but at the last moment was given a sacrificial ram instead, thereby saving the boy. Symbolising the submission to God’s will, Jerusalemites mark the occasion by praying or giving alms. Many also buy an array of sweets from local merchants in the Old City to hand out to friends and the poor. 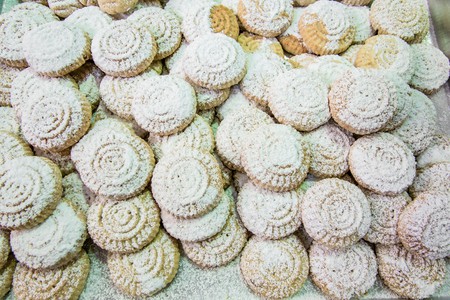 Festival-goers prepare special desserts made with dates and nuts and dress in their finest garments to pray at the Al-Aqsa Mosque, after which they feast on the cooked meat. Travellers can stroll through the Old City to catch special concerts or take part in the holiday feast. Some of the unique dishes prepared for the occasion and shared with guests include ka’ek or ma’amoul, deliciously sweet date cookies served with a strong cup of coffee. 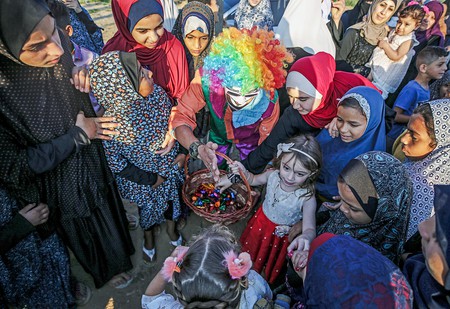 There are many festivals in Judaism that are associated with Jerusalem, but the three most important ones are Sukkot (Tabernacles), Purim and Yom Kippur (Day of Atonement). The Western Wall in the Old City, which is nearest to the ruins of the ancient Jewish temples, plays a key role. Jews follow a lunar calendar and religious festivities therefore fall on different dates each year.

Sukkot, which takes place in late September or early October and lasts seven days, commemorates the ancient Israelites’ 40 years of wandering the desert on their way to the Promised Land following the exodus from Egypt. During this period, observant Jewish residents of Jerusalem build ‘sukkahs’: temporary structures covered with leaves in which they eat all their meals. Sukkot is one of the busiest times in the city: the streets, buses and restaurants are overflowing with people who celebrate the holiday by singing, dancing and feasting.

One of the most popular events is the annual Jerusalem March, a parade that winds its way through the city’s main thoroughfares attracting people from all over the world, including thousands of Evangelical Christian pilgrims who join to show solidarity with Israel. In 2019, the march will take place on 17 October and will begin at 2pm at the north end of Sacher Park. 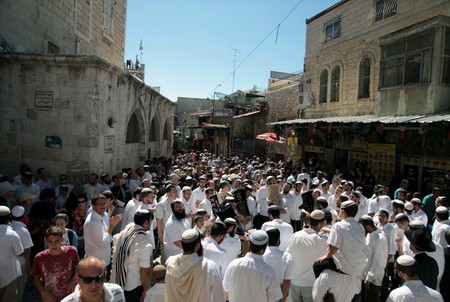 Visit the Western Wall Plaza to witness the semi-annual priestly blessing (date varies), in which male descendants of the Kohanim priestly caste – believed to be descendants of the biblical Moses’ brother Aaron – wrap themselves in prayer shawls and raise their hands to bestow a benediction on the multitudes gathered there. Be aware that several roads near the Old City are closed to private vehicles and traffic is quite heavy during this event.

Purim marks the redemption of the Jews at the hands of their Persian persecutors. Revellers don quirky costumes and party. Interestingly, Jerusalemites celebrate Purim a day after other Jewish Israelis because the Jews in the ancient walled city of Shushan in the Persian empire only prevailed over their enemies a day later. One of the best events to attend is the Nachlaot Street Party, a traditionally artsy masquerade that takes place near the Machane Yehuda Market and features performers, costume competitions and clowns. 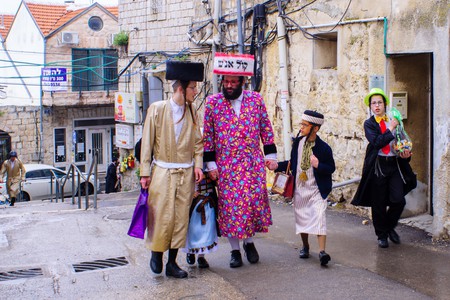 The holiest and most solemn day in the Jewish calendar, Yom Kippur takes place in early autumn just before Sukkot. Eating, drinking, using electricity and work are all strictly forbidden for a 25-hour period as Jews seek repentance for the actions of the previous year. For this reason, the streets are eerily calm and stores, bars and restaurants are all closed. Public transportation is also not available during this period, bringing a usually bustling city to a complete standstill.