The Most Beautiful Mosques in Iran

Jameh Mosque in Yazd | © Ninara / Flickr
Architecturally speaking, few places can contend with the mosques that Iran has to offer. It’s the blend of geometric designs, symmetry, and vibrant colors that dazzle the eyes of visitors and locals alike. Read on to discover the 10 most beautiful mosques in Iran.

Mosque
Shah Cheragh, Shiraz
Shah Cheragh is a mosque and tomb of twin brothers who were the sons of the seventh Shia Imam. With its detailed tiles, gold-dipped minarets, and blue dome, it might look like your ordinary mosque from the outside, but it’s the inside that is jaw-dropping with its thousands of angled shards of glistening mirror that reflect light. It’s no wonder the name of this mirrored mosque translates to “King of Light.”
More Info
Open In Google Maps
District 8 Shiraz, Fars Province, Iran
+987132131368
View menu
Visit website
Visit Facebook page
Send an Email
Give us feedback

Mosque
Nasir ol-Molk Mosque | © MohammadReza Domiri Ganji / WikiCommons
This architectural masterpiece is commonly thought to be the most breathtaking in Iran. Nicknamed the “Pink Mosque” due to its various rose-hued tiles, Nasir ol-Molk is a prime location to spend your morning in Shiraz as sunlight streams in through the stained-glass windows and reflects off the Persian rugs—something that is sure to inject you with a dose of spirituality, no matter what your beliefs may be.
More Info
Open In Google Maps
Lotf Ali Khan Zand Street, Shiraz, Fars Province, Iran
+987132241661
View menu
Visit website
Visit Facebook page
Send an Email
Give us feedback

Esfahan’s Imam Mosque, one of the country’s finest, is known for its blue-hued tiled walls that exude an almost celestial vibe. While it’s most revered for its Islamic calligraphy, open iwans, special acoustic properties, and symmetrical arcades, it’s the domes that seem to captivate visitors, many of whom lie down to contemplate the various mosaics without straining their necks. 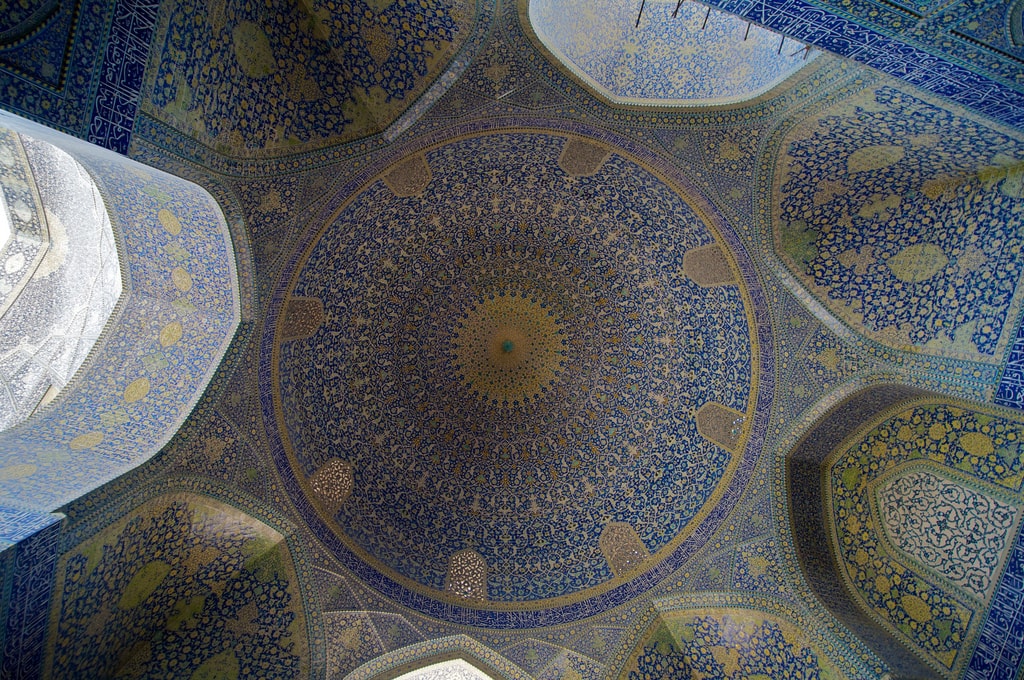 A stone’s throw from Imam Mosque is Sheikh Lotfollah Mosque, best recognized for its defiantly off-center dome and lack of minarets. The cream-hued tiles shift colors as the sun moves throughout the day, giving them a pinkish tint at times. The dome is without a doubt the focal point of attention with its arabesque designs that become smaller as they approach the center. 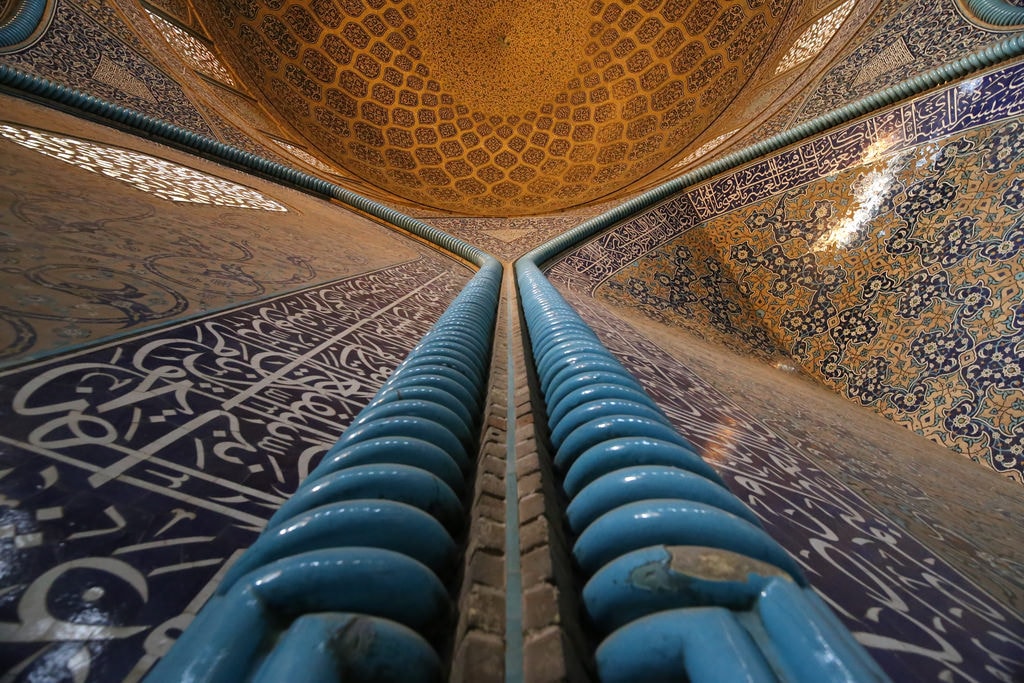 Mosque, Shrine
Fatima Masumeh Shrine | © Diego Delso, delso.photo, License CC-BY-SA / WikiCommons
If your plans have you just passing through Qom, Fatima Masumeh Shrine will make you reconsider. One of Iran’s lesser-known places of worship, this stunning mosque is named for the sister of Imam Reza, the eighth Shia Imam whose shrine is in the holy city of Mashhad. The geometric patterns and floral motifs around the grand entrance nooks add a uniquely feminine touch to this immaculately decorated, spacious shrine, where notable burials ranging from royalty to scholars to clerics are also located.
More Info
Open In Google Maps
Eram Street, Qom, Iran
+982537175305
View menu
Visit website
Visit Facebook page
Send an Email
Give us feedback

The twin minarets of Jameh Mosque soar 52 meters (171 feet) high, dominating and adding a splash of turquoise to the otherwise mud brick skyline. Once the site of a 15th-century fire temple, this mosque offers visitors a dizzying array of artistic features to admire and capture on film. The towering portal is adorned with exquisite calligraphy and complex geometric patterns, while the interior is replete with honeycomb tiles, Kufic script, and plasterwork, all leading to the dreamy star-filled dome. 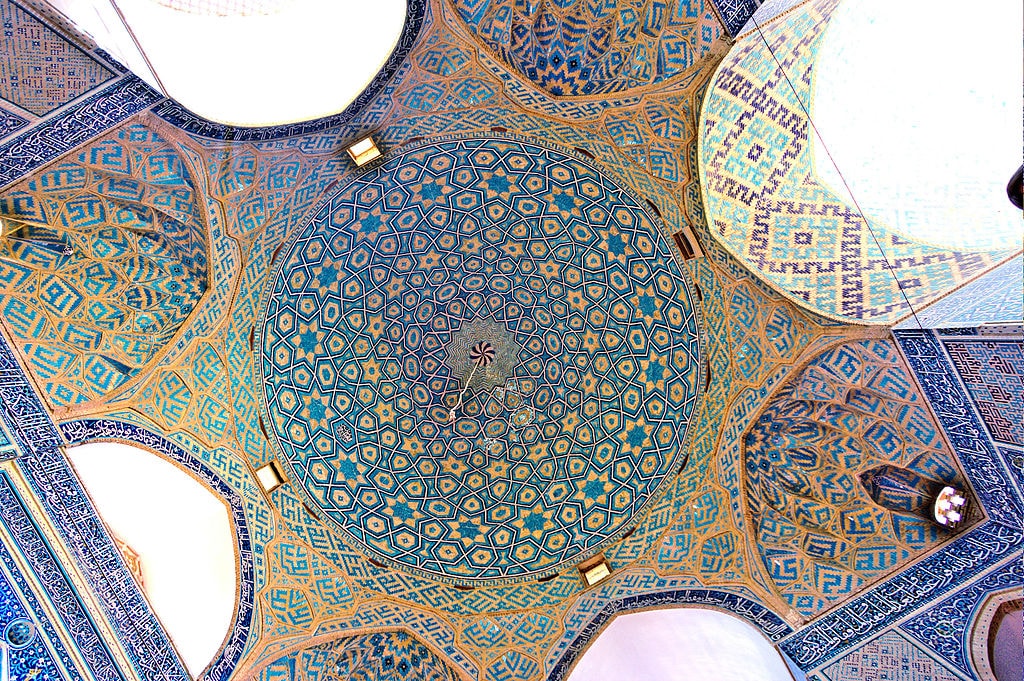 Mosque, Shrine
Sheikh Safi al-Din Khānegāh and Shrine Ensemble, Ardabil
Located in the northwestern city of Ardabil, Sheikh Safi al-Din is the eponymous mosque of the leader of Sufi mysticism. Constructed between the 16th and 18th centuries, it includes a fusion of Sufi and Iranian traditional construction as well as representations of the seven stages and eight attitudes of Sufi mysticism in its architecture. This shrine ensemble joined UNESCO ranks in 2010.
More Info
Open In Google Maps
خيابان شيخ صفي الدين اردبيلي, اردبیل, Iran
+984533242411
View menu
Visit website
Visit Facebook page
Send an Email
Give us feedback

Mosque
Blue Mosque | © Ninara / Flickr
The patchy walls of missing magnificent blue tiles from the imposing entrance of the Blue Mosque are in fact scars it still bears from the damage it suffered in a massive earthquake in 1779. Inside, the mosque displays examples of fine Islamic calligraphy, including Kufic and Thuluth scripts, as well as arabesque and geometric patterns. Not quite as grand or majestic as its brothers in Esfahan or Shiraz, the Blue Mosque is still one of the most beautiful despite its imperfections.
More Info
Open In Google Maps
Khiyaban Tabriz, East Azerbaijan Province, Iran
+984135245202
View menu
Visit website
Visit Facebook page
Send an Email
Give us feedback

Mosque, Shrine
Goharshad Mosque in the Imam Reza Shrine Complex | © Mohebin14 / WikiCommons
Goharshad Mosque was built by order of Empress Goharshad, the wife of a 15th-century Timurid dynasty ruler. Once a free-standing mosque, it is now encompassed within the Imam Reza shrine complex and serves as one of the prayer halls whose courtyard is brimming with pilgrims. The azure dome adds a lovely contrast to its neighboring gold cupola, and beautiful Thuluth inscriptions adorn the walls, making it an exceptional example of Islamic architecture.
More Info
Open In Google Maps
Holy Shrine Mashhad, Razavi Khorasan Province, Iran
+985132232222
View menu
Visit website
Visit Facebook page
Send an Email
Give us feedback
Give us feedback