What Is the Hajj pilgrimage, the Fifth Pillar of Islam? 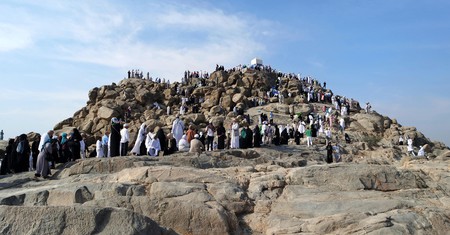 Millions of Muslims across the globe take part in the annual Islamic pilgrimage to the sacred city of Mecca in Saudi Arabia. But what is the hajj and what makes this event so significant?

The hajj, one of the five pillars of Islam, is an Islamic religious pilgrimage that is a mandatory act of worship for all financially and physically capable adult Muslims at least once in their lives. The rituals last five days and take place on the eighth day of the Dhu al-Hijjah lunar month in Mecca, Saudi Arabia. 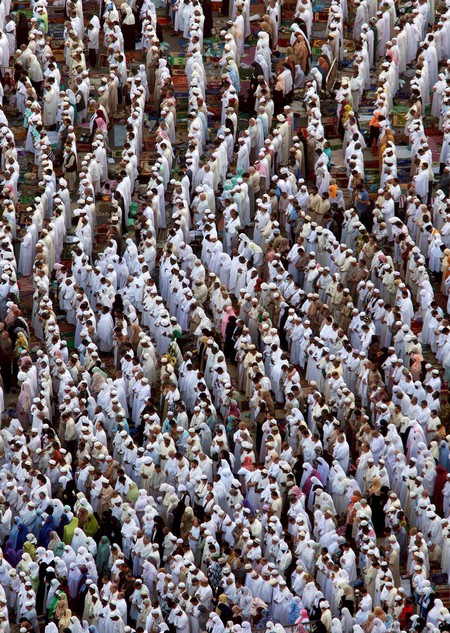 What is the hajj?

The hajj consists of a five-day excursion that takes place in Mecca and at three sites on its outskirts – Arafat, Mina and Muzdalifah.

It differs from the umrah, a non-mandatory pilgrimage to Mecca that can be taken at any point in the year.

During the hajj, pilgrims perform a series of rituals as an act of worship, and it is believed that the previous sins of a pilgrim are absolved as a result of the journey.

According to Islamic tradition, the Prophet Muhammad carried out the first pilgrimage to Mecca in AD 628, with 1,400 followers by his side. On this occasion, known as the Farewell Pilgrimage in Islam, the pilgrims followed in the footsteps of the Prophet Abraham, founder of the Abrahamic religions (Judaism, Christianity and Islam).

Abraham is an important figure in Islam

Abraham, the common patriarch of the three Abrahamic religions, is considered a prophet in Islam.

Like Judaism and Christianity, Islam tells the story of Abraham, who was willing to sacrifice his son when God commanded him to do so. After seeing that Abraham had passed the test of faith, God asked Abraham to sacrifice an animal instead.

In Judaism and Christianity, the son was Isaac. In Islam, it was the Prophet Abraham’s other son, Ishmael.

According to Islam, Abraham’s faith was also tested when he was asked to leave his wife, Hajra, and their young son, Ishmael, in a barren desert between two hills – Safa and Marwah – in Mecca. Hajra ran between the hills seven times to search for water for her son. Eventually, Ishmael struck the ground, causing a well of flowing water to spring through.

When Abraham came back for his family, he was amazed that a source of water, now known as the sacred Well of Zamzam, had appeared in the heart of the desert.

Abraham and Ishmael eventually built the Kaaba, the black cube-shaped structure in Mecca, as a place to worship God, just 20 metres (66 feet) from the sacred well.

The hajj commemorates this story.

What are the rituals of the hajj?

Muslims enter Mecca in ihram, a state of spiritual purity in which people practise simplicity and humility, giving up their materialistic desires.

To this end, men’s garments often consist of two un-hemmed sheets, seamless in order to avoid displays of elaborate embroidery. Women wear loose-fitting clothes, often black, that cover their entire bodies. While many Muslim women choose to cover their faces outside ihram, this practice is forbidden during the spiritual state. Neither men nor women can wear make-up, cologne or perfume during this time, and killing animals, getting into fights and having sex are also forbidden. 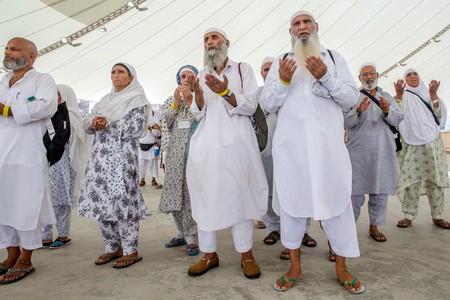 Muslim pilgrims on the last day of the annual hajj pilgrimage in Mina, outside the holy city of Mecca | © Dar Yasin/AP/REX/Shutterstock

The hajj begins in what is now the sanctuary of the Grand Mosque in Mecca. Pilgrims first perform a tawaf – they circle the Kaaba in an anti-clockwise direction seven times, and then walk between the hills of Safa and Marwa (just like Hajra did) seven times. 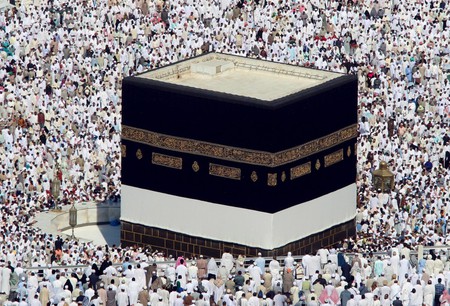 Pilgrims will also drink Zamzam water from the sacred well, which is distributed by officials and available in taps around Mecca. They stay the night in Mina, where Abraham sacrificed the animal to God.

On the second day, the pilgrims head to Arafat, a large field on the outskirts of Mecca, to attend the hajj sermon, which is delivered in honour of the sermon given by the Prophet Muhammad at Arafat during his hajj. 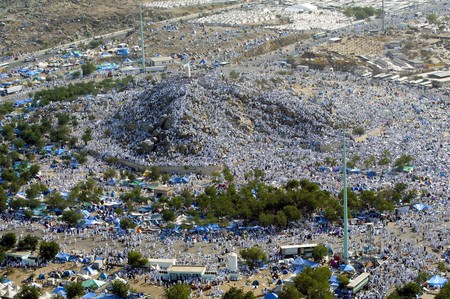 After sunset, Muslims move on to Muzdalifah, where they spend the night praying and resting, and collect dozens of pebbles for the next day’s rituals.

The final days of the hajj

On the third day, pilgrims return to Mina and throw seven stones at three pillars at the site.

This day coincides with the day Abraham offered to sacrifice his son to God. The three pillars symbolise the three times that the devil tried to dissuade Abraham from the sacrifice, and the throwing of pebbles represents the stoning of the devil, as Abraham used seven stones to destroy him. (Seven is also a holy number in Islam.) 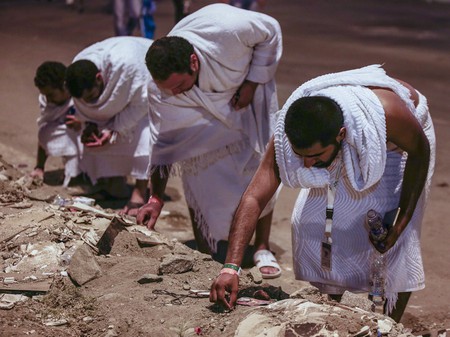 Muslims around the world also celebrate Eid al-Adha on this day. During this festival, the Festival of the Sacrifice, many offer a goat, sheep or cow in a ritual known as hadi, honouring Abraham’s sacrifice to God. This act is mandatory for all pilgrims, too, though many choose to pay the necessary money to a slaughterhouse in Mecca, where the meat is then donated to charity.

After Eid, pilgrims can either return to Mina or stay elsewhere in Mecca, but they must pelt the pillars once each day for the next two or three days, in honour of the three times that Abraham was tempted by the devil and warded him off with seven stones.

During the final days of the hajj, pilgrims head back to Mecca to perform a final tawaf around the Kaaba and seven rounds between the hills of Safa and Marwa. 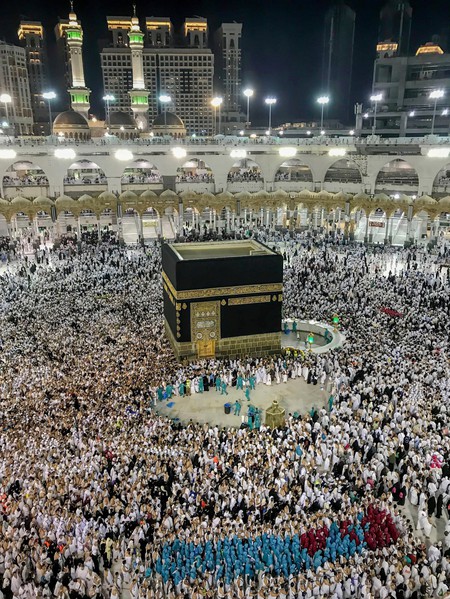 Men shave their heads and women cut off locks of their hair in honour of the Prophet Muhammad, who did so after his hajj. The act marks the end of the state of ihram and is an act of sacrifice and renewal.

This is an updated version of an article originally written by Amani Sharif.