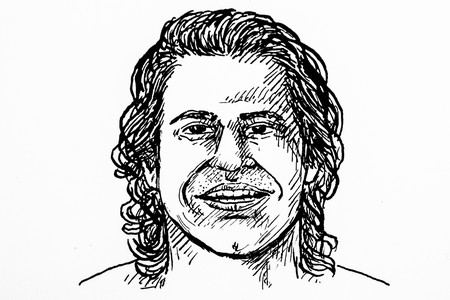 Has translated writers from: Lebanon, Morocco, Iraq, Palestine and Egypt

What are you currently translating?
I’m working on two projects right now, and actually just sent samples out to publishers this past week for both of them. One is a New and Selected Poems book by the the Palestinian poet Najwan Darwish, a poet whose work I really love. His first book in English, Nothing More to Lose, has done quite well, so I’m excited to be working on a second book by him. He is at the forefront of a younger generation of Palestinian writers, and his work is redefining the contours of “resistance literature” in bold and unexpected ways.
The other project I’m currently translating is called “the Mu’allaqat,” and I’ve tentatively titled the English The Hanging Poems: The Ten Classic Works of Pre-Islamic Poetry. This is the most famous collection of pre-Islamic (6th- and early 7th-century) Arabic poetry, poems that were supposedly hung from the sacred black stone of the Kaaba in Mecca due to their fame, and they detail the often harsh and relentless desert life in what is now called the Arabian Peninsula.

What approach or procedures do you take when translating?
I’m not sure if I have a specific ‘approach’ per se, but I do have a few simple guidelines that guide the process, particularly with regards to poetry (though they also apply to prose): First, although the themes and topics (and even some specific terms) of the text might be foreign, the translated text should always read as if it were written by an English-language poet. In other words, it needs to sound like exceptional poetry in English, which means that some “sacrifices” or minor changes in terms of meaning or structure might need to be made. For me, the translator should never, under any circumstances, betray the poetic quality of the text—the poetic quality is the core of a poem. This is the primary criterion. Once this is met, then the secondary criterion comes in: Keep the translation as close as humanly possible to the source text, but without ever betraying the first criterion.

What kinds of works or regions do you gravitate toward?
Until now, I’ve tended to gravitate towards authors whose works have never before been published in English—I like bringing authors into the English-speaking world for the first time. Right now, I’m leaning more specifically towards poetry (or prose works that are extremely poetic in their style), and even more specifically towards poetic works that also have some kind of spiritual side. I’m an avid meditation practitioner, and have spent a good part of the last few years on silent retreats, so I hope to begin translating the works of some of the great classical Arab mystic poets once my current projects are over—most of them have never been translated into English before, surprisingly.

Who or what are some untranslated writers or works that you would like to see in English? Why?
I would like to see some more of the great works of Classical Arabic literature appear in fluid translations, and at presses with broad national distribution, where they might actually be read outside of academic circles. I think this will be part of my work as a translator over the next few years—to try to bring a few of these works into the so-called ‘canon’ of world literature (and I believe distribution is important for this). Most people in the English-speaking world, even those with a literary background, are only familiar with two Classical Arabic texts: The Koran, and the 1,001 Nights. I already mentioned the main collection of pre-Islamic Arabic poetry above, which I think is absolutely stunning, and which I believe needs a new and lively translation in English. There are many many other works (and other translators have begun work on some of them), but I tend to focus on the poetry, so I’m beginning to think about translating the work of one of the most famous mystic poets in the Arabic-language tradition, Mansour al-Hallaj, who was tortured and then executed in Baghdad in 922 AD for uttering the blasphemous words, “I am the truth.”

What are some of the more interesting literary developments happening in the language or region you translate from?
There’s a huge amount of literature coming from all over the Middle East, so it’s difficult for me to talk about developments happening across the region as a whole. But with regards to Palestinian poetry in particular (and perhaps Arabic poetry more broadly), I do feel like there has been a change in sensibility from the poetry that dominated the latter half of the 20th century. The poetry of outright (antagonistic) resistance and the poetry that took up a heroic stance seems to now be giving way to poetry that frequently uses irony and humor to describe often dire conditions—I view these works as poetic ‘black comedies.’ This is just one development, but it speaks to my sensibility as a translator.

What is a recent translation challenge you faced?
I’ll be completely honest and frank here: One of the biggest perennial challenges I face is that of funding. Although I recently completed my PhD, I’ve decided not to take the tenure-track academic route (or teach anything for the time being), which means that all of my income currently comes from freelance translating and editing. Since literary translation generally pays less than other translation work, I often have to balance my literary projects with other translation projects (frequently from French or German) that allow me to pay the bills. More specifically, my project to translate the major collection of pre-Islamic poetry is, technically, a re-translation, so that makes it particularly hard to secure outside grants, as those organizations generally prefer to fund brand-new translations. The issue of funding might be more of a life challenge than a translation challenge per se, but it does have a major impact on what projects I’m able to take on.