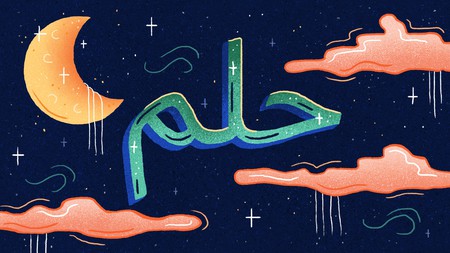 An ancient Quranic language that originated in the Arabian peninsula, Arabic has indelibly shaped civilisations across the Middle East and Africa. Today it is the fifth most spoken language in the world, shared by over 400 million people. From literature and poetry, to arts, music, film and everyday life, the Arabic language is absolutely worth exploring.

‘Nur’, meaning light, is a common unisex name. It can be derived in a number of ways to compliment someone or create compound names connected to religion, like ‘Nur Allah’ (light of God), or ‘Nur al-Din’ (light of religion).

The term ‘ishq’ refers to a passionate and irresistible level of love. It derives from the verbal root ‘asaq’, meaning to stick or cling onto. The word is also connected to the term ‘asaqah’, meaning ivy.

Mothers are key figures in Arab culture, so this word has connotations of high respect and admiration. The term can also be added to the end of other words to mean the mother of someone or the foundation for something.

‘Habibi’ (‘habibti’ for girls) derives from the word ‘hubb’, meaning love. It literally translates to ‘my love’, and can be used in formal and informal contexts, often in songs or when referring to a partner.

‘Quwa’ is a common Arabic word used to express strength or power. You can use it to describe someone’s strength physically or mentally. In Islam, it is understood that no one is more powerful than God.

‘Qamar’, meaning moon, is extremely important to Islam. Qamar refers to one of the suras of the Quran regarding Judgement Day and also relates to the Islamic calendar, which is lunar-based. You can also say ‘ya qamar’ to refer to someone as your moon.

When you refer to someone as ‘qalb’, meaning heart, you are elevating their importance to your life. The term emphasises a hard ‘q’ sound and is not to be confused with the term ‘kalb’, meaning dog!

‘Shams’, meaning sun, has been used in a variety of contexts in the Arabic language. It is a common name for places because of the associated brightness and radiance of the sun. It has also been used to describe musicians, places and religious concepts or deities.

‘Salam’ is one of the simplest but most powerful terms in the Arabic language. It means ‘peace’, and can be used to greet strangers on the street to convey respect and good intentions. It can also be used at the end of a conversation to wish someone well.

The word ‘saha’ is said to wish you good health or blessings. A common derivative of the word, ‘sahtayn’ is always said before starting a meal. The response, ‘ala qalbak’ means ‘to your heart’.

‘Helm’ is the singular word for dream; the plural term is ‘ahlam’. You can say goodnight to someone by saying ‘ahlam saeeda’, which means that you hope the person has happy dreams.