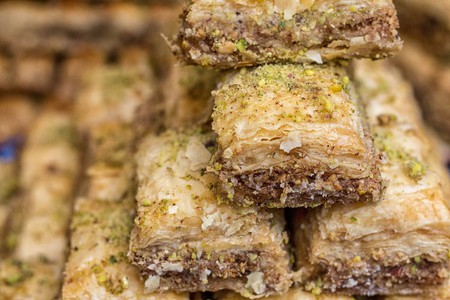 Middle Eastern cuisine is renowned for its exquisite flavours. It encompasses a wide range of dishes, from mouthwatering desserts to street food classics that have skyrocketed to global popularity in recent years. Here’s an eclectic list of foods from the region that are sure to delight your tastebuds!

Baklava is popular throughout the Middle East and is a must for anyone with a sweet tooth. It consists of phyllo dough layered with honey and nuts and has a deliciously soft and flaky texture. A small piece of this scrumptious dessert is the perfect way to finish any meal. 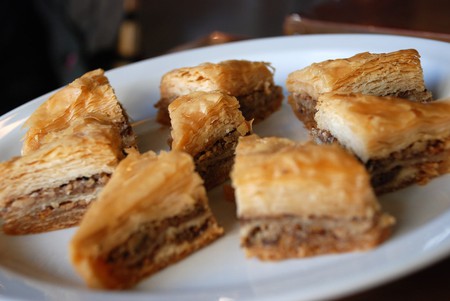 This is a delicious dessert with Palestinian roots. A sweet, cheese-filled pastry (a seemingly strange combination, but it works!), knafeh is soaked in sugar syrup, flavoured with orange or rose water and sprinkled with chopped pistachios.

Malabi is a creamy, milk-based dessert that is hugely popular throughout the Middle East. Like knafeh, this tasty pudding is flavoured with rose water, giving it a sweet but gentle taste, and topped with pistachios. In Israel, malabi is ubiquitous and can be found in street stands and fancy restaurants alike.

This dense, crumbly dessert has roots in the Middle East as well as in the Balkans and comes in numerous variations. Indeed, ‘halva’ simply refers to a dessert with a nut butter or flour base, derived from the Arabic word for ‘sweet’. In Israel, halva is based on sesame tahini and is a must try for those with a sweet tooth. 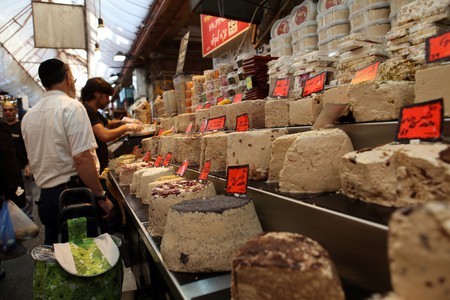 Shawarma is ubiquitous throughout the Middle East, and indeed, in many European countries. The meat, which can be either lamb, chicken, turkey, beef or veal, is slow-cooked on a rotating skewer, before being shaved off and stuffed into a pita or a laffa (a giant wrap), typically accompanied with hummus, tehina (sesame seed dip), chopped lettuce, pickles, cabbage and more, depending on your preference.

Surely one of the Middle East’s finest exports, this chickpea-based dish is a staple in households and cultures throughout the Levant. It can come in many different forms from plain to hummus musabaha, hummus shakshuka and so on. In Israel, it is usually served with pita bread (which you’ll use to mop up every last bit of hummus) and various extras such as a hard boiled egg, raw onions, pickles and olives. 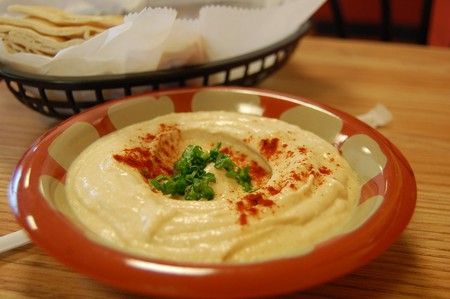 Shakshuka is becoming increasingly popular in Western culinary scenes and is perfect for breakfast or brunch. Hot, hearty and filling, it is based on a tomato and pepper sauce with garlic and onion, spiced with cumin and chilli flakes, and finished off with poached eggs on top and a sprinkling of parsley. Advanced level: try a hummus shakshuka, which is exactly what it sounds like: a bowl of hummus with shakshuka in the middle.

Jachnun is a popular dish in Israel that was brought over by Yemenite Jewish immigrants. Traditionally eaten on Shabbat morning, it is prepared using dough, rolled up and baked overnight. The final product is a dark, amber coloured pastry, slightly sweet in taste. Served with a tomato dip, boiled eggs and zhug (a delicious Middle Eastern hot sauce), jachnun is a must-try when in Israel. Be warned: one serving of jachnun on its own contains between 600 to 1,000 calories.

Like Jachnun, Malawach was brought to Israel by Yemenite Jewish immigrants and today, it is a popular street food dish. It consists of a fried pastry that can be eaten sweet with honey, or savoury with a hard-boiled egg, tomato dip and zhug (spicy dip). It can also be served as a wrap (memulawach) filled with delicious ingredients such as tehina, hummus, a hard boiled egg, eggplants, fried onions, pickles and more.

This delicious street food dish is said to have been created in the 1960s by Sabich Tzvi Halbi, a Jewish Iraqi immigrant in Israel whose tiny sabich joint still operates today near Tel Aviv. It is one of the most Israeli dishes you can find and it has evolved from its early days in Israel’s Iraqi Jewish community to being one of the most popular street food dishes in the country. Served in a pita, it consists of fried eggplants, hard boiled eggs, hummus, tahini sauce, a drizzle of amba (a zesty mango sauce), chopped lettuce and pickles. Advanced patrons may order a cheese sabich, which replaces the hummus with goat cheese and feta, giving it a different but equally delicious flavour.

The king of Middle Eastern street food, falafel is a deep-fried chickpea ball that is typically served in a pita accompanied with hummus, tahini, chopped lettuce, and fried eggplants, or as a side dish alongside a bowl of hummus. Not only are they extremely cheap, filling and tasty, but they’re vegan, too!