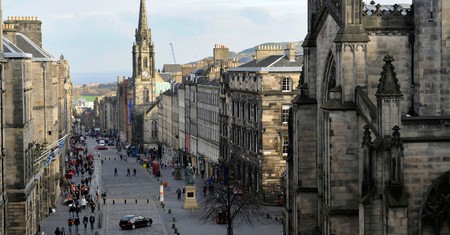 Unleash your inner witch or wizard in Edinburgh – the city that inspired the Harry Potter series. Follow Culture Trip’s guide tailored specifically for fans, and recapture the magic.

While the Wizarding World remains firmly behind the bricks of Platform 9¾, there’s always magic to be found in Scotland’s capital. Visitors can sip coffee in the place where Rowling first penned Harry Potter and the Philosopher’s Stone (1997) or wander down Edinburgh’s very own Diagon Alley.

Fling on your house scarf and fashion yourself a cloak because it’s time to relive the adventure in the city’s most Potter-esque locations. Accio the ultimate Harry Potter tour of Edinburgh.

Harry Potter-themed hotels to stay in

Superfans need look no further than Edinburgh’s Canongate for Potter-themed accommodation. This apartment is fitted out like a Gryffindor dorm room, complete with gold and red decor, worn-and-torn books and candles that appear to be floating. It even features a desk and a mirror once owned by JK Rowling.

For a luxury hotel experience, check in to The Balmoral on Princes Street, where the author finished the last few chapters of Harry Potter and the Deathly Hallows (2007). Alternatively, The Witchery’s Baroque-style suites are reminiscent of Hogwarts dorms, with plush furnishings, antiques and four-poster beds. On a budget? Make sure to check in at Castle Rock Hostel, which has a Harry Potter-themed dorm. 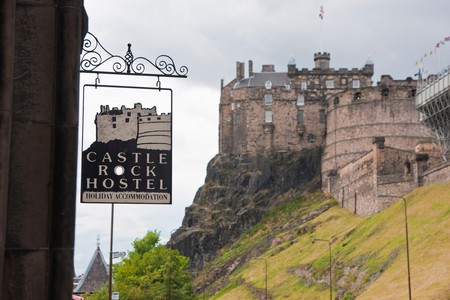 Sip coffee at The Elephant House

Kick the day off with breakfast at The Elephant House. Rowling frequently sat here and scribbled notes while penning Harry Potter, sitting in the back room overlooking Edinburgh Castle. Order a hot chocolate and one of the café’s tasty fruit scones before sitting back to enjoy the same view as she did, 20 years ago. 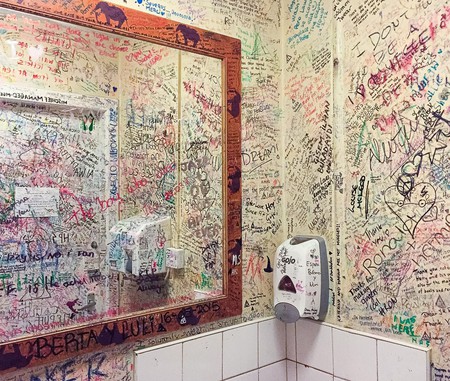 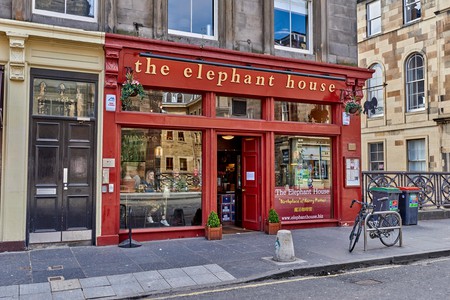 A small plaque recognising the author lies outside The Elephant House. However, it is the café’s bathroom that serves as a true measure of fan devotion, with every inch of the walls etched with international declarations of Potter love.

Finish up your coffee and walk the two minutes to Victoria Street and Candlemaker Row. The latter originally functioned as the epicentre of the city’s candle-making industry, with a scent once so pungent that the street’s residents tried to shut the trade down. Nowadays, much fresher smelling, the narrow streets are believed to be the inspiration behind Diagon Alley, the wizarding world’s go-to shopping location. 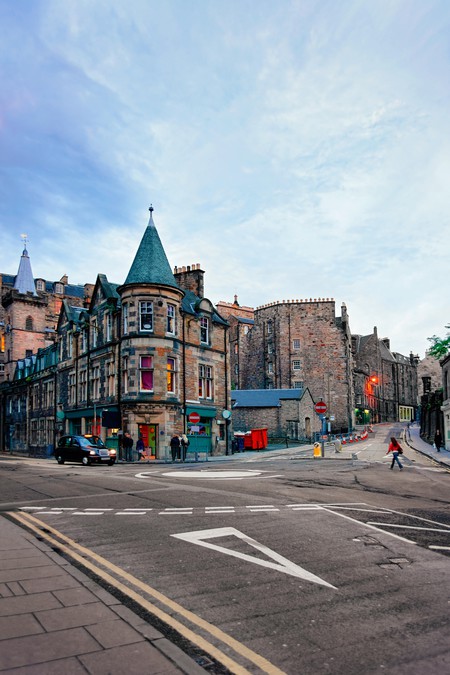 Although you may struggle to source a wand or cauldron, you can step inside quaint antique stores and tea merchants, whose structures have been around since the street’s completion in 1834. Diagon House, a unique Harry Potter-themed gift shop, sells wares such as Nimbus 2000 replicas and Gryffindor wax seals.

A bludger’s throw from Candlemaker Row lies Greyfriars Kirkyard, a 16th-century cemetery that is one of the oldest in Edinburgh. Between Rowling’s café-based writing stints, she frequented the cemetery for inspiration. Take a wander among the graves to see if you can spot the headstone of Thomas Riddell, Esquire of Befsborough, whose name was taken by the Dark Lord Voldemort himself. Keep your eyes peeled and you might also find the surnames of Gryffindor’s Head of House and a particular mad-eyed professor.

Wander five minutes to the end of the Grassmarket to reach Armchair Books. Its Persian rugs, low lighting, ladders and floor-to-ceiling stacks of books lend the shop a distinctly olde-worlde atmosphere. It may put visitors in mind of the Wizarding World’s Flourish and Blotts. Navigate dusty towers of fiction, and pore over centuries-old Shakespeare editions. If you’re lucky, pick up a once-loved copy of Harry Potter.

Fuel up where JK Rowling used to write

It’s time for lunch! Another of JK Rowling’s favourite writing spots was Nicolson’s Cafe, co-owned by her brother-in-law. A popular bistro called Spoon has now replaced it. The Nicolson Street venue boasts full-length windows, mismatched furniture and a simple yet delicious lunch menu of falafel, wok-fried squid and bowls of ramen. 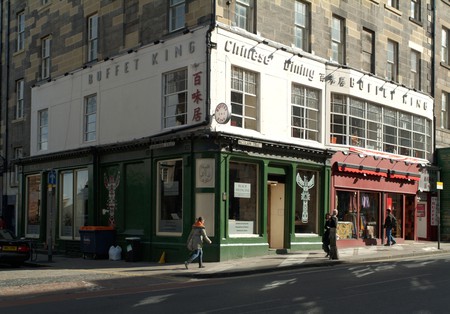 Order something to eat and imagine the chapters of Harry Potter coming to life. Don’t forget to grab the farthest corner table, which was rumoured to be the author’s preferred spot.

Wish you were butterbeer at The Dog House

Just under five minutes from Spoon is where you’ll find the perfect beverage to wash down your lunch. The Dog House on Clerk Street serves delicious pints of butterbeer, made using butter-flavoured syrup mixed with Foster’s lager. It may sound unsavoury. However, take a sip and you’ll find it tastes a bit like buttery popcorn. At £4 a flagon, it’s dangerously easy to drink.

A mishmash of cosy armchairs, eccentric interiors and a constant buzz of chatter makes this the muggle world’s answer to The Three Broomsticks.

Get caught bronze-handed on the Royal Mile

A 10-minute walk from The Dog House is where you’ll discover the handprints of JK Rowling immortalised in bronze in the courtyard of the City Chambers on the Royal Mile, a historic meeting place for Edinburgh Council members.

In a city famous for its literary giants, Potterheads would do well to familiarise themselves with the Edinburgh authors who were making waves long before Rowling came along. A few hundred yards from the City Chambers, you’ll find The Writers’ Museum, which features the literature and personal belongings of celebrated Scottish writers Robert Louis Stevenson, Robert Burns and Sir Walter Scott.

You will also find quotes from these writers and more of their significant peers on the flagstones of Makars’ Court, located outside the museum. 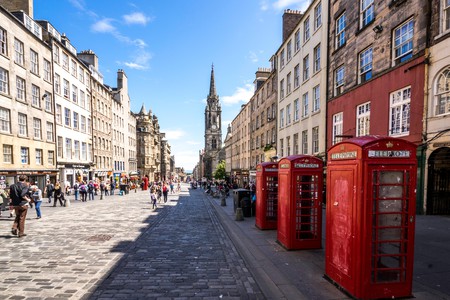 Be enchanted at The Witchery

For a dinner setting that rivals Hogwarts’ Great Hall, look no further than The Witchery, situated down a narrow, cobbled alleyway a five-minute walk from Edinburgh Castle.

Set in a former 16th-century merchant’s house, this boutique hotel is named after the witches who were burned at the stake on nearby Castlehill. Ornate oak panelling, hanging tapestries and candlelit tables lend this Baroque-style interior a rather eerie atmosphere, especially at the witching hour.

The dinner menu at its five-star restaurant doesn’t come cheap. However, for £40, you can enjoy three courses of Scottish produce, including locally sourced pan-roasted cod and excellent Hebridean blue cheese. 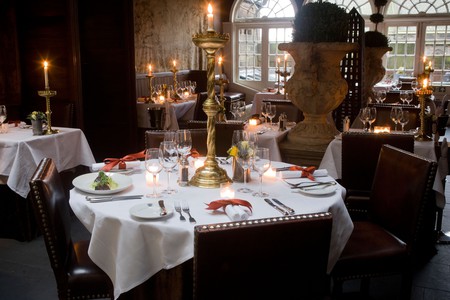 Concoct your own cocktail at The Cauldron

Behind an unassuming black door on the New Town’s Frederick Street lies one of Edinburgh’s most exciting Harry Potter offerings.

Make your way downstairs and pull aside a heavy velvet curtain. Now, prepare to be transported into the other-worldly pop-up bar that is The Cauldron. In Edinburgh until at least late November 2019, the venue has plans to become a permanent fixture on the local bar scene.

The Cauldron aims to bring fantastical concepts to life in the form of dramatic beverages, each with a caution. Signature cocktails include vodka-based Impish Delight – “colourless and odourless: may cause you to spill your innermost secrets”. The pale pink Grogish, made with cachaça, could bring on “a powerful sleep”.

Visitors can also create three drinks during a one-hour-and-45-minute class, using ingredients such as Fairy Dust (dry ice), Dragon’s Tears (Angostura Bitters) and Bladderwort Nectar (home-made thyme syrup). Throw on a cloak. Then pick up your wand – which unlocks cupboards and pours drinks – and whip up a concoction complete with plumes of smoke and bursts of fire, for a fitting activity to round out a positively wizardly weekend.

This is an updated version of an article written by Tori Chalmers.