The Best Vegan and Vegetarian Restaurants in Edinburgh 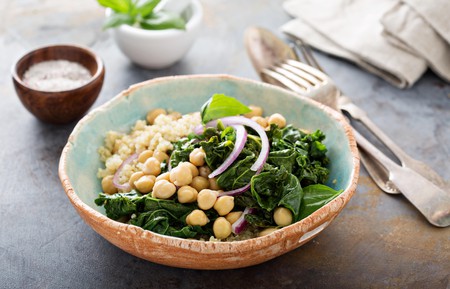 If you’re searching for vegan or vegetarian restaurants in Edinburgh, then look no further. Culture Trip highlights the very best herbivorous venues in the Scottish capital.

Edinburgh’s vegan and vegetarian scene is blossoming. Despite Scotland’s reputation for steak pies and angus beef, you can now find plant-based choices in almost every bar and restaurant, from seitan to superfood brunches. Culture Trip spoke with Edinburgh-based vegan blogger Ruth Lewis, founder of holistic nutrition service New You Nutrition and Wellbeing, for her expert opinion on the capital’s favourite vegan and vegetarian venues.

Hendersons Salad Table has been a sanctuary for Edinburgh’s vegetarians since 1962, at a time when the lifestyle was for ‘cranks’. Its self-service basement salad bar was, back then, considered incredibly innovative, where you could try almost-unheard-of foods like avocados and olives. The signature dish is the vegan haggis, neeps and tatties. This is best followed by their heavenly coconut pots. As well as the Salad Table, Hendersons has several venues across Edinburgh: their bistro on Thistle Street is fully vegan, as is the café near Scottish Parliament, on Holyrood Road. “When I first became vegan, there were no fully vegan places apart from Hendersons,” says Ruth. “But in the last couple of years across Edinburgh the scene has taken off, and it’s this Edinburgh institution that has led the way.” 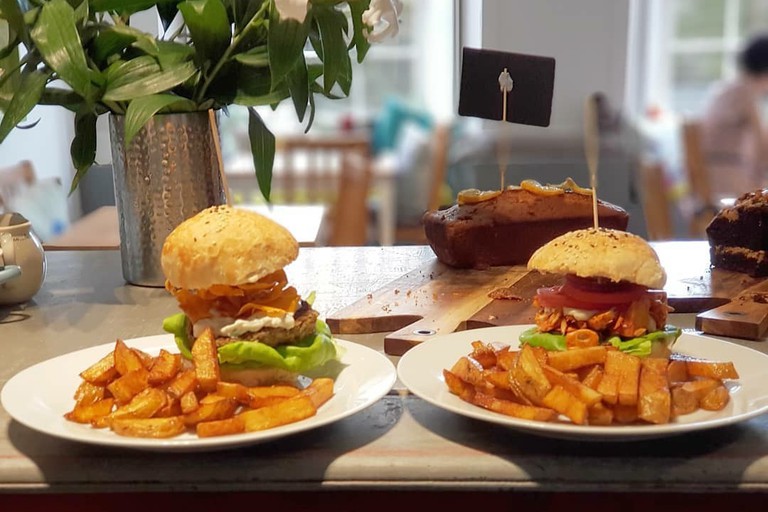 If you walk past Edinburgh Bus Station, you’ll pass Holy Cow: an unassuming (but very popular) café down the steps of a stone tenement building. It is a clean, tranquil spot beside a busy junction, with a simple white interior and wooden tables. The speciality at Holy Cow are their ‘Muu burgers’, which come in a range of flavours such as Thai carrot and Vietnamese tofu. The café also has impressive vegan desserts, with its range of irresistible tropical-hued cheesecakes.

This vegan café does a mean dairy-free latte and vegan mac and cheese, hidden in a quiet cobbled alley behind George Street. The kitsch interior (complete with pink and gold bathroom) complements the display of delectable, unicorn-hued cupcakes, making for a delightful sensory overload. The s’mores version uses chickpea syrup for its meringue decoration.

Give yoga a go at Beetroot Sauvage 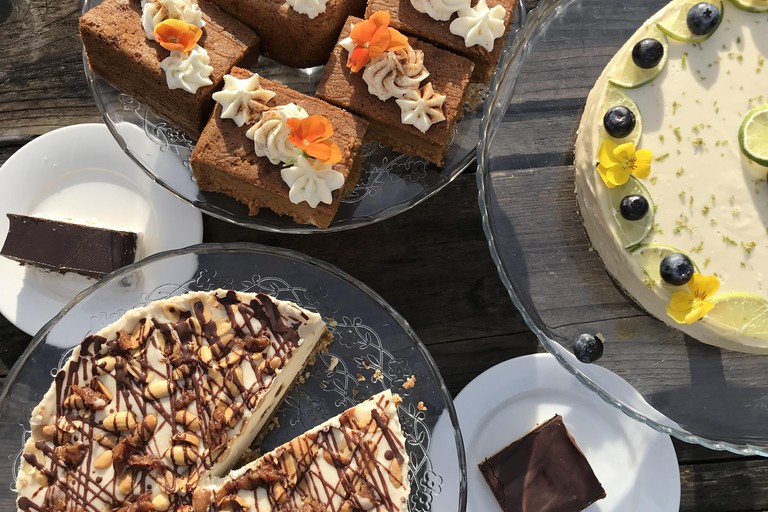 Vegan food after yoga sounds like an ideal combination, which makes Beetroot Sauvage irresistible to Edinburgh’s health nuts. Situated in the Grange, this venue serves as a collective space where you can salute the sun in their wellness centre. After your stretch, enjoy the family-friendly café with a vegan all-day breakfast and plant-based smoothies. “When I had the tofu scramble croissant at Beetroot Sauvage, it was the first time I had a croissant since becoming vegan,” says Ruth. “I was really inspired.” 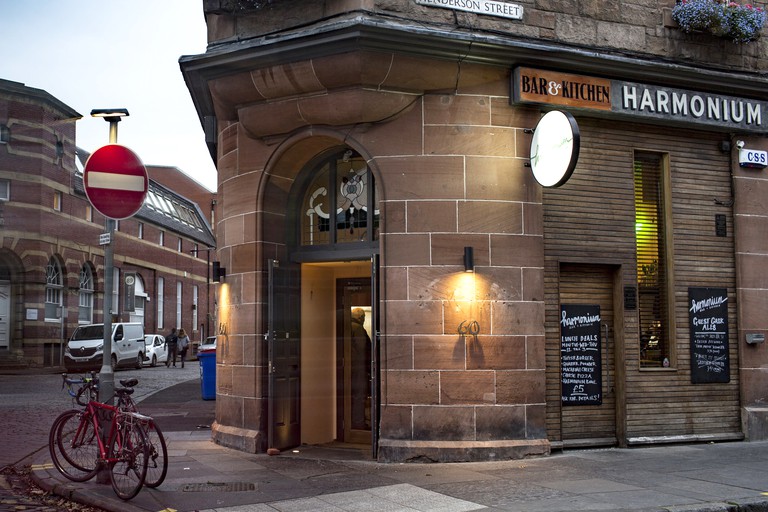 Harmonium offers vegan cuisine that everyone will enjoy | © Harmonium

Brought to Edinburgh by the people behind Glasgow’s fashionable Flying Duck, Harmonium evokes Leith’s maritime history with nautical decor. With offerings like chicken parmigiana and ground beef tacos, it might not be obvious they are meat-free. But trust that it is all 100 percent vegan and delicious.

Tuck into a healthy breakfast at Pumpkin Brown 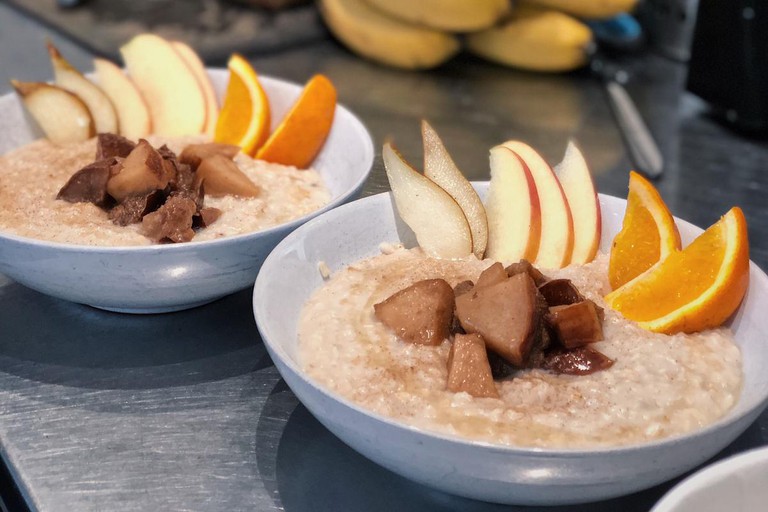 Located in the busy Grassmarket, Pumpkin Brown prides itself on raw, organic vegan food which is also gluten-free. It’s particularly good for a healthy breakfast, serving their signature açaí bowls and porridge loaded with toppings. While it may be a little expensive, every item here is packed with nutrition and pretty enough for Instagram envy.

Dine in style at Thrive Bar and Kitchen

Thrive is located in trendy Bruntsfield, an area known for its independent boutiques and cafés. The stylish venue evokes a calming atmosphere, with natural-looking green and taupe interiors. You can choose between a vegan/vegetarian brunch menu, or a strictly vegan dinner set. Burgers are made from seitan, while the nachos come with ‘cheeze’: a cashew and cauliflower sauce with the taste and texture of the real stuff.

Enjoy your favourite Italian food with a vegan twist at Novapizza 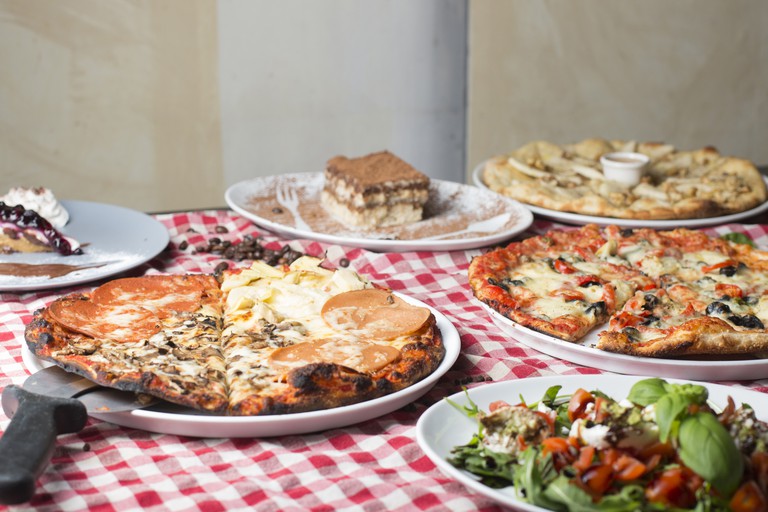 Novapizza meets all your vegan pizza needs | Courtesy of Novapizza

Novapizza is a small, family-run trattoria close to Stockbridge, with an atmosphere so cosy you’ll feel like you’ve come home. Be safe in the knowledge that the pepperoni and mozzarella pizza you have been craving is in sight (and is completely vegan).

Choose from the 'Lucky Pig' menu at Paradise Palms

Fake palm trees, velvet curtains and a ceiling covered in soft toys decorate this trendy bar, which is packed most evenings with a young and hip crowd (who come for the food and stay for the hip-hop and electronica playlist). The vegan ‘Lucky Pig’ menu is inspired by American diners, offering dirty fries or jackfruit nachos, best washed down with a vegan white Russian. There’s even a small record shop in-store, selling merchandise from local artists.

Come to the Forest Cafe for the food, stay for the community vibes

Cafe, Coffee, Vegetarian, Vegan
Facebook
Email
Twitter
Pinterest
Copy link
Share
Map View
If you are looking for a place with a little community spirit, then head straight for the Forest Cafe. Pop in for food, and stay for the music nights and parties. Alternatively, you can roll up your sleeves and get involved in its many volunteering initiatives. “The Forest Cafe has a proper hippie vibe to it,” says Ruth. “On top of enjoying good wholesome vegetarian food such as beetroot and lentil soup, by visiting it you are seeing a part of [the real] Edinburgh.”
Open In Google Maps
141 Lauriston Place, Edinburgh, Scotland, EH3 9JN, United Kingdom
+441312294922
Visit Website
Give us feedback

Indulge in the flavours of India at Annakut 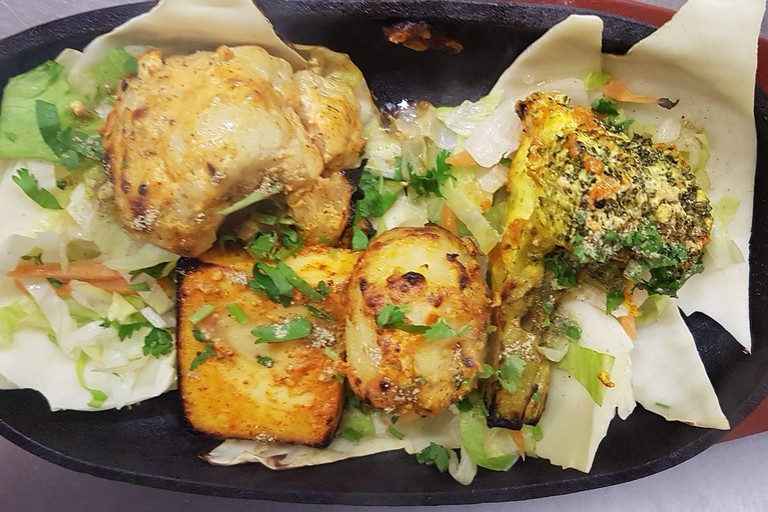 Annakut is known for its delectable Indian fare | Courtesy of Annakut

Annakut serves up mouth-watering food from three different regions in India: South India, Gujarat and the Punjab. It’s a great place to order a range of succulent curries and street food bites to share with friends, such as the protein-packed vegetarian spicy keema, or the tangy paneer bhurji. “Annakut serves delicious food at good value, with a lunchtime buffet and really friendly service,” says Ruth. “I have the vegan thali, which is always a good option for sampling little portions of different dishes.”

This cosy, family-run bar and restaurant on the Shore has great vegetarian options, as well as a secret vegan menu which you have to ask for at the bar. Their tasty offerings include the ‘Barry Brekkie’: a full Scottish breakfast that includes nutty haggis, mushrooms and spinach. To round the meal off, there’s even vegan sticky toffee pudding. For an extra bit of fun, Roseleaf has funky hats and signature cocktails served in teapots. Go wild.

While the menu isn’t strictly vegan and vegetarian, the café and bar at the Filmhouse does plant-based food exceedingly well. It serves classic fare, such as baked potatoes with vegan spicy bean filling, huge portions of vegetarian chilli, falafels and hummus. It is also a great pre-movie hangout, with a programme of the latest releases and old classics.

Help the environment at Seeds For The Soul Ltd 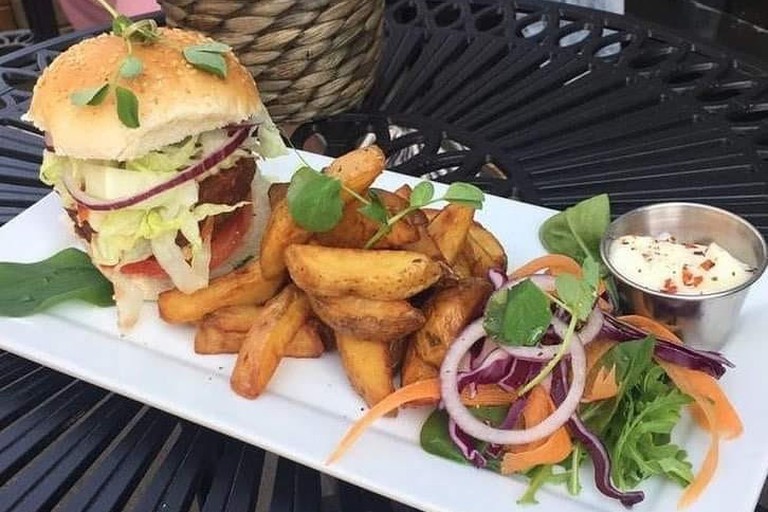 This funky vegan restaurant in Bruntsfield makes dishes that pop with colour, including its stack of ‘unicorn’ pancakes that are packed with superfoods like green-blue algae and purple goji berries. You can also come for dinner and enjoy falafel with a range of hummus, or their signature Beyond Burgers. By eating here, you are doing your part to help the environment, as Seeds For The Soul has a strong ethos on reducing pollution and waste.

This article was written by Caroline Young and is an update of a piece by Alex Mackay.