The 10 Best Scottish Restaurants In Glasgow

Renowned across the United Kingdom for its art scene, shopping and nightlife, Glasgow increasingly demands recognition as a booming culinary hub. Fast becoming the foodie capital of Scotland, Glasgow presents an eclectic mix of cuisines for the discerning traveler. The Culture Trip explores the prime cut of the Scottish restaurants in Glasgow, listing the 10 best places to enjoy some local flavors.

Open for 70 years, Rogano is proud to announce itself as the oldest surviving restaurant in Glasgow. After visiting, it is not difficult to see why it has been so successful. With a great central location, hidden off busy Buchanan Street and near the Glasgow Gallery of Modern Art, its distinctive nautical art deco interior, and a mouth-watering seafood-based menu, Rogano provides diner’s with an unforgettable experience. Push the boat out and pick the lobster thermidor or oysters Rockefeller.

A relative newcomer, opening in 2011, Wee Lochan’s name and cozy decor add warmth to a wide-ranging menu of sophisticated dishes. Based in the West End, the seasonal menu provides more than enough reasons to wander out from the center of town. Wee Lochan has a neighborhood feel, with locally made art and jewelry for sale. The friendly staff serve up Scottish specialties, such as Stornoway black pudding or seasonal lamb. For an authentic Glaswegian meal, Wee Lochan is highly recommended.
Wee Lochan, 340 Crow Road, Glasgow, G11 7HT, Scotland, +44 141 338 6606

A Glasgow legend since its opening in the 1970s, the restaurant, known to local’s simply as ‘the Chip’, offers a refined, modern spin on Scottish classics. Located in the picturesque Ashton Lane, the Ubiquitous Chip serves up delicious locally sourced food in a unique environment, with fauna and fairy lights creating the feel of a menagerie. In the warmer months seating on the cobbled street outside is also available. Boasting an excellent wine list along with sought-after fish and game options, the Chip never fails to live up to its iconic status. Booking in advance is recommended.
Ubiquitous Chip, 12 Ashton Lane, Glasgow, G12 8SJ, Scotland, +44 141 334 5007 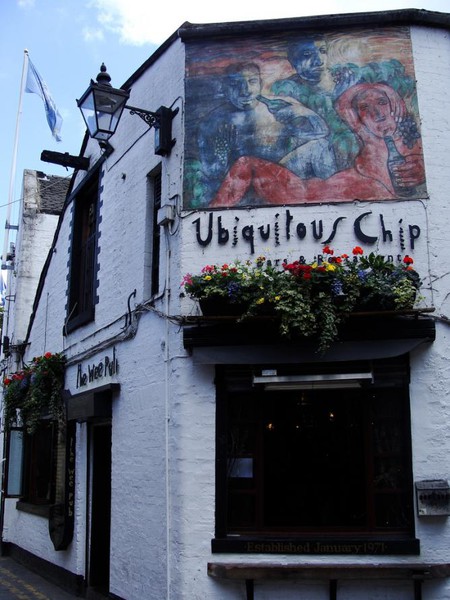 An award-winning and popular fixture on the West End culinary scene, Number 16 deservedly finds itself listed among the best restaurants in Glasgow. An ever-changing menu made up of locally sourced and seasonal produce offers up a delectable assortment of Scottish fare, often with an international twist. Though the menu changes daily, you might expect to find seared bavette steak or roast Gressingham duck on offer. The unassuming decor, open kitchen and informative staff provide a memorable dining experience.
Number 16, 16 Byres Road, Glasgow, G11 5JY, Scotland, +44 141 339 2544

Bistro, Restaurant, European, British, $$$
Facebook
Email
Twitter
Pinterest
Copy link
Share
Map View
The independent, family-run Black Sheep Bistro in the north of Glasgow is quickly making a name for itself as one of the best value dining options on offer in the city. Its popularity and charm ensures that it represents an attractive alternative away from the busy city center. The menu changes daily but always offers a wide choice. The menu places dishes such as Balmoral chicken stuffed with haggis alongside British classics like steak pie and mashed potato.
Open In Google Maps
10 Clarendon Street, Glasgow, Scotland, G20 7QD, United Kingdom
+441413331435
Visit Website
Give us feedback

The younger sibling, by 25 years, of the Ubiquitous Chip, Stravaigin has nonetheless been unafraid to break with the Chip’s winning formula. ‘Stravaig’, a Scottish word meaning ‘to wander’, embodies the culinary philosophy of the restaurant; ‘think global, eat local’. What this entails is a largely Scottish menu, influenced by a variety of cuisines from different countries and cultures, that brings novel combinations and fusions to the fore. The curry leaf ice-cream is a treat for the more adventurous customer.
Stravaigin, 28 Gibson Street, Glasgow, G12 8NX, Scotland, +44 141 334 2665

Launched in Glasgow’s trendy West End in 2006, Cail Bruich emphasizes its evolving seasonal menu and culinary innovation. The product of brothers Paul and Chris Charalambous, its success has been recognized with a number of awards including a Michelin Guide Recommendation in 2012/13. The delicious Scottish fare shown is complimented by a French influence, serving up Dornoch lamb to côte de bœuf. An unpretentious feel and excellent standard of dish combine to make visiting Cail Bruich a must in Glasgow.
Cail Bruich, 725 Great Western Road, Glasgow, G12 8QX, Scotland, +44 141 334 6265

Located in Finnieston, the up-and-coming food mecca of Glasgow, The Sisters has become the choice diner for the city’s premier music venue, the Hydro. With a modern but cozy interior and friendly service, the Sisters prides itself on both its Glasgow and family roots. Scottish cuisine is central, with delightful reinventions of traditional dishes. With homemade fare, locally sourced produce, and its now famous puff candy meringue, the restaurant and chef Jaqueline O’Donnell are rightly earning a reputation as big players on the Glasgow food scene. 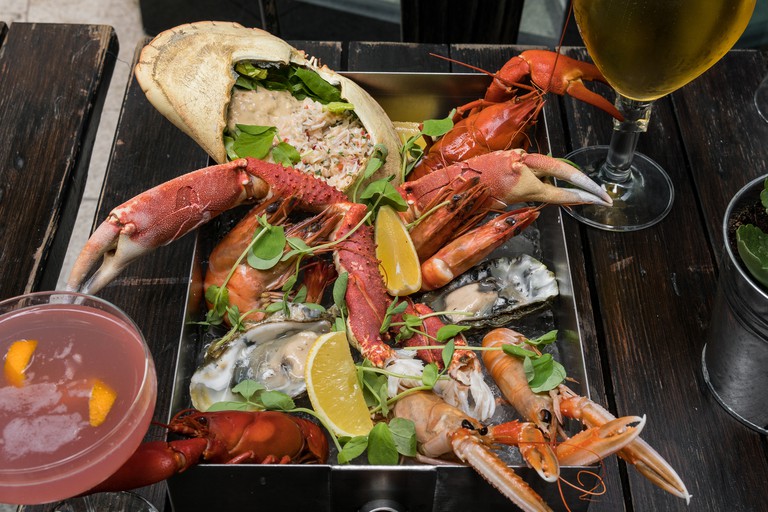 Since 2009, Crabshakk has established itself as a seafood staple in Glasgow. Also based in Finnieston, it maintains a core menu that keeps regulars coming back, as well as offering specials that change daily. Using the freshest produce, Crabshakk offers options from fruits de mer to the classic and ubiquitous Glasgow fish supper. A clever wine list compliments the menu perfectly. With a suave interior and warm service, its no-nonsense approach is a winner, though book early as it is a tight space. They also own Table 11, a relaxed and intimate oyster bar located on Argyle street.

With its intimate and friendly ambiance, Fanny Trollopes has been a staple of the Glasgow food scene for over 14 years. It is located in Finnieston, but pre-dates the area’s current culinary renaissance. Serving up a menu based on Scottish produce, although adding a distinct flair to traditional dishes, the restaurant has a rich personality to go along with the fare on offer. The cumin roast sweet potato with goat’s cheese, chili and coriander strudel is a must-have, although with the menu changing seasonally there will always be new options to whet the appetite.