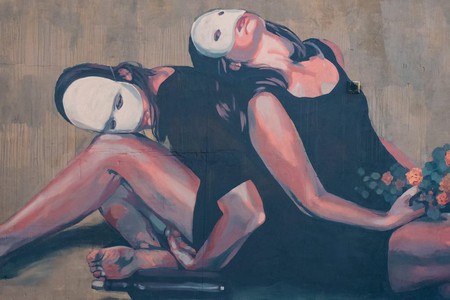 The silver buildings of Scotland’s Granite City are now awash with colour, having been painted in a new light by the artists visiting for the world-leading street art festival, Nuart Aberdeen. However, there are two particular murals that capture the mind’s eye and stir the soul – the ones that spotlight the women who died at the stake during the Scottish witch trials.

These murals are the work of Milu Correch, an Argentinian street artist adored for her large-scale masterpieces. Giant and contemplative, both pieces feature two women in reference to the witch hunts that plagued Scotland during the late 16th and early 17th centuries.

Correch, who resides and works in Buenos Aires, draws upon literature, women’s histories and film for inspiration. She branched into the field after taking a workshop by famed Argentinian muralists Lean Frizzera and Emy Mariani, which encouraged her to ‘upscale her notebook images’.

One such Aberdonian mural depicts two witches dressed in black with white masks smothering their faces as their bodies rest upon each other. 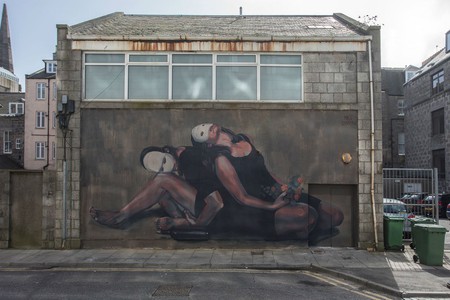 The second shows a further two witches on their knees exposed and naked with a cloth drenched over their heads. 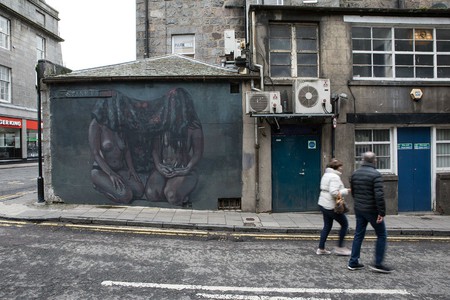 Although an unnerving facet of Scottish history, Correch – who is known to explore and anatomise so-called moral and aesthetic truths with an unflinching satirical stance – pays tribute to the women charged of witchcraft, most of whom endured brutal torture methods to elicit a confession.

Witches and healers were long regarded as acceptable society members until the late 16th century, when anyone practising magic, good or bad, was accused of having a pact with the devil. Approximately 80% of witchcraft cases in Scotland involved women. Records show that between 1596 and 1597, 45 women and only two men were charged in and around Aberdeen. Endless accounts exist of the many women tried and prosecuted in Aberdeen at the Tolbooth for ‘witchcraft, sorcery and other diabolical and detestable practices’. 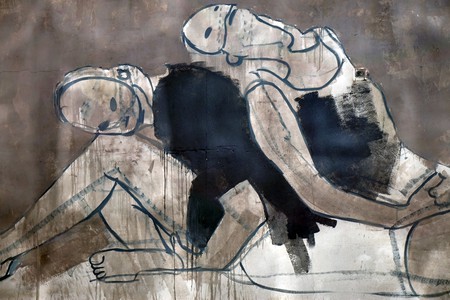 The Scottish Witchcraft Act of 1563 banned the use of ‘any manner of witchcraft, sorcery or necromancy’ and only exacerbated society’s intense magic phobia. The late 16th century witnessed Scotland’s first mass witch trial in North Berwick. The hysteria, in part, was spearheaded by King James VI, who blamed witchcraft for the harsh weather conditions and other difficulties endured (like the loss of an attendant ship) when trying to bring his wife back from Denmark. The king also proclaimed sorcery spanned all social classes and ages. Utterances of dark deeds like sexual encounters with the devil and animal sacrifices were amassed during the witch hunt torture sessions. Countless souls were strangled and burned at the stake. 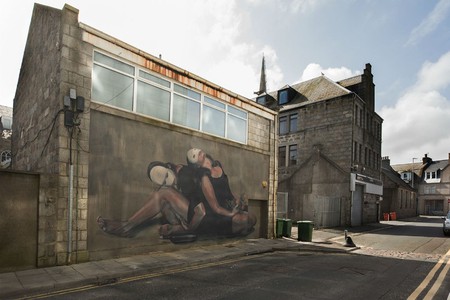 These compelling murals were crafted by Correch for Nuart Aberdeen, a new international platform for artists from all parts of the world to unite, create and inspire with a series of site-specific murals, installations, interventions and temporary exhibitions. This artistic celebration was brought to the Granite City by the makers of the internationally renowned Nuart Festival in Aberdeen’s twin city of Stavanger, Norway.

Martyn Reed, director and curator of Nuart, stated that ‘Street Art’s very existence, not to mention its popularity, is a reflection that we need to explore and promote alternatives to the prevailing status quo. Something Nuart has been dedicated to realising since its inception in 2001.’ 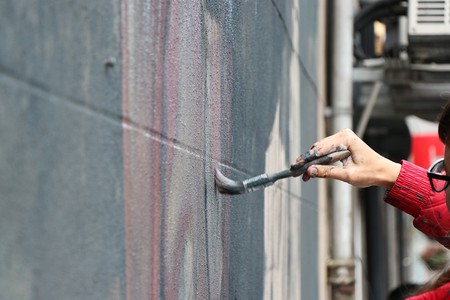 ‘Nuart Aberdeen takes a proactive stance in the democratization of art, not only through access and engagement but in the production of public art itself. It aims to act as a catalyst for individual and community development, agency and positive change.’

Delve deeper into Scotland’s burgeoning street art scene and check out the mural culture in Edinburgh and Glasgow.