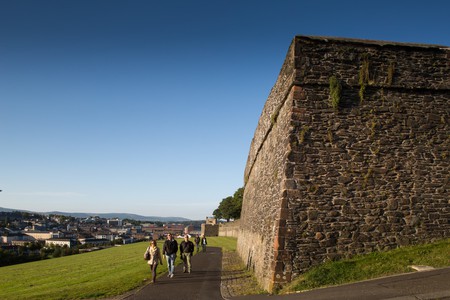 In Northern Ireland, the Israeli-Palestinian conflict is a surprisingly fraught issue. In NI, Irish Republicans, mainly Catholics, tend to stand with the Palestinians, while the mainly Protestant Loyalist community tends to sympathise with Israel. These allegiances are nothing new, but Northern Ireland’s second city has some unusual similarities to Jerusalem.

Irish Republicans have flown the Palestinian flag for many years, seeing similarities between Palestine and Ireland. In the 1970s, Palestinian fighters were actively supporting Irish Republicans during the Troubles. Meanwhile, Northern Ireland’s Unionist population tend to stand with Israel. When, in 2014, the British House of Commons voted on whether or not to recognise Palestine as a state, there were only 12 ‘no’ votes, five of which came from DUP members of parliament. (Sinn Féin didn’t vote in this, as they don’t take their Commons seats, standing on an abstentionist platform). Flags are ubiquitous territory markers, and it’s very common to see Palestinian flags alongside Irish tricolours, as well as Stars of David alongside Union Flags. 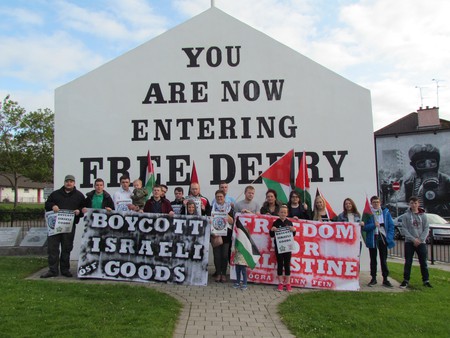 On the surface, both cities are beautiful, historic municipalities with iconic walls. Derry’s medieval city walls have never been breached, despite facing several sieges. In 1689, one particular attack by Catholic King James II lasted 105 days. Like Jerusalem’s, the walls are a reminder of the city’s past, but the similarities are more than surface level. The city is culturally very important to Unionists, and one of the major Loyalist organisations in Northern Ireland is The Apprentice Boys of Derry, dedicated to commemorating that 105-day siege. However, Derry remains demographically dominated by the Catholic community. Indeed, even its name is controversial. Its official name is ‘Londonderry’, the name favoured by the Loyalist community, whereas ‘Derry’ remains more common in colloquial use.

Both cities, Derry and Jerusalem, have seen their fair share of conflict. In 1972, the Bogside was the location of one of the worst atrocities of the Troubles, where British soldiers shot 28 unarmed protesters. In a sense, the city remains split. Like other Northern Irish municipalities, its neighbourhoods are fairly segregated; however, like other areas, these barriers are dissolving. In the mid-19th century, noted hymn-writer and Derry resident Cecil Frances Alexander, composer of ‘All Things Bright and Beautiful’, also composed ‘There is a Green Hill Far Away’. ‘There is a Green Hill…’ is ostensibly about Jerusalem, but its mentions of city walls and green hills undoubtedly call Derry to mind.

Derry viewed from one of those hills | ©2006 David Cordner www.davidcordner.com

In Derry, a pair of clergymen have united to write a book about forgiveness. Father Paul Farren is a Catholic priest whose diocese includes the Bogside, a staunch heart of Republicanism. Meanwhile, Archdeacon Robert Miller is in charge of three Anglican parishes. He lives in the west of the city, which many Protestants have left, citing intimidation as a major reason for their moves. Farren and Miller are firm friends and are primarily concerned with notions of forgiveness. Encouraging both sides of the conflict to sympathise with the other, their short work Forgiveness Remembers presents ways to process forgiveness without resorting to blanket forgiveness of any and all injustices. Rather, they suggest that injustices should not be ignored and that sometimes it is necessary for anger to come to the surface before people can work through it. However, they also recognise that the process of forgiveness can take years, working through resentment before moving on to pity and, eventually, to peace.