Why the Diverse London Borough of Brent Deserves More Recognition 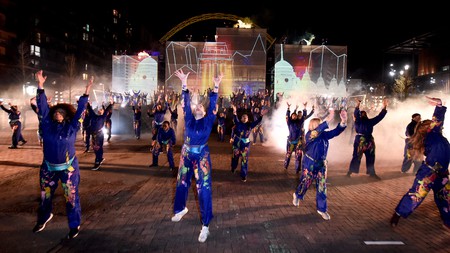 An outdoor performance to celebrate the launch of Brent’s year as London Borough of Culture 2020 hosted by Wembley Park takes place along Olympic Way in front of Wembley Stadium | © Eamonn M. McCormack/Getty Images

Coronavirus may have limited the opportunities to explore, for now, but as soon as restrictions lift, the first destination on your list should be Brent, London’s newly crowned Borough of Culture.

Famous faces such as George the Poet, Zadie Smith and Louis Theroux may have once called Brent home, but it’s the community, rather than individuals, that makes this borough so unique. It’s one of London’s most diverse areas; according to the last official census, there are 149 languages spoken in Brent, including Arabic, Gujarati, Portuguese, Somali and Romanian. The borough also has a large African-Caribbean community; many of the Windrush generation settled in the area, making it not only a thriving community, but a hotbed of creativity.

Brent is perhaps most notable as the place that introduced the UK to reggae. The legendary Trojan Records, which celebrated its 50th anniversary in 2018, set up shop there in the late 1960s. Laurence Cane-Honeysett has been with the imprint since 1990, getting his start by initially writing sleeve notes and putting together compilations; today, he’s the label manager and Trojan’s longest-serving employee. “It got records to number one in the charts,” Cane-Honeysett says, recalling the impact the label had on the UK’s music scene. “It was a small place in Neasden Lane, which they called Music House. You might argue had it not been for Trojan, no one would’ve heard of Bob Marley.”

Cane-Honeysett describes an area with a vibrant multicultural community that has yet to fall prey to gentrification. “It has changed but not dramatically,” he remarks. “It’s still the same demographic… It’s still a place that attracts multiculturalism. It’s a very multicultural, fascinating and authentic part of London, which thankfully hasn’t been destroyed or transformed by developments.”

It’s this multiculturalism that Harlesden resident and poet Rose Rouse cites as its beauty. Along with 10 fellow poets and typewriter illustrator Kiera Rathbone (who uses old typewriters to create art, building images from each mark the typewriter leaves), Rouse will be self-publishing a book of 10 poems about Willesden Junction station and the people who surround it as part of the London Borough of Culture competition.

“There are so many stories in Harlesden,” Rouse enthuses. “There’s a guy all the locals call Danny from Pakistan, who was selling boxing gloves from the place in Pakistan where he’s from. There’s a hairdresser there from Cyprus. There’s a little band down (Park Parade) and they call themselves the Originals because they came (to the area) about 40 years ago.” When asked why initiatives such as the London Borough of Culture are important, Rouse refers to how it brings people with different artistic leanings together, providing inspiration for further projects. “The local boroughs should be getting funds to support local centres, so artists can get together and create things,” she says. “Everything comes out of people meeting each other. It can create such brilliant initiatives.”

“It’s the vibrant community spirit that makes Brent super special,” says Chinapa Aguh. Along with Vee Ladwa, Aguh is part of the stop-motion animation duo Inanimatorz; both were raised in the borough and have fond memories of growing up on the multicultural streets. “It’s a real melting pot of cultures from Africa, Caribbean, India, Brazil, Poland and more,” Aguh explains, citing the colourful food markets selling unique ingredients from all over the world as one of the ways the borough serves its vast range of international inhabitants.

In light of the current global situation, Brent’s turn as the London Borough of Culture 2020 will be largely rescheduled, with many of the planned outdoor events and large celebrations happening in the summer of 2021. Justine Simons, OBE deputy mayor for culture and creative industries, released a statement saying, “it’s important that we all follow the government’s instructions to stay at home unless it is essential to leave. But we do not want Londoners to miss out on the amazing creative programmes that Brent, Lewisham and Croydon have planned, so that is why we have rescheduled our plans. We will work closely with artists, the boroughs and all those involved to ensure they are supported during these challenging times.”

Nevertheless, the accolade holds importance in the community. “Growing up, Brent’s reputation was poor with high crime rates and poverty in certain areas,” Aguh says. “It’s so important that Brent has been awarded the London Borough of Culture 2020 as now we can tell the real stories of the art and emotions that hold [the borough] together, shattering the stereotypes. It’s ensuring cultural activities do not die in Brent.”

Cane-Honeysett agrees. “It’s very easy to give it to someone posh like Westminster or Chelsea.” he says. “But that doesn’t tend to be where you get the energy that you get in areas that are a bit more deprived. (In these areas) there has always been that dynamic that will lead to creativity, which contributes to culture. I think it’s very important that we recognise places like Brent, because there is a large cultural contribution that was immensely important on a global scale.”