Views of London in 10 Artworks 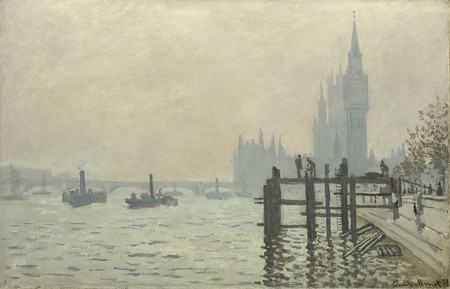 Claude Monet, The Thames below Westminster, about 1871 | © The National Gallery, London

London has always been a subject of fascination for artists, whether that be the beautiful views across the river, or the squalor of urban industry. Here are 10 of the best works of art that capture the essence of the capital at various points in history, from the riotous streets of Gin Lane, to the tranquil suburbs of Upper Norwood.

The bustling marketplace at Covent Garden was at the heart of the artistic community by the 1730s, with many artists fascinated by its diverse collection of sellers, visitors, produce and animals that all packed into the piazza every day. Nebot made two versions of this scene, one is on display at Guildhall Art Gallery while the other is at Tate Britain. 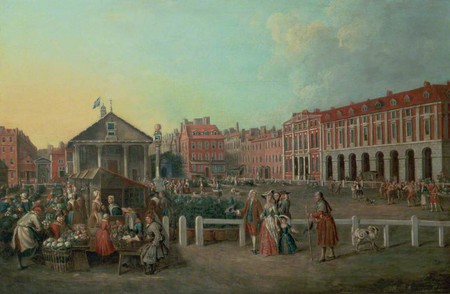 William Hogarth’s morality tales are known the world over, and none better than ‘Gin Lane’. This foreboding etching was designed as a counterpart to the rather more genteel subjects of ‘Beer Street’, as a way of warning the public about the evils of drinking the cheap spirit. The problem was so rife in the 1700s that the government issued the Gin Act in order to shut down unregulated gin shops. In this work a haggard woman lets her baby fall to its death, crowds fight in the streets, the pawn shop and funeral directors prosper and buildings crumble. 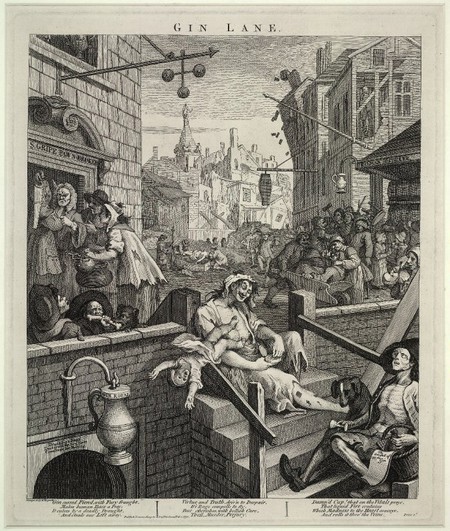 Turner’s low viewpoint suggests that he may have painted the bridge from the shore. As a young boy he was fascinated by the bustling industry of the Thames, but in this painting he seems to have a focused interest on the architecture of the bridge itself. He has taken great pains to replicate the Gothic arches, brickwork and curves of the balustrades, whereas the coachmen making their crossing are distinguished by a few sparse marks. This is a wonderful record of London’s urban infrastructure and Turner’s ability – as always – to capture the fluid transparency of water. 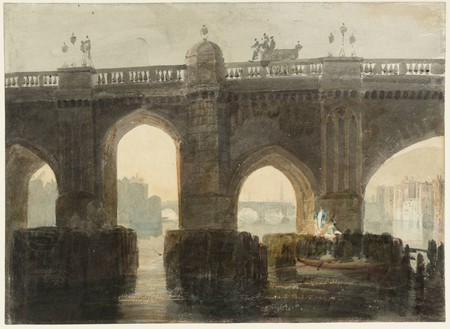 ‘The Thames Below Westminster’ – Claude Monet, 1871

During the Franco-Prussian war, London became a haven for Impressionists such as Pissarro, Daubigny and Monet, who took the river Thames and its neighbouring parks as his subject during his extended stay. This hazy view of the Houses of Parliament from the water’s edge places focus on the every day industry on the river. A jetty cast into shadow by the spring sunshine dominates the foreground, while working boats chug towards the bridge. This exercise in light and dark was central to Monet’s practice, and he would often paint the same site from life, many times over, in order to perfectly capture the scene’s natural state.

Claude Monet, The Thames below Westminster, about 1871 | © The National Gallery, London

Pissarro arrived in London in 1870 after fleeing the war. His studio in Louveciennes had been ransacked, resulting in only about 40 of over a thousand paintings being saved. Following this trauma he settled in Upper Norwood, a natural choice as he already had family nearby. This beautiful painting of the frosty London suburb conveys an air of content tranquility, with loose brushwork depicting the remains of recent snowfall, which mirrors the icy blues present in the sky. 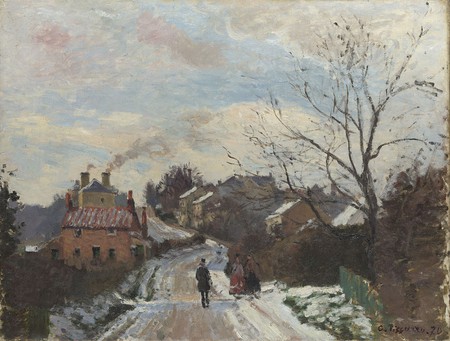 This night time scene, known as a ‘nocturne’ was one of several views Whistler made from memory in his studio, following many nights sketching on a boat in the middle of the river. He has deliberately exaggerated Chelsea Bridge’s proportions and the fireworks in the background call to mind Japanese artist Hiroshige’s ‘Moonlight at Ryogoko’ woodcut. This painting was central to the infamous Whistler vs Ruskin trial, where the artist sued the critic for his inflammatory remarks about this work (Ruskin took issue with the lack of moral purpose and accused the artist of copying JMW Turner’s subject matter). The hearing saw figures from across the art world debate the meaning and value of art, but ultimately Whistler won, but was only awarded a farthing in damages. 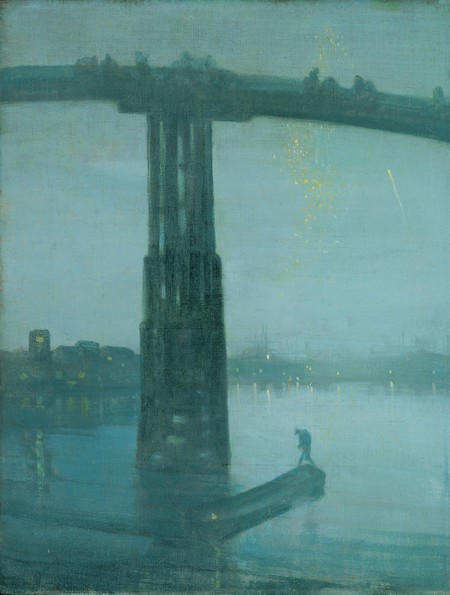 As the only British man (born in Paris, to English parents) to be ranked among the Impressionists, Alfred Sisley proved his worth with beautiful landscape paintings that embody a kaleidoscope of colour informed by natural light. During a trip to London in 1974, he only depicted one scene in the centre of the city. This painting is bathed in soft pastel hues that make the Thames seem almost exotic, as if it is in fact a shoreline depicted on a Mediterranean evening. Look carefully to spot the dome of St Paul’s Cathedral outlined against the pinkish sky.

On evening in 1940, Henry Moore took shelter from an air raid in Belsize Park. During the Blitz, Londoners were encouraged to hide in underground stations, and people would often stay huddled for hours. The experience of seeing so many frightened people camping out together had a profound affect on Moore, and he made several drawings from memory. Kenneth Clark – who was the chairman of the War Artists Advisory Committee at the time – was so moved by the works that he commissioned Moore to create an additional series, and appointed him an official war artist. 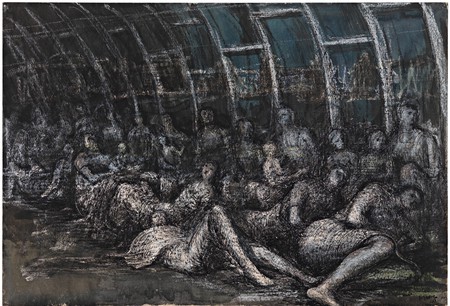 Henry Moore, Shelterers in the Tube, 1941 | Reproduced by permission of The Henry Moore Foundation

Lowry didn’t paint many pictures of the capital, preferring instead the industrial cities of the North. However he was compelled to record the gargantuan power station at Deptford, capturing the realities of urban life as opposed to romantic visions of famous landmarks, as seen from across the river in Greenwich. The bleached sky bleeds into the similarly anaemic river, calling to mind the dull light typical of British weather. He has also favoured a desolate scene with almost no human presence, instead giving focus to the dark dockyard and thick black smoke pouring from the station’s chimneys.

Over the course of two years, Rachel Whiteread recorded the demolition of three high rise council blocks in Hackney, where she lived. The destruction of social housing and the level of poverty in the area informed her work throughout the nineties, and she gained notoriety for her concrete cast of the interior of a house in nearby Bow. Her documentary-style series were designed as a memorial to ‘something that is going to be completely forgotten… the detritus of our culture’. The image of Clapton Park Estate shows the exact moment when one tower implodes, dwarfing the low rise houses next door and covering the area in an eerie smoke cloud. 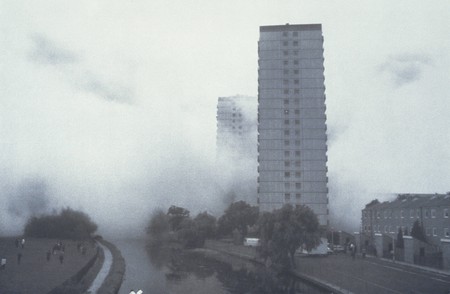