The Unsung Heroines of London's 'Golden Age' of Poster Design 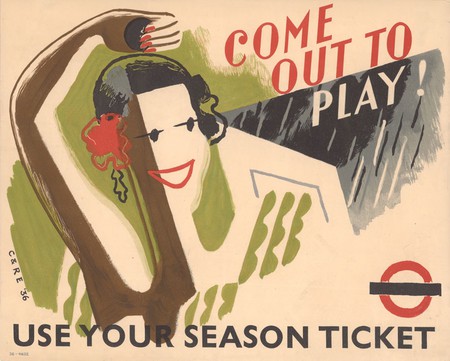 Come out to play, by Clifford Ellis and Rosemary Ellis, 1936 | Courtesy of London Transport Museum

While the London Underground has long celebrated its association with pioneering artists, it is not widely acknowledged that many of the original poster designs were created by women. At least 170 female artists were known to be commissioned since 1910 and it’s likely many more contributed. The Poster Girls exhibition at the London Transport Museum puts the work of these talented design heroines centre stage for the first time as the centenary of votes for women approaches in 2018.

The exhibition aims to look at poster design through a different lens, focusing on the talented female designers and makers behind the posters, rather than the women who are primarily depicted as passive consumers in the posters themselves. While Poster Girls covers an entire century, looking at the ‘Golden Age’ of the 1920s and 1930s is especially interesting. This was an exciting time for women, and the capital in general. Rradical changes were being made to the London transport system and there was a shifting social scene – women were gaining more independence than ever after World War I. 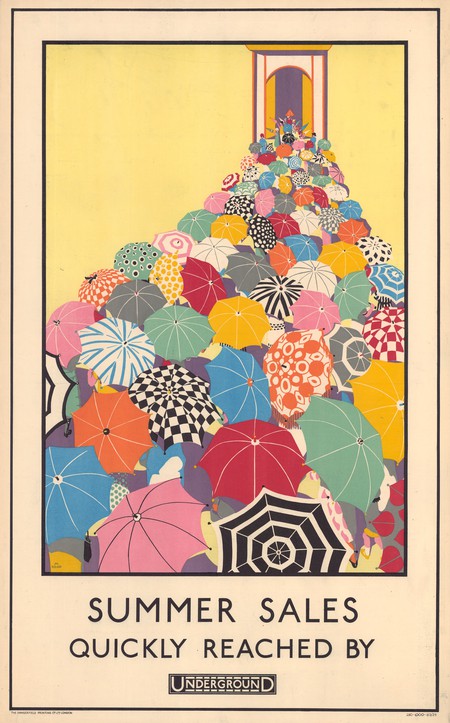 Women over the age of 30 were able to vote by the end of 1918, the Sex Disqualification Act of 1919 meant more women could go to university and have better job prospects – colleges were taking on more female designers, especially the Central School of Arts and Crafts, which played a significant role in nurturing female design talent during the 1920s and 1930s.

The school was at its most productive during this era, with lead artists of the time Dora Batty, Margaret Calkin James, Betty Swank and Herry Perry all attending alongside a relatively equal number of male poster designers. The institution had a unique relationship with the Underground, sharing professional networks with Frank Pick, who became responsible for the Underground’s publicity in 1908. 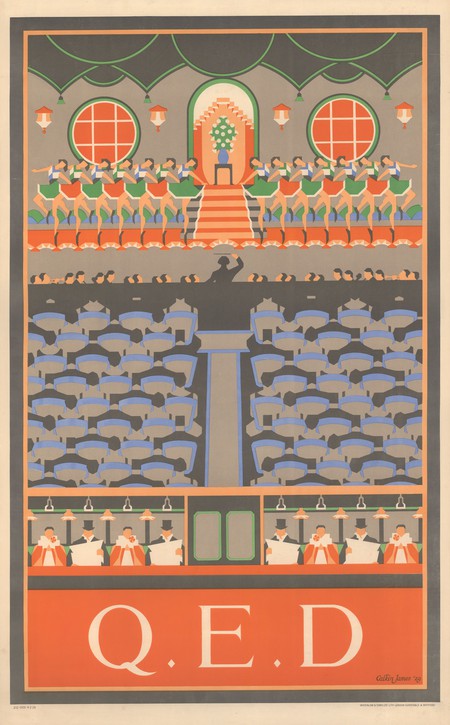 Pick was a forward-thinking and enlightened manager who did not discriminate based on gender – he chose artists based purely on their talent and on their power to entice Londoners to use the Underground not just for business, but for pleasure, which became increasingly important for revenue.

Pick commissioned the first female poster designer, Ellen Coates, in 1910 to create a poster for the Underground Group’s tram network. In 1922 the Central School won a commission to design posters for the LCC Tramways, which was a golden opportunity for budding designers like Freda Beard, who were often given their first commission under the scheme.

Just as little is known about Ellen Coates, in the early days, a lot of female artists remained under the radar with many of their works going unsigned – one such talented designer was Miss Bowden, who perfectly depicts an archetypal rainy grey day in London in 1917, persuading commuters to seek sanctuary in the underground system with a simple ‘Travel Underground’ slogan. 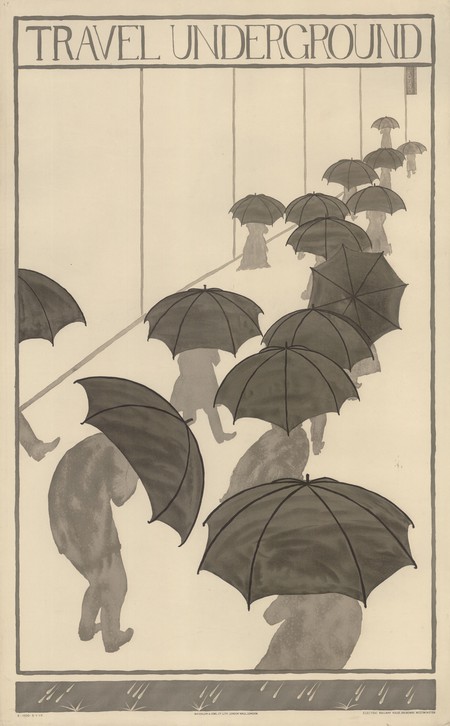 But not everyone was so obscure – pioneering designer Nancy Smith was revered for her bold use of block colour and simplified graphic forms during the 1910s, which was rather unconventional compared to her contemporaries’ illustrative style. Smith’s work was regularly shown in reputable galleries among the work of leading male poster designers at the time. Her Epping Forest poster has a clear art nouveau style that references traditional Japanese woodblock prints, yet it is reflective of the modern trends in poster design. 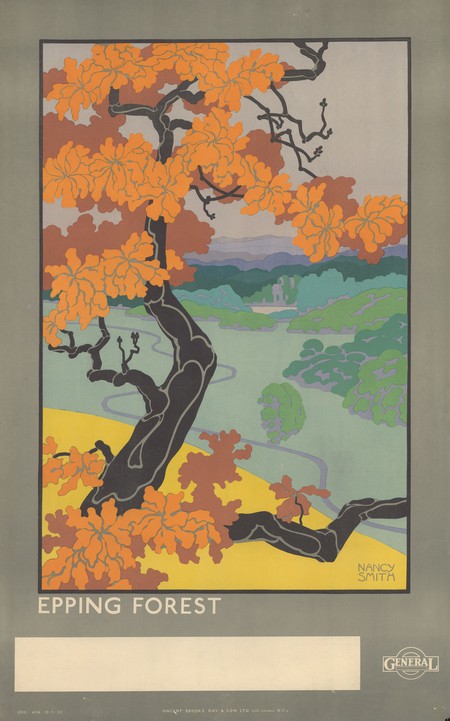 Women weren’t just given traditionally ‘feminine subjects’ to illustrate either – many of Pick’s commissioners were designing posters that covered topics generally considered to be very masculine, such as Anna Katrina Zinkeisen’s 1934 Motor Show poster, or the designs of Sybil Andrews. Andrews worked alongside the famous Cyril Power and signed her work Andrew Power to acknowledge the collaboration. Her Epsom Derby and Wimbledon posters have a real dynamism and sense of movement that portray her signature modernist style. 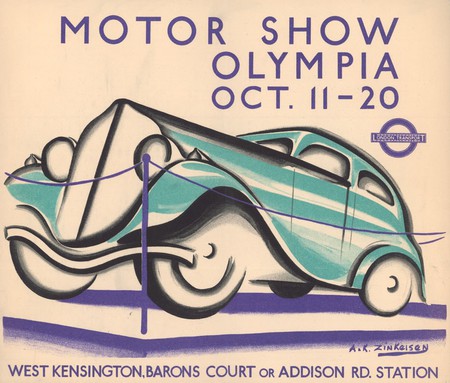 The way women are portrayed in posters during this time is interesting, too. Women had to support themselves and find a new way of living after the carnage of World War I, which left many either widowed or unmarried. As a result, women became more independent and are depicted as such, travelling for their own pleasure without a husband by their side.

Doris Zinkeisen’s At The Theatre hints at this social shift by portraying two confident female friends at the front of the box, while a man can only just be made out in the background, standing in the shadows. Clifford and Rosemary Ellis’ 1936 poster Come out to Play also shows a woman enjoying herself yet the message is more ambiguous – while she might be considered part of the entertainment, she could equally be seen as a fashionable, modern woman who has gone out on the town for a night of dancing. 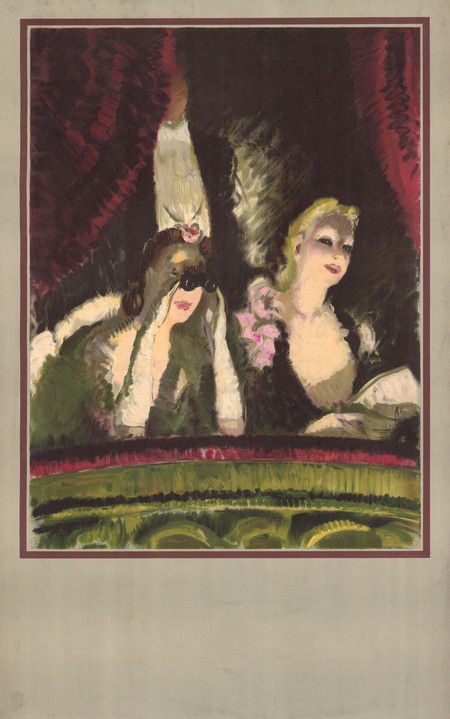 At the Theatre, by Doris Zinkeisen, 1939 | Courtesy of London Transport Museum

What is clear about this golden era of poster design is the vibrancy and optimism it exudes, yet sadly this era of independent women didn’t last. World War II hit London hard and its effects during and after are evident throughout the exhibition. Barely any female designers worked during this time, and even after the war, the posters of the 1950s have a more subdued tone, both in colour and sentiment. The designs feel more conventional in comparison to the radical and bright designs of a few decades earlier, returning to a more illustrative style. An example of this is London’s Open Air, designed by Mona Moore in 1948 who was known for her work for the War Artists Advisory Committee. The poster returns to the more traditional subject of nature without any human element – rather similar to the poster designs of the 1910s – yet there is a mention of the ‘time of the new leaves’, which hints at a quiet optimism and hope for the future.

Come out to play, by Clifford Ellis and Rosemary Ellis, 1936 | Courtesy of London Transport Museum

Regardless of the prominence or absence of women in these posters, or even how they are portrayed, this exhibition is important in highlighting the huge contribution these female artists made to 20th-century poster design, which has previously gone unrecognised. This is a stand-alone, world-class poster exhibition that does not suffer one bit for the lack of pieces from the featured artists’ male contemporaries.