The Top Theatre Pubs In London

Often significantly cheaper options than their bigger counterparts, these London theatre pubs certainly don’t skimp on quality, with many of the biggest names in entertainment getting their start on London’s pub theatre circuit, from actors Hugh Grant and Alan Rickman to Oscar and Olivier Award-winning directors. Here’s our pick of the best London has to offer.

Founded in 1980, the Finborough is a 55-seat venue above a Brompton pub, celebrated by theatre critics for its staging of new British writing (both plays and musical theatre) as well as neglected masterpieces from the 19th and 20th centuries. Over its lifetime, it has won countless awards, including the Pearson Playwright’s Bursary an incredible nine times. Neil McPherson, artistic director since 1999, has been consistently lauded for his work, being named Best Artistic Director in the 2009 Fringe Report Awards and the 2011 and 2012 Off West End Awards.

Despite being completely unfunded, the Finborough enjoys success to rival, and, indeed, overshadow, larger, bursary-receiving venues, with its productions regularly being transferred to the West End or toured around the English-speaking world. A number of acclaimed writers have had their work presented on the small stage, including the premiere of Naomi Wallace’s The War Boys;the world premiere of Anders Lustgarten’s BNP-themed play A Day at the Racists;the UK premiere of The Woods by Pulitzer Prize-winning David Mamet; and Mark Ravenhill’s infamous Shopping and Fucking, which was developed in partnership with the Finborough. In the 1980s, household names in comedy and literature graced the stage, including Jo Brand, Ainsley Harriott, Benjamin Zephaniah and Rory Bremner, who made his first public appearance here aged 21. 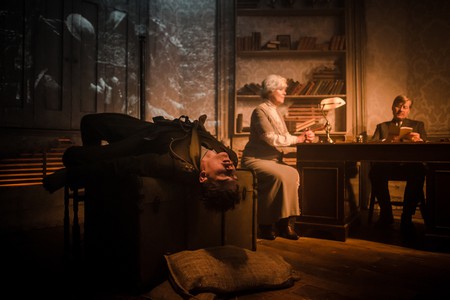 ‘It is Easy to be Read’ by Neil McPherson at The Finborough, first performed June 15th 2016 | ©Scott Rylander/Finborough Theatre

With 75 seats, the Gate Theatre can house a bigger audience than many other venues on this list but remains one of the smallest in size. Originally incarnated as Covent Garden’s Gate Theatre Studio – a small theatre established in 1925 and known for staging the British premieres of foreign works before it was destroyed in 1941 during The Blitz – the new Gate Theatre opened above the Prince Albert pub in Notting Hill in 1979. With the dominant tone of British theatre in the ’70s and ’80s being inwardly British, founding Artistic Director Lou Stein sought to provide a platform for international work in the spirit of its predecessor, particularly from across the European continent. Notable alumni from the Gate include Stephen Daldry, the Oscar-winning director behind Billy Elliot and The Reader, and Carrie Cracknell, who has recently gone on to be the associate director at The Young Vic and the Royal Court. 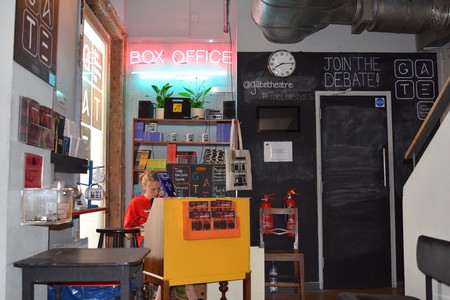 The pub below this theatre is one of the oldest in London, having been built in 1415 when Islington was still open countryside – it can be seen in the background of William Hogarth’s painting, Evening. The theatre on the first floor, known as the Old Red Lion Theatre Club, opened in 1979. Popular West End production The Play That Goes Wrong, currently showing at The Duchess Theatre and which won Best New Comedy at the 2015 Laurence Olivier Awards, premiered here in 2012 – three other Old Red Lion productions have been transferred to the West End, and several more have been picked up off-Broadway. Well-known people to have worked with the theatre include Royal National Theatre director Katie Mitchell (Women of Troy), playwright and screenwriter Abi Morgan (Suffragette, Shame) and actor/director Kathy Burke (Absolutely Fabulous, Tinker Tailor Soldier Spy). The Old Red Lion is also a popular stomping ground for celebrities such as Jude Law, John Hurt, and the cast of Game of Thrones. 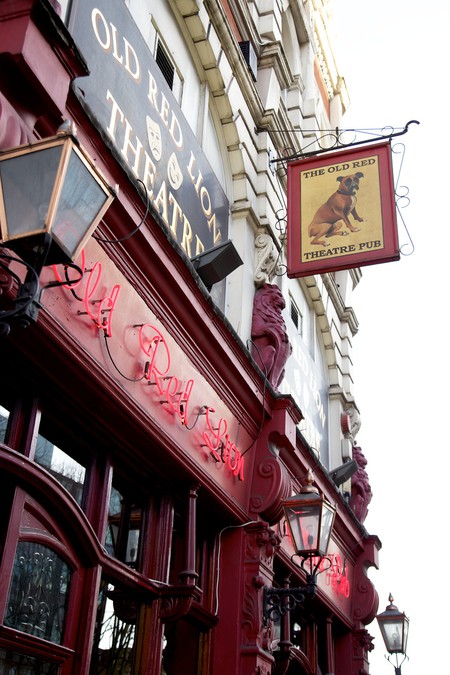 Courtesy of The Old Red Lion

Straddling the boundary between Islington and Hackney, this 67-seater studio theatre is housed in a former Victorian music hall, known to have played host to legendary entertainers Marie Lloyd and Little Titch, with Charlie Chaplin rumoured to have performed here. The theatre pub’s name is inspired by The Levellers, a radical left-wing group who held meetings nearby in the 1640s and who wore sprigs of rosemary in their hats. The Rosemary is London’s first multi-media pub theatre and has presented new work in opera and British film, as well as hosting art exhibitions. After 20 years under the helm of co-founders and artistic directors Cecilia Darker and Cleo Sylvestre, this June saw the Rosemary taken over by young theatre company Unattended Items, founded by Genevieve Taricco and Scarlett Plouviez Comnas just last year. 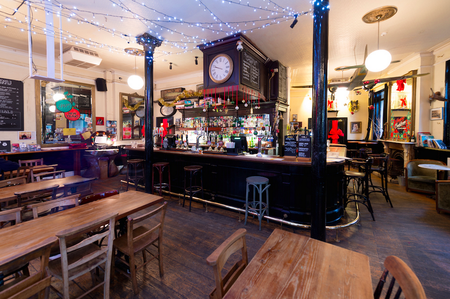 Courtesy of The Rosemary Branch Pub and Theatre

Upstairs at The Gatehouse, Highgate

Music Venue, Theatre
Facebook
Email
Twitter
Pinterest
Copy link
Share
Map View
At 446-feet above sea level, Upstairs at The Gatehouse is proud to be London’s ‘top’ theatre. The Gatehouse pub has been used as a meeting room and courtroom in its long life and seen the likes of Byron, Cruikshank and Dickens pass through its doors. The auditorium upstairs dates from 1895 and has been, at various points in its life, a music hall, cinema, Masonic lodge and a jazz music club played at by Paul Simon of Simon and Garfunkel in the ’60s. A mix of theatrical productions, cabaret, new musicals and modern adaptations of famous operas contribute to the theatre’s eclectic programme.

London’s first theatre pub since Shakespearean times and the second oldest in the UK, Islington’s King’s Head Theatre has been going since 1970, having been established in a back room of the King’s Head pub previously used as a boxing ring and pool hall. Though its home building dates to the Victorian times, a pub has been on the same site since 1543.

From its list of credits featuring classic and contemporary musicals, theatre and stand-up comedy, numerous productions have been transferred to the West End and Broadway. The King’s Head also boasts an incredible number of high-profile names amongst its alumni, including Kenneth Branagh, Dawn French, John Hurt, Ben Kingsley and Victoria Wood. It has also helped launch the careers of stars such as Hugh Grant, Steven Berkoff and Alan Rickman, with Joanna Lumley numbering among its patrons. 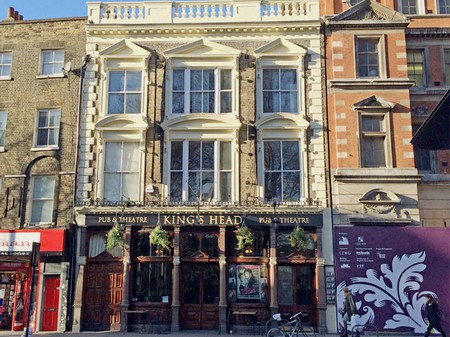 Tucked away in a pretty mews courtyard close to Islington’s Caledonian Road sits this twin to Pleasance Edinburgh, one of the most important venues at the Edinburgh Fringe Festival. Attached to an equally elegant restaurant and bar, Pleasance Islington is perhaps not strictly a pub theatre in the full sense of the word but is simply too charming not to include. Since its opening in 1995, this small Islington venue has become the preeminent London fringe venue during the Edinburgh festival, making a name for itself as a platform for talented newcomers and established names alike, with eclectic theatre in an intimate setting. Pleasance has also hosted some top names in comedy, including Russell Brand, Adam Hills and Micky Flanagan. 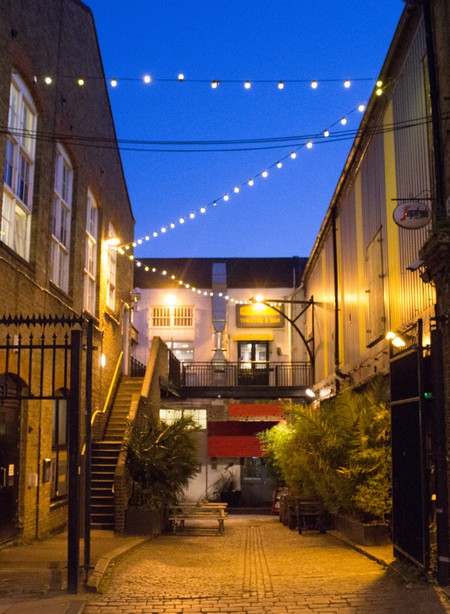 Theatre 503 | Courtesy of Theatre503/The Latchmere
Formerly the Latchmere Theatre, the Olivier Award-winning Theatre503 is driven by a sense of fair play as represented by its open submissions policy – every year they receive 1,500 submissions and claim to read them all. Dennis Kelly, who co-wrote Matilda the Musical and the Channel 4 drama series Utopia, recently joined the Board of Directors. As a man who had his first play produced by the theatre back in 2003, Theatre503 claim this illustrates their philosophy of drawing together established writers and unknowns. New plays by first-time writers remain their forte, but twice a year comes their ‘Second Look’ programme, in which the theatre revives a ‘groundbreaking but overlooked’ play from the ’80s and ’90s, while a third programme, named ‘Playwright Presents’, sees esteemed playwrights selecting plays written by upcoming talent. The Guardian has called Theatre503 ‘arguably the most important theatre in Britain today’. 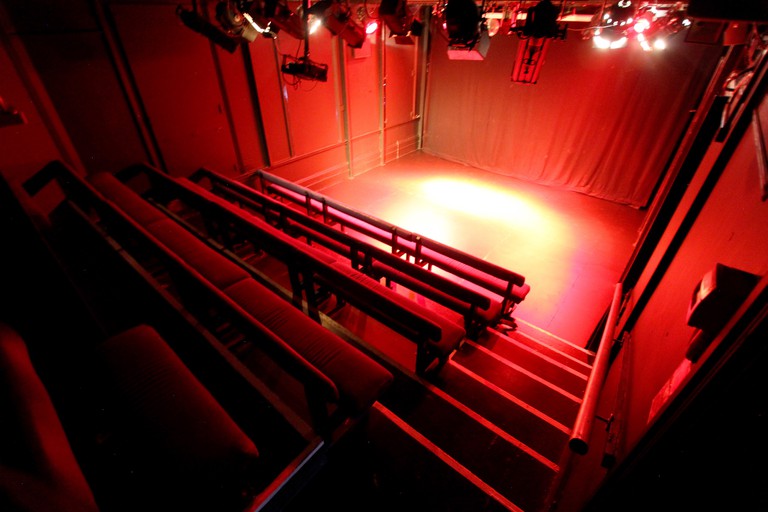 THE ETCETERA THEATRE, Camden - interior picture by Robert Piwko / www.robertpiwko.com www.facebook.com/RobertPiwkoPhotography www.twitter.com/robertpiwko | © Robert Piwko/Etcetera Theatre
Amongst the best known of London’s pub theatres, Etcetera Theatre is one of the smallest with only 42 seats. Despite this, it has a long track record of transferring productions to some of the biggest theatres, including the Royal Court, the Arcola, Trafalgar Studios, the Bush and Battersea Arts Centre, and is a key venue in August’s Camden Fringe Festival and the London Horror Festival. Etcetera Theatre has staged the premieres of work by some of the most prolific names in theatre, including The Westwoods by Alan Ayckbourn, Blue Jam by Chris Morris and Kafka’s Dick by Alan Bennett (writer of The History Boys), which he rewrote exclusively for the theatre. Alongside theatrical productions, Etcetera also has a strong record for introducing new comedy and has welcomed some of the biggest names in comedy to its boards, including Simon Amstell, Bill Bailey, Al Murray and Mark Thomas.

Bar, Pub, European
Facebook
Email
Twitter
Pinterest
Copy link
Share
Map View
Unique on this list for its location in a basement below West London’s The Curtains Up pub, this 57-seater venue specialises in a programme of short-run plays and afternoon magic shows. Their theatrical productions demonstrate a negotiation between revivals of classics, including recent runs of Dostoyevsky’s Crime and Punishment and Hardy’s Tess of the d’Urbervilles, and new work, with a roughly 70/30 split respectively. With seats surrounding the tiny stage on all three sides underneath three rounded stone archways, Barons Court provides an intimate and enveloping theatre experience.
Give us feedback