The 8 Oldest Churches in London 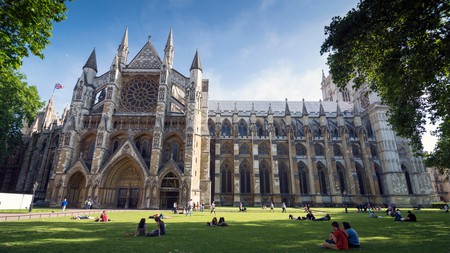 High on the list of cities to visit when it comes to history, London is full of architecturally intriguing churches and cathedrals – some even dating back to the first millennium. Here are the eight oldest.

Packed with fascinating stories of eras past, the historic churches of the British capital have been witness to some of the most tumultuous periods of London’s history – from the Great Fire of London in 1666 to the Blitz in the Second World War. To explore the oldest churches in London is to truly step back in time. Just be sure to look out for some familiar movie locations – and some famous (buried) residents.

All Hallows by the Tower 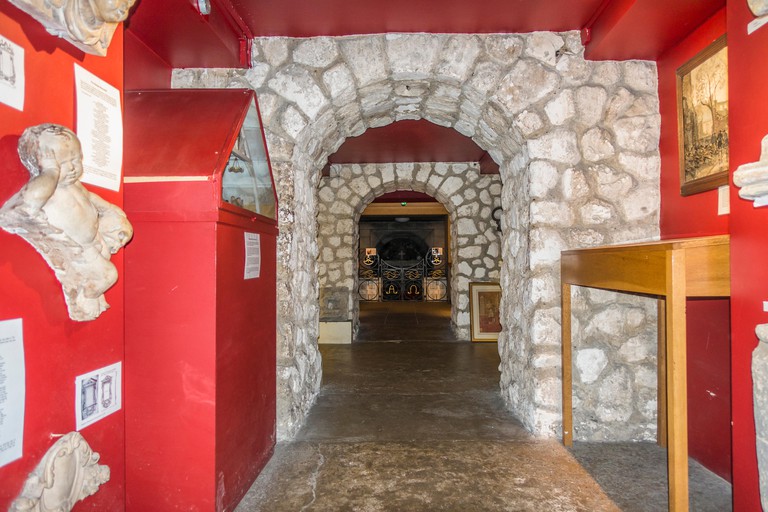 © Bax Walker / Alamy Stock Photo
One of the highlights of a visit to All Hallows by the Tower is undoubtedly exploring the Crypt Museum underneath the original Saxon building, which houses Roman and Saxon artefacts, along with ancient registers dating back as far as the 16th century. Billed as the City of London’s oldest church, All Hallows by the Tower was founded by the Abbey of Barking in 675 and, thanks to its proximity to the Tower of London, enjoyed a rather macabre purpose: this was where beheaded bodies from the Tower of London were brought to be buried, including Thomas More in 1535, after refusing to acknowledge King Henry VIII as head of the Church of England. On a happier note, the sixth President of the United States, John Quincy Adams, married here in 1797. The nearest underground station to All Hallows by the Tower is Tower Hill.
Open In Google Maps
Byward Street, Tower, London, England, EC3R 5BJ, United Kingdom
+442074812928
Visit Website
Give us feedback

Church
Facebook
Email
Twitter
Pinterest
Copy link
Share
Map View
Famed as the resting place of diarist Samuel Pepys, St Olave’s Church, Hart Street, is one of the few medieval churches to have survived the Great Fire of London in 1666. Indeed, Pepys is largely credited with saving St Olave’s from the fire by ordering the pulling down of wooden buildings close to the church. Pepys is now buried in the nave of the church, while an ornate memorial to him marks the location of a former outside stairway that he had added from the Royal Navy Offices, allowing the diarist and naval administrator to go to church without getting wet in the rain. Dating from 1450, the church’s exterior is built in rather modest Perpendicular Gothic style, but be sure to look out for the grisly entrance arch to the churchyard, adorned with skulls, which was added in 1658. St Olave’s is within walking distance of the Tower Hill tube station and the Fenchurch Street railway station.
Open In Google Maps
8 Hart Street, Tower, London, England, EC3R 7NB, United Kingdom
+442074884318
Visit Website
Give us feedback 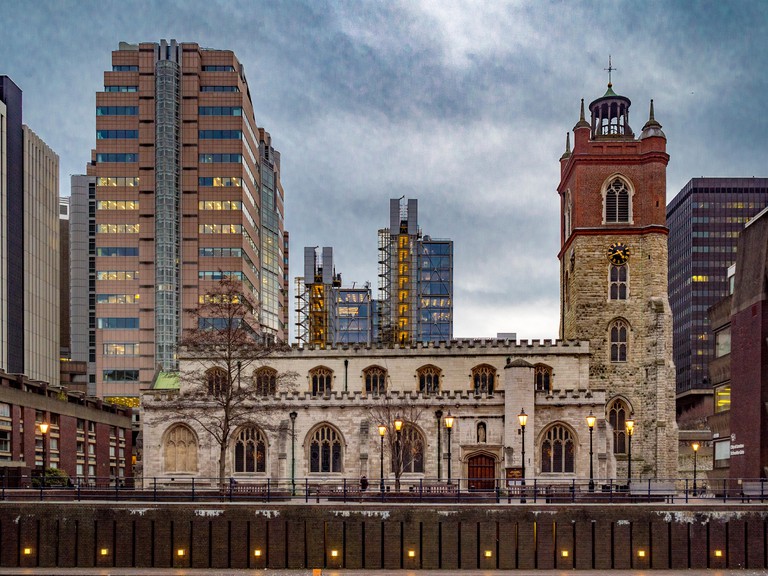 © Bailey-Cooper Photography / Alamy Stock Photo
Founded in 1394, St Giles-without-Cripplegate is now set within the Barbican, an iconic London landmark known for its brutalist architecture. Far from brutalism in style, however, the church is one of very few medieval churches to be found in the City of London, having survived the Great Fire of London in 1666. Preceded by a Saxon church and then a Norman one (both built in the 11th century), the church was rebuilt in the perpendicular gothic style in 1394. Though the church was severely damaged during the Blitz in the Second World War, the crenellated medieval shell and tower miraculously remained intact. The church we see today was restored according to a 1545 plan, drawn up after the church survived yet another fire – so it’s safe to say that St Giles-without-Cripplegate is among London’s most resilient churches. The Anglican church is dedicated to St Giles, patron saint of lepers, beggars and disabled people. The nearest tube stations to the church are Barbican and Moorgate.
Open In Google Maps
Fore Street Avenue, Barbican, London, England, EC2Y 8DA, United Kingdom
+442076381997
Visit Website
Give us feedback

Church
Facebook
Email
Twitter
Pinterest
Copy link
Share
Map View
Now home to a vibrant evangelical Anglican church, St Helen’s is nicknamed the “Westminster Abbey of the City”, owing to its exceptional collection of monuments, which include recumbent figures, altar tombs and ornate carved panels. Dating from 1210, when a priory of Benedictine nuns was founded there, the church was divided – with half the building for the nuns and half for parishioners – until the priory was dissolved in 1538. The church survived both the Great Fire of London and the Blitz, and although it sustained considerable damage by two IRA bombs that were set off nearby in 1992 and 1993, it has since undergone a complete restoration. Among the church’s most famous parishioners was none other than William Shakespeare, who lived in the area in the 1590s. The nearest underground station to St Helen’s is Liverpool Street.
Open In Google Maps
Great St Helen's, Lime Street, London, England, EC3A 6AT, United Kingdom
+442072832231
Visit Website
Give us feedback 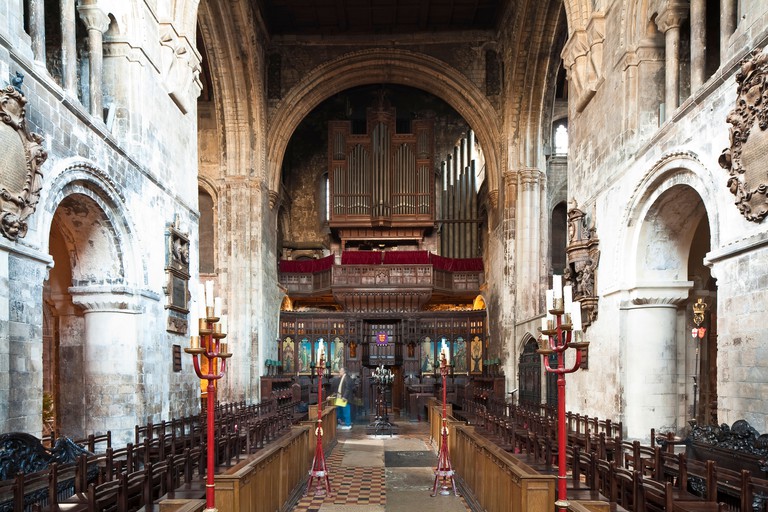 © Hemis / Alamy Stock Photo
London’s oldest parish church, St Bartholomew-the-Great was founded in 1123 as a priory. After the Dissolution of the Monasteries during the reign of Henry VIII, the building was used variously as a stable and factory, before reverting once again to use as a church in the 19th century. The surviving Norman chancel and apse represent some of the best Norman architecture found in Greater London today, with the Romanesque interior providing quite a contrast to the mishmash of the building’s exterior, born of various restorations. The church may look familiar to movie fans, as it has served as a backdrop to Four Weddings and a Funeral, Robin Hood: Prince of Thieves and Shakespeare in Love, among other films. The nearest underground station to St Bartholomew-the-Great is Barbican.
Open In Google Maps
Cloth Fair, Barbican, London, England, EC1A 7JQ, United Kingdom
+442076000440
Visit Website
Give us feedback

Church
Facebook
Email
Twitter
Pinterest
Copy link
Share
Map View
Built by the Knights Templar in 1185, the Temple Church is one of only four Norman round churches still operating in England, with its round nave modelled on the Church of the Holy Sepulchre in Jerusalem. Though the church went through substantial restoration in the 1840s, and was previously refurbished under Sir Christopher Wren following the Great Fire of London (despite not sustaining damage from the fire), the church today remains an excellent example of Gothic-Romanesque architecture. The nearest tube stations to the Temple Church are Temple and Blackfriars.
Open In Google Maps
Temple Holborn, London, England, EC4Y 7BB, United Kingdom
+442073538559
Visit Website
Give us feedback

Bridge, Building, Cathedral, Market
Facebook
Email
Twitter
Pinterest
Copy link
Share
Map View
Southwark Cathedral is fascinating not least for its architectural diversity, which includes elements of Early English, Decorated, Perpendicular Gothic and Victorian Gothic revival styles, along with remnants of the original Norman monastery founded in 1106. It was a parish church following the Dissolution of the Monasteries and became a cathedral in 1905. Inside, look out for a statue of William Shakespeare (whose brother, Edmund, was buried at the church) alongside a tablet dedicated to Sam Wanamaker, founder of the present Globe theatre nearby. The nearest underground station to Southwark Cathedral is London Bridge.
Open In Google Maps
London Bridge, London, England, SE1 9DA, United Kingdom
+442073676700
Visit Website
Give us feedback 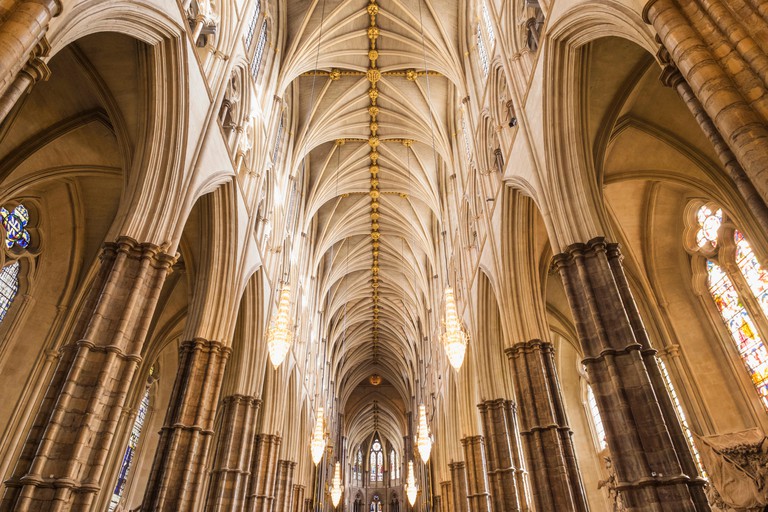 © Prisma by Dukas Presseagentur GmbH / Alamy Stock Photo
Book Now
Undoubtedly one of London’s most loved and photographed landmarks, Westminster Abbey was founded in 960, but construction of today’s Gothic building began in 1245 under Henry III, who pulled down part of an existing 11th-century abbey founded by King Edward the Confessor in 1065. Since the coronation of William the Conqueror in 1066, all coronations of English and British monarchs have been held at Westminster Abbey, and it has been the site of 16 royal weddings. Famous names to have been buried in Westminster Abbey include Queen Elizabeth I, Geoffrey Chaucer, Alfred Tennyson and Neville Chamberlain. The nearest tube stations to Westminster Abbey are Westminster and St James’s Park.
Open In Google Maps
20 Dean’s Yard, Westminster, London, England, SW1P 3PA, United Kingdom
+442072225152
Visit Website
Give us feedback