The Most Famous Hotels in London 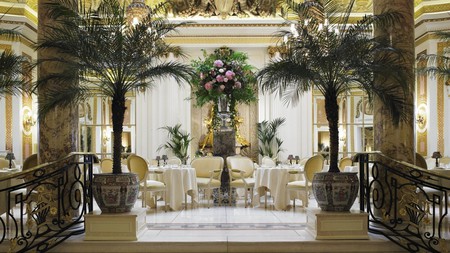 Afternoon tea at the Ritz, celeb-spotting at Chiltern Firehouse, or glamming it up at Claridge’s – many of London’s hotels are world-famous. Here’s our pick of illustrious properties that will guarantee a memorable stay in the capital.

Royal residences, historic landmarks and famous film locations lurk on almost every corner of central London; and in one of the world’s most recognisable cities, there are plenty of places to stay with equal prestige. Perhaps you’re after somewhere with Hollywood’s seal of approval, or you want to pamper yourself in the suite where Kate Middleton spent the night before her wedding to Prince William. London’s hotels have notoriety and glamour in spades, none more so than the following places. 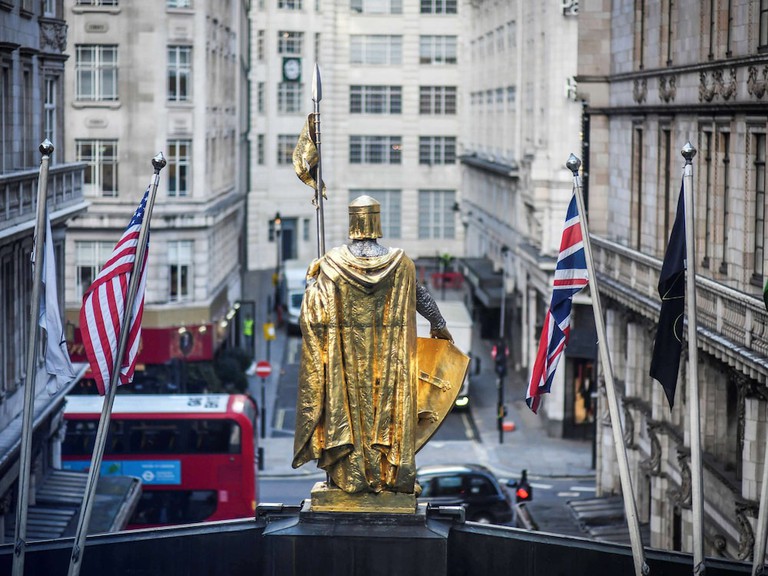 As the cream of the crop, the Savoy is as much a part of London as Big Ben and Buckingham Palace. Opened in 1889, it was a groundbreaker at the time, thanks to the installation of electric lights and lifts. Now Grade II-listed, it underwent a complete revamp in 2010, with the designers sticking to the historic look but with added comforts. 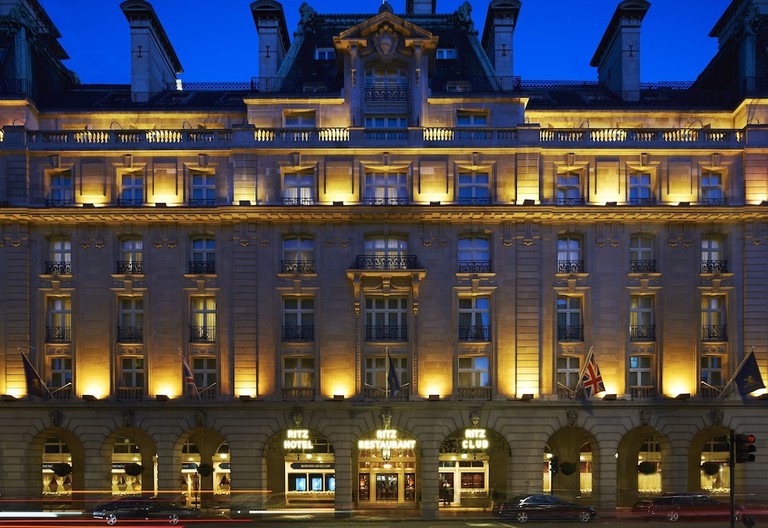 Sister of the Paris hotel, the Ritz London is probably best known for its afternoon teas, served from 11.30am to 7.30pm daily, comprising a delectable selection of dainty sandwiches, cakes and pastries. It featured heavily in the film Notting Hill (1999), when Hugh Grant’s character pretended to be a writer for Horse & Hound to interview Julia Roberts. Stay on a Friday night for dinner and dancing and you’ll feel as though you’ve travelled back in time. 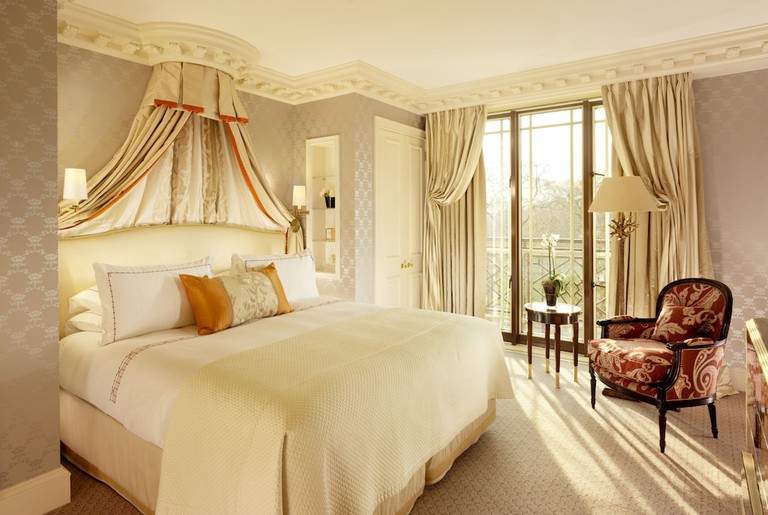 This historic hotel on Park Lane opened in 1931 and still features many of its 1930s decor; over the decades it has played host to a string of well-known faces, including Richard Burton and Elizabeth Taylor, who often holed up in the penthouse. Prince Philip had his stag do here before marrying Her Majesty the Queen. In terms of interiors, things are as traditional, luxurious and opulent as you’d expect. Interesting fact: the hotel claims to have the deepest baths in London. 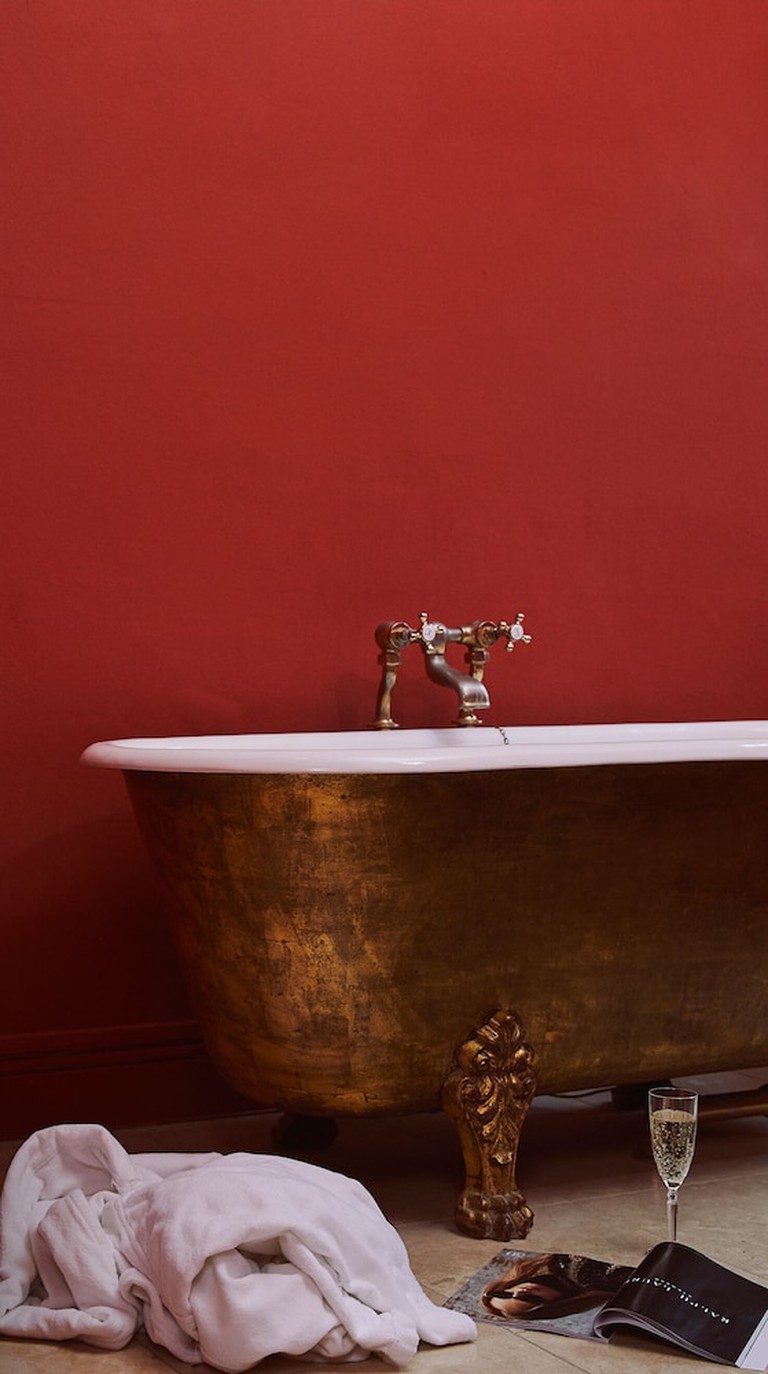 Courtesy the Portobello Hotel / Expedia
View Rooms
Johnny Depp and Kate Moss put this hotel on the map in the 1990s after allegedly filling a bathtub with champagne. But honestly, one look at those fabulous Victorian tubs and you’ll see why they were tempted. The tiny hotel, with 21 belle époque-style rooms, was the merger of two neoclassical mansions in a quiet street in trendy Notting Hill, west London. Each room has atmospheric features and round beds, and thanks to guests such as Alice Cooper and Robbie Williams, it has become a favourite among the rock’n’roll set.
More info 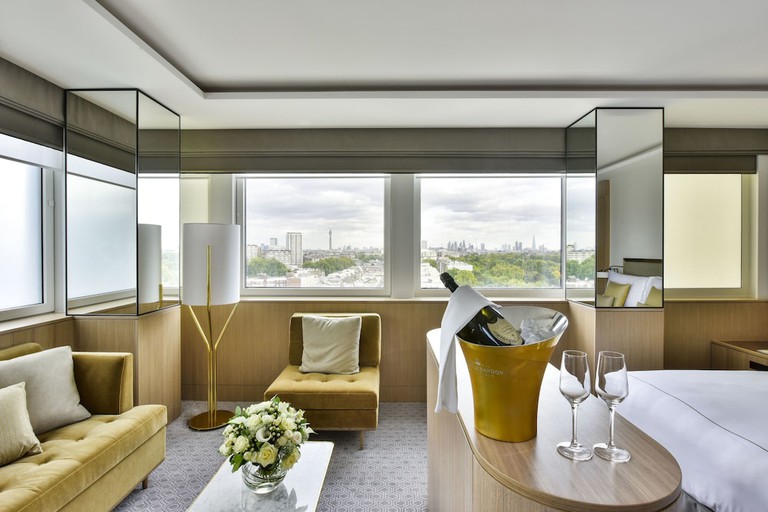 Courtesy of Royal Lancaster London / Expedia
View Rooms
A hop and a skip from Hyde Park, the Royal Lancaster London came to fame after a cameo appearance in the Michael Caine box-office hit The Italian Job (1969). The decor is a throwback to its dapper heyday, with plenty of classy 1960s touches such as azure crushed-velvet sofas and retro carpeting. Large picture windows are a neat touch – so you can spend your evenings watching the sun sink behind the city skyline from the luxury-linen comfort of your king-size bed. Start your day with breakfast at the Park Restaurant: its traditional full English garners glowing reviews.
More info 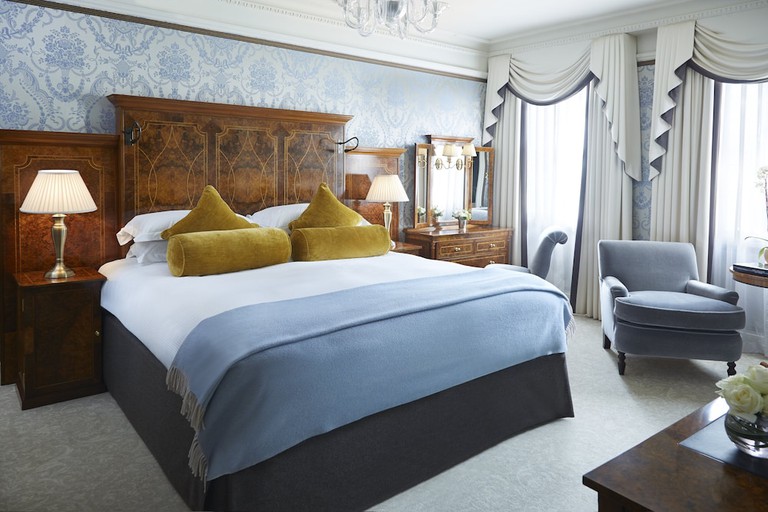 The Goring is famously where Kate Middleton spent the night before her wedding to Prince William in 2011. A favourite among the royals, it is the only hotel awarded a Royal Warrant for hospitality services to the Queen. The entire Middleton clan stayed here – Kate’s parents, Carole and Michael, as well as siblings Pippa and James. Tucked behind Buckingham Palace, the Westminster location is handy for St Paul’s Cathedral, but it’s the traditionally English interior that lends the hotel real charm. Opened by Otto Richard Goring in 1910, the owners say it was the first hotel to offer all-ensuite rooms, and it remains in the Goring family to this day. 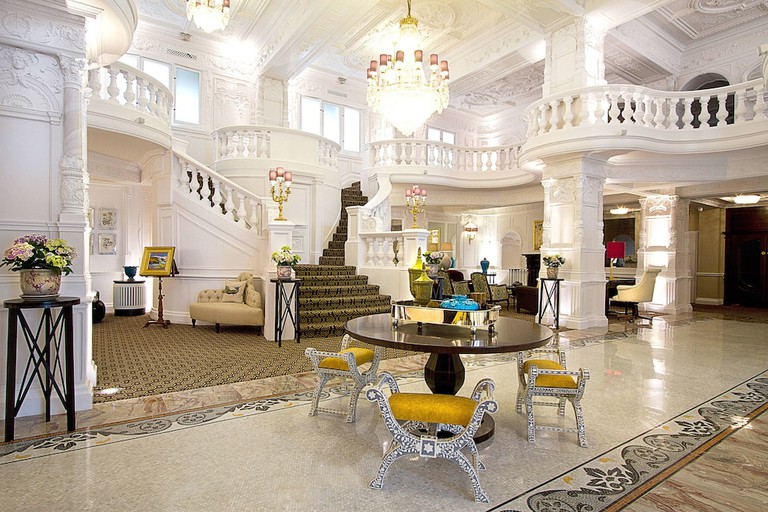 Discreetly located at the end of a drive canopied by branches and greenery next to St James’s Park, St Ermin’s Hotel, built in 1899, was the hub of covert operations during World War II. Since then, film-makers have been drawn to its grand Victorian facade, regal surroundings (Buckingham Palace is minutes away) and ornate, Baroque-style interior. The rooftop served as the setting for Sid and Nancy’s riotous toy-pistol gunplay in the 1986 punk biopic, and the glamorous art nouveau decor was the backdrop to George and Simone’s hurried meeting in Mona Lisa (1986). Rooms are equally classic with marbled bathrooms, luxury White Company toiletries and 24-hour room service. 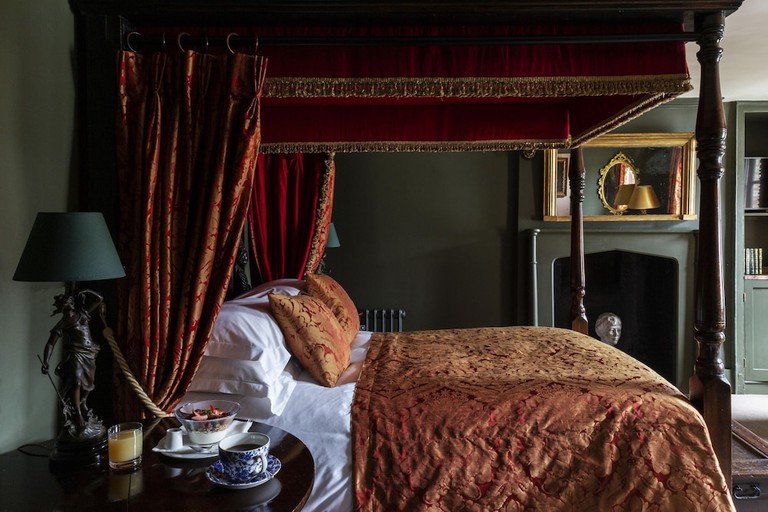 Located on Frith Street in Soho, this 18th-century building is the former home of essayist William Hazlitt, who died in poverty in 1830, yet it feels incredibly authentic even to this day. The floorboards still slope, the door frames can be wonky and the rooms are decorated with traditional paintings. Of course, it comes with a whole heap of charm, including Hazlitt’s cabinet of curiosities and an honesty bar, so you’re guaranteed to feel at home. 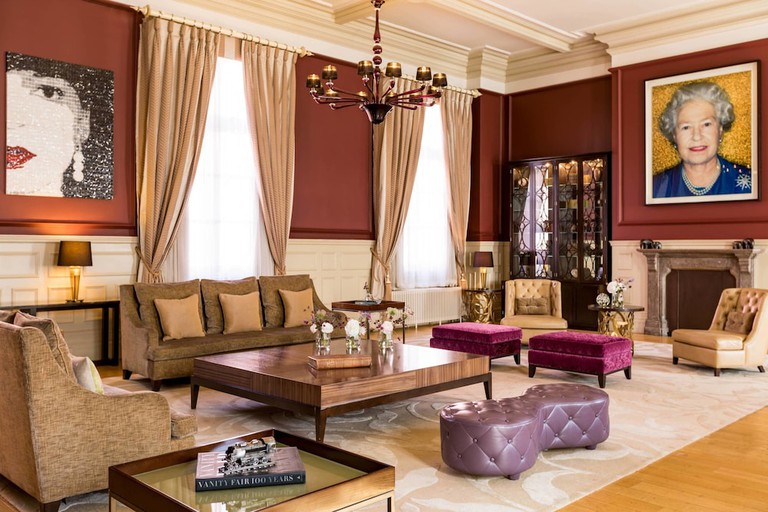 Courtesy of St Pancras Renaissance Hotel / Expedia
View Rooms
Opened in 1873, this hotel, next to St Pancras railway station, used to be known as the Midland Grand. By 1930, it was used as offices after becoming too expensive to heat, and following a huge refurb, it reopened in 2011. Fans of Bridget Jones’s Diary (2001) or Harry Potter and the Chamber of Secrets (2002) will probably recognise it, but tourists are bound to have noticed the impressive building, too. The interior is almost as showstopping as the facade, with lots of gold leaf and marble and an impressively grand staircase.
More info 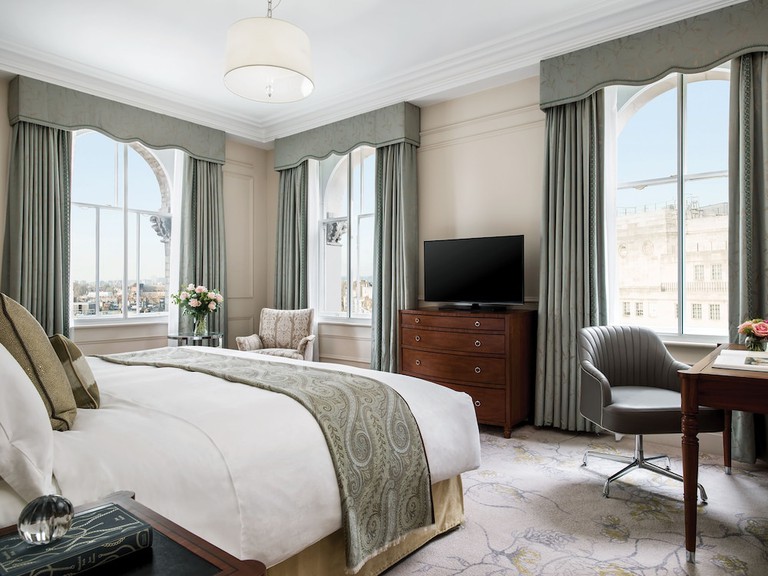 Courtesy of The Langham / Expedia
View Rooms
Built between 1863 and 1865, at a whopping (at the time) £300,000, the Langham was considered London’s first grand hotel. It is London through and through, and today focuses on experience. The Artesian Bar was voted the world’s best bar four years in a row (2011-2015), so head here for a cocktail and watch the world go by.
More info 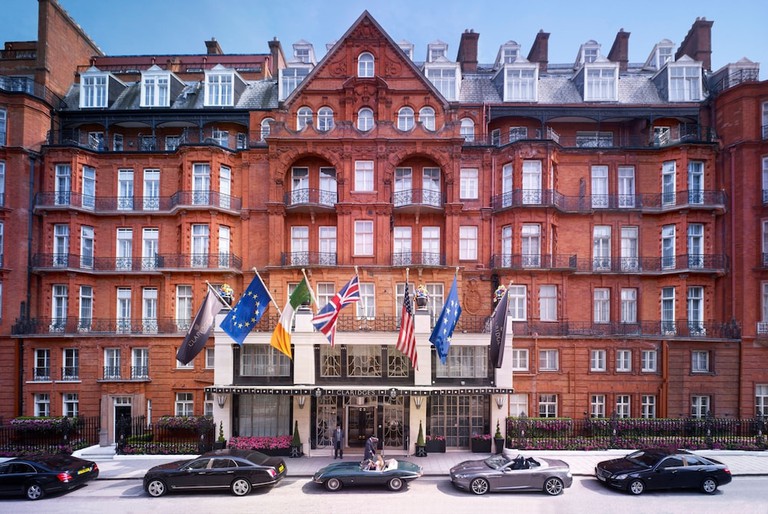 Courtesy of Claridge's / Expedia
View Rooms
Claridge’s is an elegant Mayfair institution that’s often referred to as the “annexe to Buckingham Palace” – though it would never be so indiscreet. Founded in 1812, it flourished during the 1920s flapper years, ushered in royalty during the 1940s and played white-gloved confidante to stars such as Cary Grant, Audrey Hepburn and Bing Crosby during the 1950s. But it’s not one to languish in the past: Diane von Furstenberg, who first stayed here in the 1970s, was drafted in to dress up the rooms, and other designers who have made their mark include David Linley, Thierry Despont and David Collins. Need further proof of pedigree? Supermodel Kate Moss held her 30th birthday here.
More info 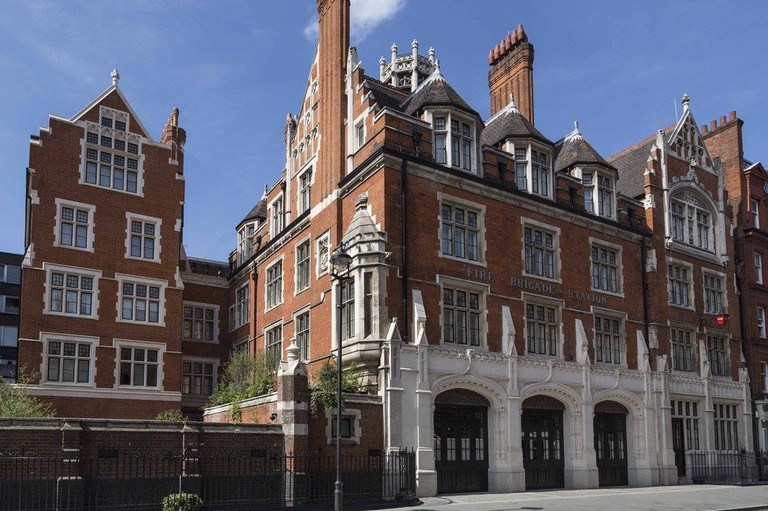 When it opened in 2014, the Chiltern Firehouse quickly became the most talked-about celebrity hangout in London. Helmed by André Balazs, the mogul behind Château Marmont in Hollywood, it has maintained a reputation as a retreat for the rich and famous. Tables in the restaurant are nigh-on impossible to come by, while entry into the secretive Ladder Shed bar actually is impossible – despite numerous articles on how to trick your way in. A room reservation guarantees you entry to the ultimate see-and-be-seen party destination, and rumour has it Bill Clinton jumped on the decks one night. Rooms are done out with velvet couches, stained-wood headboards and real fireplaces – the perfect place to hole up like a celebrity.