The History Of The Royal Festival Hall in One Minute 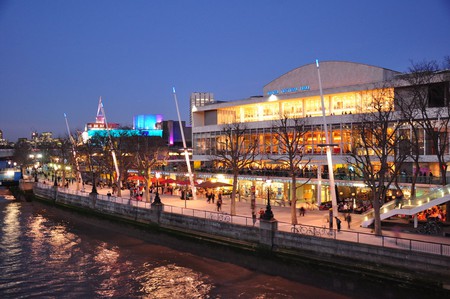 London’s Royal Festival Hall is a multi-functional arts and performance venue which sits on the banks of the River Thames, part of a complex of artistic venues that make up the Southbank Centre— the largest centre for the arts in Europe. The Grade I-listed building is home to the London Philharmonic Orchestra, and hosts an eclectic programme of events year round, including concerts, dance performances and talks. We introduce you to the 65 year history of this, the cultural heart of the capital.

In 1948, Prime Minister Clement Attlee announced the Labour government’s plans for the Festival of Britain, a nationwide exhibition to be held in the summer of 1951. Designed to promote Britain‘s leading contributions to science, technology, industrial design, architecture and the arts, the festival was also intended to serve as a ‘Tonic to the Nation’, raising moral and fostering a sense of recovery following the devastation of World War II. Its centrepiece was to be London’s Southbank— amongst a collection of temporary domes and pavilions for the festival, the Royal Festival Hall was built, restoring once again a major concert hall to the city following the destruction of the Queen’s Hall during the Blitz. 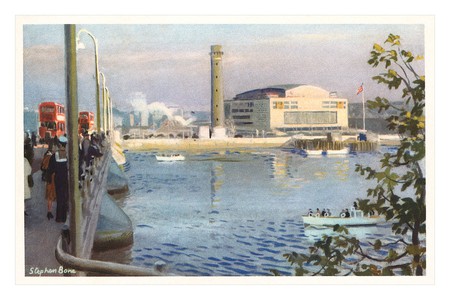 A postcard sent in 1957, showing the Royal Festival Hall | ©totallymystified/Flickr

The foundation stone was laid by Mr Attlee in October 1949. Just 18 months and £2 million pounds later, the hall opened, with a ceremonial concert attended by King George VI and Queen Elizabeth. The principal architect for the project was Robert Matthew, supported by Leslie Martin and Peter Muro — around half of the workers involved in building the hall were Jewish refugees, as pointed out by the current leader of the Labour Party, Jeremy Corbyn, at a recent Royal Festival Hall event. The architects were very keen not to replicate the classicism encapsulated in other public buildings, with their design becoming a true beacon of Modernism. The bright white façade and use of large amounts of glass contributed to the optimistic feel of the building, contrasting it to the dark and muted tones of the surrounding city.

The design of the building was intended to reverberate with a general feeling of inclusivity — the various floors are arranged in a flowing, wide open-plan design around symmetrically placed staircases, with Martin in particular influenced by socialist Nordic design. The various foyers, bars and restaurants were intended as classless spaces, open to all, honoured today by the building’s radical ‘open foyer’ policy which allows the public to roam throughout the building all day, seven days a week. Free exhibitions, lunchtime and evening concerts, various study and meeting spaces and a variety of bars are on offer.

The festival hall was joined by two more music venues, the Queen Elizabeth Hall and the Purcell Room, opened in 1967, and the Hayward Gallery in 1968. Each of the separate venues are connected together by an elevated network of concrete walkways. The adjacent British Film Institute and the Royal National Theatre opened in 1957 and 1976 respectively, though they are independent of the Southbank Centre.

In 2005 the hall underwent an extensive program of renovation costing around £91 million, reopening to the public in 2007, whilst several shopping and dining venues have opened along this stretch of the Thames, further cementing its status as a thriving cultural hub.