The History Of Regent Street In London 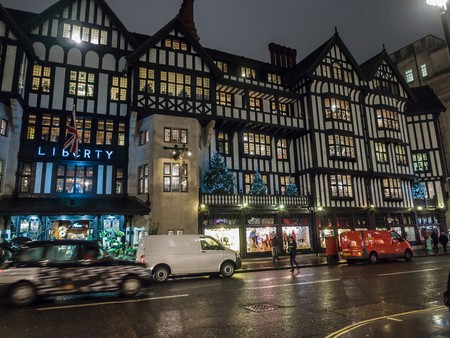 Liberty of London, during the Christmas shopping season, 2012 | ©James Petts

Who would have guessed that London’s Regent Street was the world’s first retail shopping street? Everyone needs a little retail therapy every now and then! Today, it remains the world’s top-ranking ‘Mile of Style’ shopping destination – many of the shops are flagship stores for leading brands, providing a showcase from which they launch their new lines. Regent Street stands majestically, receiving about 7.5 million tourists each year.

THE QUADRANT, REGENT STREET, BEFORE THE REMOVAL OF THE COLONNADE | ©British History Online

The Past & The Present

Regent Street holds an exciting and energising place in the history of Britain, dating as far back as the 19th century. It enthused and enthralled both investors and builders alike – offering a once-in-a lifetime chance to work on a project that was designed by Britain’s most famous and distinguished architect, John Nash. Nash had a vision of handcrafted detailed architecture for London’s shops. Absolutely no one dared to argue with his design – he was simply a genius. The project took 14 years to complete, but Nash was fortunate in being fully supported by Prince Albert Regent – from whose name ‘Regent Street’ is derived. Compare Regent Street architecture with the modern ‘Walkie Talkie Tower’ or the ‘Gherkin’ to compare the difference! 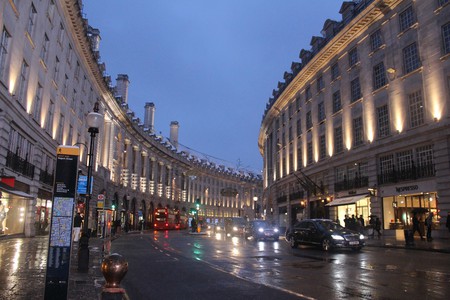 When you visit Regent Street, make sure you allow time to stand and wonder. Momentarily try to ignore the hustle and bustle. Stand and admire Nash’s art looking up from Piccadilly Circus Station in the daytime and you will be rewarded with the true British majesty of Nash’s architectural scenery. Stroll up from Piccadilly towards Oxford Circus Station in the evening and you will be silenced with surprise as you consider Nash’s indelible craftwork — this is where the real magic begins: the imposing twin buildings on opposite sides of the street are curved beautifully and are simply stupendous. Stand outside Hollister and look up and you will see mansard roofs, adorned with gilt acorns and other sculptures on top and without a doubt you’ll want to return – again and again.

Liberty of London, during the Christmas shopping season, 2012 | ©James Petts

Regent Street wouldn’t be the same without the legendary Sir Arthur Lasenby’s Liberty shop. Sir Lasenby was the founder of Liberty, which has been there since 1875 – the longest standing shop in Regent Street. It’s homely and very British. Shoppers are fixated with and fascinated by Liberty’s homeware and fashion, that brought profit and prestige to Regent Street and added interest to peoples’ homes. It would appear that Nash and Lasenby were like-minded people — both had visions of challenging Paris as the fashion capital of the world. Very quickly, Liberty secured a strong relationship with many British designers such as those of the Art Nouveau movement and was soon known all over the world for its finest designer fashion and homeware. The store, not surprisingly, continues to celebrate Sir Lasenby’s legacy by printing some of his original designs on scarves, accessories and fabrics.

It is remarkable to think that in 1875, Sir Lasenby borrowed the princely sum of £2,000 from his future father-in-law and invested it to set up the Liberty store at its present site. Having paid off his loan within 18 months, he extended the store to double its size. Now, it is worth some 30 million pounds. Had he lived to see the store’s renovation in the 1920s to a Tudor style, he would have been gratified by the fact that his iconic Liberty was constructed from the timbers of two famous ships — the Royal Navy: HMS Impregnable and HMS Hindustan; an incredible idea. Imagine how proud Sir Lasenby would be if he knew that his Liberty store continues to maintain its original attitude to fashion designs. Liberty is recruiting new ‘talented and emerging’ designers to help the store to uphold its reputation of British fashion culture. 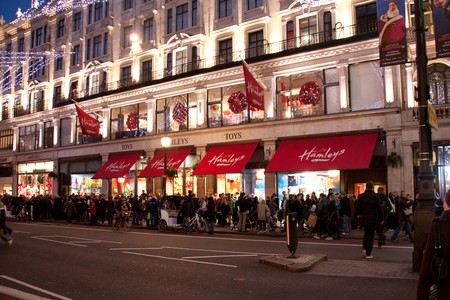 An equally enchanting story, the history of Hamleys store will no doubt take you back to your childhood. Born in Cornwall, William Hamley might have become a tin miner or a fisherman, as was the norm back in 1760. However, Hamley was not destined for either of these professions. He was an unusual inventor that puzzled and provoked young children to expand their thinking skills. Hamley had a dream, which was that one day he would open the best toy shop in the world. His dream came true in 1881 when he opened his shop in Regent Street. Spectators flocked to his store filled with railway trains, pedal cars, puppets and toy theatres. He couldn’t expand the shop width-ways so he went upwards instead and added a further five floors of toys! It is a world of adventure and mystery – the squeaking, bleeping, whizzing and chiming of toys in the shop was his pride and joy. Hearing children laughing excitedly as they goggled at the sheer choice spread across seven floors of toys and games was like Christmas everyday. 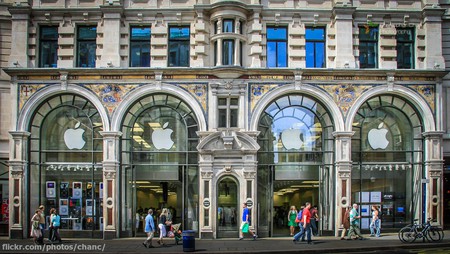 It was a dreary night in November when a staggering five thousand enthusiastic Apple fans queued up eagerly for the opening of the store on 20th November 2004. Outside its shop, Regent Street became something like a new Vatican Square of pilgrimage to social media. People from all over the country waited for more than 24 hours to take a peek at it so that they’d be the first in the know. What Apple has done is nothing new; it has simply emulated the past scenes of 1875. It is possible to view Apple as an extension of Hamley’s toys in the mechanics of making the brain engage with technology. The store is however extremely vibrant and its open space and vast area of stations is very relaxing, creating an engaging learning environment. The interior design of the store is hip-hop and the glass stairway brings an illusion of stairways to heaven. If you are a borderline geek, there’s never a dull moment to be spent there, even if you don’t have money to spend on the day.