The History Of Kensington Palace, London, In 1 Minute

With 400 years worth of history, Kensington Palace still remains a working Royal residence with great historical importance. It was the favourite residence of successive sovereigns and today it accommodates the offices and private apartments of a number of members of the Royal Family, including The Duke and Duchess of Cambridge and Prince Harry.

Kensington Palace began as a simple Jacobean mansion named Nottingham House, built by Sir George Coppin in 1605 in the village of Kensington. When William III came to the throne in 1689, he and his wife started to look for a better residence for comforting the asthmatic William. They bought Nottingham House and started with its immediate expansion. Constructor Sir Christopher Wren added a three-story pavilion, north and south wings and surrounded the palace with straight cut lawns and stately gardens with paths and flower beds at right angles. The Royal Court moved in at the end of 1689 and for the next 70 years Kensington Palace was a favoured residence of British Monarchs. After William III’s death the palace became residence to Queen Anne, who let Sir Wren finish the extension with sections known today as the Queen’s Apartments and the Queen’s Entrance. The most notable contributions were the gardens, including an Orangery and a magnificent 30 acre baroque parterre. 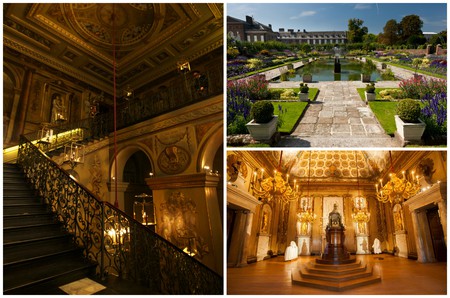 In the 18th Century, King George spent lavishly on new Royal Apartments, whilst King George II didn’t undertake any major structural changes. His wife, however, instructed a royal gardener with the new design for Kensington Gardens, and some of these features still remain today, including The Serpentine. With the accession of King George III, Kensington Palace was only used for minor royalty. His sixth son, Prince Augustus Frederick, was allocated apartments in the palace, where he amassed a huge library.

The palace was severely damaged during The Blitz and was renovated in 1960 under the direction of the Department of Environment. In 1981, apartments eight and nine were combined to create a London residence for the Prince of Wales and his wife Diana; remaining as the Princess’s official residence after their divorce until her death. Her sons William and Harry were raised in Kensington Palace, where Harry still has a one-bedroom apartment, and the Royal Couple William and Kate moved into the palace with their son George in 2013.

Today parts of the palace are open to the public with museums, exhibitions, audio sequences and interactive experiences, while other remain closed as home to members of the Royal Family.