The Great River Race Is the Marathon of the Thames 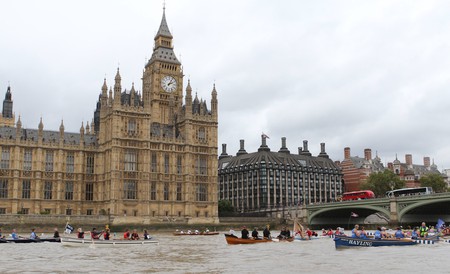 The London Marathon is one of the biggest races in the world, with millions of people flocking to the UK’s capital for the annual event. As iconic, if not more so, is London’s famous river, the Thames, and it has its very own marathon.

The Great River Race is a brilliant event, covering nearly the same distance as the beloved road race. While road marathons stretch out over 26.2 miles, this river variant sees crews take on 21.6 miles in traditional boats, starting from London Docklands and ending in Ham, Surrey. According to the race’s official website, ‘any traditional boat, or traditional-style replica, powered by a minimum of four oars or paddles, may enter’. 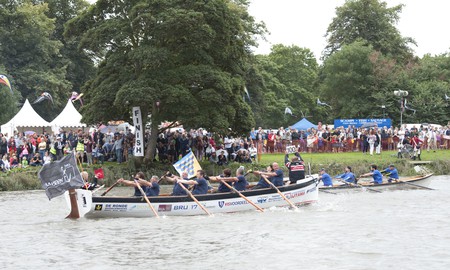 Like the London Marathon, the contest is as much for casual competitors as elite athletes, with over 330 crews from all over the world taking part. For some, it is simply about completing the race in the fastest time possible, while for others it’s about fancy dress, raising money for charity and just being able to complete the challenge.

One of the key aspects of the race is that it is handicapped, to give every crew a fairer chance of winning. Boats leave on a ‘slowest first, fastest last’ basis, so the quickest crews and those with the sole intention of winning the race must overtake all those ahead of them, starting well over an hour after the first crews take off. This is at odds with road marathons, where the elite athletes set off first so as not to be bothered by the crowds of recreational runners.

Because the race follows the Thames, it passes some of the capital’s most famous landmarks, taking in Canary Wharf, Tower Bridge, the Tower of London and the Houses of Parliament. It finishes in front of Ham House, a beautiful Grade-I listed building now owned by the National Trust. 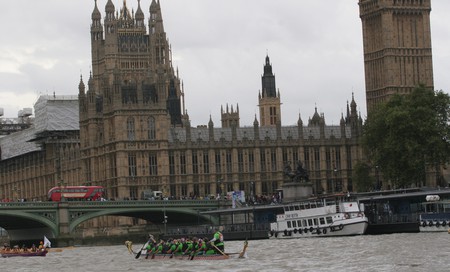 When the race’s winner crosses the finish line – to the sound of a cannon broadside, no less – they claim the Challenge Trophy of The Company of Watermen & Lightermen, as well as the title of UK Traditional Boat Champions.

Competitors can hire, buy or even build their boats, should they not happen to have a traditional rowing boat handy. There are regulations on what vessels are allowed, and what can be included in their design, among which is the rule that all boats must fly a flag (of at least 3ft x 2ft) for the duration of the race. It can be whatever competitors choose, representing a club, a country, even a company – minus advertising slogans – or crews can create one from scratch.

The Great River Race will take place on the September 9, 2017. For more information head here.