The Cricket Pitch That Sits Above a Motorway 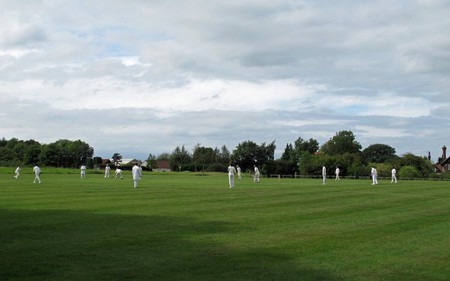 In a small part of greater London, a quintessential example of British sport hides one of the UK’s worst eyesores, with tarmac and car fumes giving way to a grassy wicket and cucumber sandwiches.

Epping Forest’s 6,000 acres straddles Greater London and Essex. Within it, you’ll find an amateur cricket side, who have managed to play their games in a small part of the forest for over half a century, despite the fact that one of the UK’s busiest highways runs right through their home pitch.

The Epping Foresters Cricket Club have played in the same location on Mill Plain since 1947, after they negotiated a license with the Conservators of Epping Forest. It was at that point they adopted the name they still use today.

The club plays its game in the Herts & Essex League, with two sides competing across the divisions. There are also age-group teams for children, as well as a Sunday league for more casual players.

During the 1960s, the club’s ground and existence was put in jeopardy with plans for the new M25 cutting directly through the pitch. The work actually took place in the early 1980s, and the club was temporarily re-housed in that period, but they returned to their spiritual home after a tunnel was built directly underneath their ground. As a result, since 1984 the stretch of the M25 between junctions 26 and 27 has been the Bell Common Tunnel.

The addition of Greater London’s notorious motorway underneath the team’s home ground, in truth, had very little negative effect on the team, the temporary relocation aside. Once they returned to Epping Forest they had a new clubhouse, and have played their games there ever since.

Motorists can be driving along the motorway completely oblivious to the fact they’re heading under the Epping Foresters home ground, while the cricket’s side’s opposition could turn up to a game without knowing one the country’s busiest roads is running underneath the wicket.

The M25 circles the whole of London, with 117 miles of road. While the vast majority of it, and even the mere mention of its name, brings little but misery to drivers, it’s nice to know that a section of it, however small, can bring a small section of London a bit of joy each week. That’s assuming the Foresters win of course.