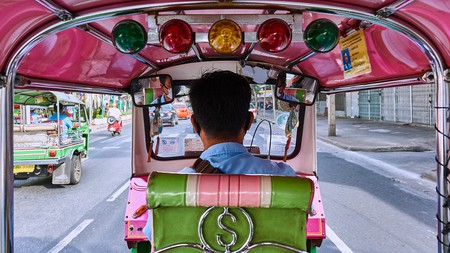 The art of travel has changed beyond all recognition in the past few years. What once cost a fortune and took weeks of planning can now be documented on a phone and by booking a flight on the way to the airport. Here’s a selection of YouTube’s finest travel channels and vlogs that showcase the creativity the new medium opens up to all of us.

Travel stories have been shared orally from the earliest days of humanity. Yarns of great adventure may have been embellished with the occasional sea monster and one-eyed giant, but even these fanciful accounts had some basis in reality. Journals by explorers were hugely popular with the general public soon after the introduction of mass transit, revealing treasures such as Ancient Egypt and other global wonders.

Travel books, high-quality photography and newspaper accounts soon followed, before TV took over and brought incredible sights into living rooms around the world. People who never thought they would experience the magic of travel for themselves were now given the urge to explore, and so a boom in the tourism industry followed.

Today, thanks to the proliferation of online travel, you can see the world with the simple click of a button.

It’s not always easy to watch other people live out fantasy lifestyles while we can only look on enviously, planning our annual vacations from home. Sorelle Amore has benefited more than most, but her graciousness and warm approach to viewers make her journey all the more pleasurable to watch.

One of India’s best-known travel vloggers, Varhun Vagish initially began his channel as a domestic series. Having explored the country extensively, Varhun is now taking on the surrounding region and is keen to get other Indians to do the same. We really like the way affordability is at the top of the list of considerations when it comes to this vlog – a rare but welcome consideration.

Likeable Geroge Benson has wisely decided to separate his passion for travel from his love of football. The travel channel follows George as he explores various locations in his unique style, whereas the vlogger’s other channel focuses on his beloved Chelsea FC. You’ll be pleased to know George’s terrible life choices seem to be limited to his sporting preferences.

If any two things work better together on YouTube than food and travel, we have yet to discover them. Mark Wiens has cultivated a huge following online, and it’s easy to see why. His love of food and willingness to hurl himself into every challenge is infectious. While perhaps not for travel purists, Migrationology is still one of the most informative channels to follow on the platform.

Once of this parish, Eva zu Beck is now among the most popular personalities on the travel circuit. Her videos often feature the places we rarely see covered by mainstream media, making her insightful look at the world particularly welcome. Eva’s rise to fame began with a couple of early videos going viral in Pakistan, and she hasn’t looked back since.

A trio of friends from different parts of the world make up The Budgeteers, and they have stumbled across a winning formula – fun, enlightening and easy-to-follow trips that appeal to everyone with limited funds. The only problem these vloggers face is that they are prone to becoming victims of their own success. Every step away from the “budget” concept seems to be a massive misstep, thrusting them back into the clutches of sponsors and brands eager to capitalise on their unique skills. This is one team that we want to see less of as their format works best in periodical doses.

Marine biology graduate Mike Corey prides himself on taking on the more extreme side of travel through his online adventures. Not all of his choices are worth recommending, as some border on unethical. However, when he gets it right, he really gets it right. The slick production values on his videos are incredibly planned out, making Mike an easy watch.

Boasting over 1 billion video views and 5 million followers on social media, Drew Binksy has been championed by several brands in the relatively short time he has been a professional travel blogger. His ultimate aim is to visit every country in the world – something he was so close to doing before the coronavirus outbreak. We’re sure his adventures will continue again soon, and in the meantime, he can keep perfecting his golf swing, a sport he regularly partakes in when travelling.

Part of the wider byfood.com network, this series serves as a treat for lovers of everything Japanese. The main focus is the country’s culinary delights, but host Shizuka Anderson clearly has a flair for travel blogging, too. Describing herself as a Tokyoite, the presenter ends up discovering places that would light up any Instagram feed. It’s one to check out if you’re in need of improving your social media game.

Chas Bruns fully embraces the thrifty lifestyle he espouses in this vlog all about the virtues of penny-pinching. Chas hunts out the cheapest experiences and holidays he can, sharing his tips with viewers. This series might not be the most polished one on this list, but it’s arguably the most useful.

Thankfully, FunForLouis is also fun for the rest of us. This adventurous travel expert might initially appear like the stereotypical travel dude we all want to avoid on holiday, but he’s actually developed a keen eye for the unexpected. Louis is a great host who is at his best when taking off on his own with only a small camera for company.

100 Countries with Kara and Nate

Travel couples are probably the most annoying people across social media. There’s a delicate balancing act between being overly smug and privileged and genuinely engaging and informative, but Kara and Nate just about get it right. Their goal of visiting 100 countries by 2020 has now been achieved, so we do wonder if the pair will be slowing down, especially given how difficult it is to travel at the moment.

The high levels of production employed by Marko and Alex, two wanderlust-fuelled brothers, help elevate their channel to another level. Each destination they visit gets the documentary-style treatment, and their videos are all the better for it.

If you’re interested in what it’s like to live in a country, then Gareth Leonard’s deeper approach to travel is for you. The flashy, short-form videos that other vloggers aim for really aren’t worth your time if you want to explore a new place with someone keen on expanding cultural horizons. Gareth takes his time with each piece of content and delivers a series that will make you want to learn more before you travel.

Another great vlog with a strong emphasis on food is Miss Mina, hosted by the eponymous Mina Oh. This particular channel is about global travel, whereas a more popular incarnation – Sweet and Tasty TV – hones in on Korean culture. Both are riveting in their own way, although food videos are definitely the strong point throughout.

This honest travel vlog is packed full of practical tips and helpful information. Making viral content doesn’t appear to be at the forefront of Mark Wolters’ thinking, as he and his family explore the world. It all started from one travel let-down and has now blossomed into a wonderfully helpful resource.

Don’t be put off by the rather disturbing name of the vlog – Aly (who is a psychology graduate from England) is actually a great host and guide. Aly is so good that she’s self-published a book to help others looking to travel to some of the many places she has visited.

We’ve previously lamented the lack of diversity when it comes to travel shows on TV, and sadly, the same is also true for vlogging. One man making a real change is Phil of Philwaukee fame, who has teamed up with the Matador Network for this series. It’s fun, full of positive vibes and something we really want to see more of.

Jumping into a vintage Volkswagen (VW) van and driving off into the sunset is the stuff teenage dreams are made of. It’s also the reality that this vlog follows, as two intrepid travellers aim to go off the grid and find their own adventures around the world. VW vans apparently have different nicknames depending on where you are – for Brits, they are known as camper vans, while Americans call them buses. Kombi is the most popular term with the rest of the world.

Originally from Australia and now settling into the Los Angeles lifestyle by way of a significant stay in Shanghai, Jenny Zhou’s career is just as fascinating as her travel content. There are some great on-location videos on her channel, but as Jenny attempts to make it in the acting world, we wonder how many more travel videos we’ll get. There’s still plenty to explore in the vlogger’s back catalogue though, and her Shanghai films, in particular, make for fun viewing.