The Best Places to Get Cronuts in London 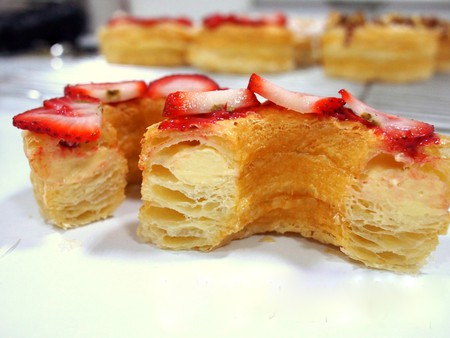 It was the dessert that launched a thousand copycats. When Dominique Ansel first launched his now trademarked creation in his New York bakery back in 2013, the world collectively lost its mind. Today the doughnut/croissant hybrid can be found in every corner of the Earth, and chefs everywhere have been inspired to get to work on their own Frankenpastries. Here we take a look at the best cronut knock-offs on offer across London, and let you in on a particularly exciting foodie development in the process. No spoilers.

Claiming to be the ‘world’s first artisan baked doughnut/croissant doughnut brand’, Dum Dum Donutterie have been making headlines recently thanks to The Crone — an ice-cream-cone-doughnut mashup causing serious pangs in the nation’s collective stomach. They may be being upstaged right now, but the plain old Dum Dum (aka cronut) is still a crowd-drawer. Flavours include Crême Brûlée, Almond Cream & Pistachio and The Zebra, which contains layers of plain and chocolate croissant dough filled with chocolate buttercream and topped with chocolate ganache. Dum Dum Doughnuts also have the distinction of having created the world’s most expensive cronut: The Luxury Zebra, which costs a cool £1500.

Bakery, Market, British
Facebook
Email
Twitter
Pinterest
Copy link
Share
Map View
Syd Aston first established his bakery in Waterloo all the way back in 1985. It was one of the first organic bakeries in London, and they have been making their cakes and specialty breads for over 30 years now. In 2014, Aston’s moved their premises to a farm in Berkshire, but the artisan bakers’ goodies can still be found at markets around London, including Brockley Market, Stepney Farmers Market and Bermondsey Farmers Market. Stop by to sample their delicious cronuts; flavours include a chocolate cream filling paired with rose water icing, or lemon curd and coffee icing.
Open In Google Maps
London, United Kingdom
Give us feedback

Bakery, Patisserie, European, British
Facebook
Email
Twitter
Pinterest
Copy link
Share
Map View
This sweet bakery in Whitechapel is a fourth generation, family-run joint, founded by Ukrainian baker Kyman Rinkoff in 1911. Alongside their specialty breads, cakes and pastries, Rinkoff also sell their own version of the cronut, named the crodough. Rinkoff operate two coffee shops in the Whitechapel area, the one on Jubilee street being attached to their bakery — it’s pretty easy to miss, being tucked off in a courtyard between residential buildings, so just follow your nose. Crodough flavours include Toffee Apple Crumble (a fresh apple and cinnamon filling combined with crunch crumble and toffee drizzle topping) and S’More (layers of injected Nutella, with toasted marshmallow fluff on top).
Open In Google Maps
222-226 Jubilee Street, Stepney Green, London, England, E1 3BS, United Kingdom
+442077901050
Visit Website
Give us feedback

Kooky Bakes are an award-winning small-batch bakery, bringing the taste of authentic American baked goods to British shores. Founder Scott, from Colorado originally and Hackney more recently, defines his cakes and bakes by a commitment to big, fun flavours, and fresh British and fair-trade ingredients. Kooky Bakes’ produce are stocked at a range of independent coffee shops around town, at some seriously upscale stores like Fortnum & Mason and Selfridges, and they can also be found at the weekly Brockley Market and the Kerb collective’s events. Their cronuts go by the name of the ‘dosant’, and come in varieties like Strawberries and Cream, Maple Bacon or Raspberry White Chocolate.

Bakery, Cafe, British, $$$
Facebook
Email
Twitter
Pinterest
Copy link
Share
Map View
In a very exciting development to London’s cronut scene, the creator of the coveted pastry himself is set to open his first British bakery this September. Following the cronut’s conception three years ago, Ansel’s bakery became one of the most popular in New York, and it looks like his Belgravia store is going to be a suitably swanky affair — the bakery will be on the ground floor along with a seating area and courtyard space with retractable roof and vertical garden, while visitors could take a peek inside the pastry kitchens upstairs. Although the new location will serve some exclusive British creations, the classic (and now trademarked) Cronut will be making the transatlantic journey, available in one special flavour per month — previous ones have included Salted Dulce de Leche, Valrhona Chocolate Champagne and Rum Caramelized Banana Brown Sugar.
Open In Google Maps
17-21 Elizabeth Street, Belgravia, London, England, SW1W 9RP, United Kingdom
+442073247705
Visit Facebook page
Give us feedback

Owned by former fashion designer Walid Al Damirji and Joel Bernstein, the previous head of concept at Liberty, Chocomaya is a true sweet-tooth’s sanctuary. Half artisan bakery in one room, half chocolatier in the other, there’s plenty more to fill your cravings with here besides cronuts, but Chocomaya’s are pretty special. Named ‘cocodoughs’, they are decorated in bright colours and adorned with edible flowers or other pretty bits and bobs, and are basically as ornate as you would expect from the fashion-minded partners.