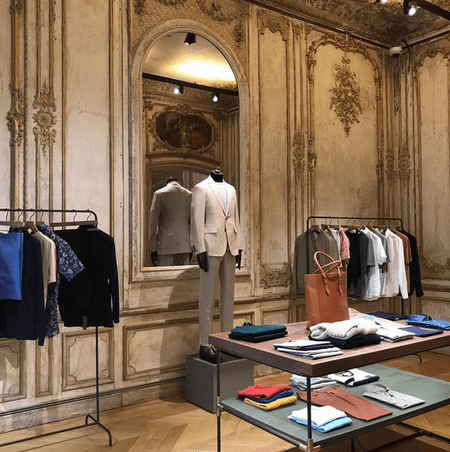 Savile Row is arguably the most famous menswear destination in London and it’s a hub of all-things suiting, from bespoke tailoring design, to the most considered of final touches. Here, we round up the best of the best – from heritage labels to something a little more modern – to make your next shopping trip an informed one.

Shop
Facebook
Email
Twitter
Pinterest
Copy link
Share
Map View
Huntsman & Sons launched in 1849 in Mayfair before officially moving to Savile Row in 1919. Priding itself in being one of the street’s most long-standing establishments, it offers ready to wear designs but specialises in bespoke made-to-measure suiting and shirting. Each suit takes up to 8 weeks and 60 hours to craft, but it’s worth the wait when you get to put a personal spin on the label’s established aesthetic. All craftsmanship is done on Savile Row itself and comes accompanied by a superior level of service, which is perhaps why celebrities including the likes of Cecil Beaton, David Bowie, Bing Crosby and Colin Firth have all championed the brand.
Open In Google Maps
11 Savile Row, Mayfair, London, England, W1S 3PS, United Kingdom
+442077347441
Visit Website
Give us feedback

Shop
Facebook
Email
Twitter
Pinterest
Copy link
Share
Map View
A family-run business offering a truly British bespoke suiting service that starts and finishes on Savile Row, Henry Poole is a heritage label with a glowing reputation. Credited with inventing the dinner jacket, its approach to tailoring fuses traditional technique with a modern sensibility and the process spans initial pattern design to the smallest of final touches. As a client, you’ll be able to choose from over 6,000 fabrications to find the perfect combination for your investment and enable you to create something that’s completely unique to you and your taste. The showroom itself is bedecked with opulent furnishings, rich wood, leather features and brass accents, much like a traditional manor house but placed in London’s most iconic suiting district.
Open In Google Maps
15 Savile Row, Mayfair, London, England, W1S 3PJ, United Kingdom
+442077345985
Visit Website
Give us feedback

Shop
Facebook
Email
Twitter
Pinterest
Copy link
Share
Map View
In 2005, Anderson & Sheppard did something to really break the mold by moving away from Savile Row – where it had stood since 1913 – and onto Old Burlington Street in Mayfair. Not exactly far but a statement all the same, its continued success is testament to how well the brand has maintained its loyal (and occasionally famous) client base. Not only does it specialise in bespoke suiting, but it also offers a host of additional products, creating a sense of lifestyle around the brand. When it comes to outerwear, no one does the classic ‘English drape’ quite like Anderson & Sheppard; a look that features a slightly softer silhouette and more languid lines than traditional menswear dictates. The verdict? If it’s good enough for the Prince of Wales, then it’s good enough for us.
Open In Google Maps
32 Old Burlington Street, Mayfair, London, England, W1S 3AT, United Kingdom
+442077341420
Visit Website
Give us feedback

Market, Store
Facebook
Email
Twitter
Pinterest
Copy link
Share
Map View
It’s testament to the quality of design and craftsmanship that new kid on the block, Richard James, has earned itself a spot on Savile Row after just being in business since 1992 (over a century less than most of the street’s inhabitants). It’s the only designer in our line-up to showcase at London Fashion Week Men’s Collections and it brings a modern approach to bespoke tailoring with slim-cut suiting and pops of unexpected colour featuring in almost every collection. For many reasons, this boutique really stands out from the crowd, so if you’re in the market for something a little different, then this could be the store for you. Championing a longer, more waisted blazer silhouette than seen created by of the more traditional labels, it puts its own recognisbale aesthetic on traditional made-to-measure design.
Open In Google Maps
29 Savile Row, Mayfair, London, England, W1S 2EY, United Kingdom
+442074340605
Visit Website
Give us feedback

Store
Facebook
Email
Twitter
Pinterest
Copy link
Share
Map View
Drakes specialises in luxury scarves and ties, so it’s the perfect addition to the array of tailoring specialists that it sits alongside on Savile Row. Unlike most of the establishments on the street, Drakes originated in London’s East End, which is where the traditional silk district was born. Now, it stocks not only luxury accessories but knits, shirting and formalwear as well, which can all be ordered through their established made-to-order service. The flagship store in Mayfair has been newly refurbished and accessories don’t come much better presented than this. Think sleek wooden center-tables, brass accents and minimalistic hanging rails that showcase the designs in a masculine, design-focused manner.
Open In Google Maps
3 Clifford Street, Mayfair, London, England, W1S 2LF, United Kingdom
+442077342367
Visit Website
Give us feedback

Shop
Facebook
Email
Twitter
Pinterest
Copy link
Share
Map View
With stints on the Kings Road and in Covent Garden before marking its now-comfortable spot on Saville Row in 1998, William Hunt is one of the younger additions to the world-famous tailoring location. This much is clear within its approach to suit design. Modern cuts and splashes of colour define the label’s aesthetic, with certain pieces paying homage to menswear icons throughout the ages. The result is a strong, masculine silhouette with a touch of finesse that’s sure to instill confidence in its wearers.
Open In Google Maps
41 Savile Row, Mayfair, London, England, W1S 3QQ, United Kingdom
+442074391921
Visit Website
Give us feedback

Store
Facebook
Email
Twitter
Pinterest
Copy link
Share
Map View
Gieves and Hawkes may be a heritage label but it takes an ever-evolving approach to menswear design and now offers a ready to wear collection as well as signature suiting. The label’s roots are in military uniform design and this influence can be spotted in subtle but relevant attributes; the strong silhouettes, for example, and rope detailing at the shoulders of certain blazers. It sits on perhaps the most iconic spot on Savile Row – number 1 – and this store (whilst not the only one in London) offers everything from bespoke tailoring to father and son afternoons.