The Best Board Games From Around the World 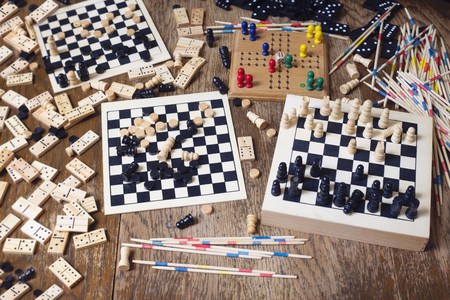 Lose yourself in a board game | © veronka and cia / Getty Images

Indoor activities have become hugely popular in recent weeks. With most of us still facing an extended period of lockdown, Culture Trip takes a look at how different countries are staving off boredom by playing board games. And there’s no need to ditch the pyjamas.

Netflix, PlayStation and other forms of electronic entertainment are everywhere, but board games remain a popular pastime. We all know universal favourites such as Monopoly, Scrabble and Guess Who?, but there are other popular games from around the world. Culture Trip takes a look at how different cultures have been keeping themselves busy for centuries.

The oldest board game in the world

You might be familiar with the mummies and jewels that were discovered in the tombs of Egypt in the early 20th century, but a lesser-known treasure was also unearthed. One of the main attractions in Cairo’s Egypt Museum is the wooden game known as senet (the passing game). Ancient Egyptians were apparently partial to playing games whenever they could, but sadly the exact rules of this pastime have been lost to time. There are modern interpretations on how to play based on partial manuscripts dating as far back as 3500 BCE. 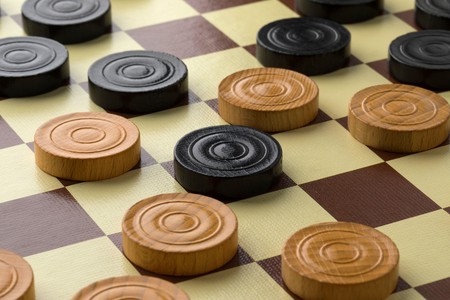 Draughts, also known internationally as chequers, is almost as old as senet. A board dating back to 3000 BCE has been traced back to Ancient Mesopotamia. Chequers is still hugely popular today, with slight variations being adopted in different regions. Backgammon and chess are other popular games from around this early period, with modern incarnations of both of these remaining largely unchanged from the original versions.

Five board game classics from the past

In Asia and Africa there are some card games that involve elements of a board. For the purposes of this list, card titles such as Uno and tile-based games such as dominoes and mahjong will be ignored; the focus is on games where the board itself is part of the game.

Bizarrely, this marble ball game is better known as Chinese chequers, even though it is neither based on chequers, nor does is it originate from China. Sternhalma (sometimes written as stern-halma) is played on a star-shaped board with six points, allowing up to six players to take part at the same time. You will have seen the boards in various parts of the world; they have become popular souvenirs often brought back home by holidaymakers, although the game itself is still massively popular in Asia. Just to cloud matters further, the game was invented in 1892 in Germany, and is a twist on an earlier American strategy board game called halma.

One game that does come from China, and remains hugely popular in the country, is go. The abstract strategy board game (a term that refers to the experience of taking part being more significant than the theme) sees two players battling it out to capture the opposing side’s pieces. There are different rules and scoring systems between the Korean, Japanese and Chinese versions of the game, although they all share the same board and sets of black-and-white totems.

Popular across South Asia, carom is combination of board game and action/strategy sport. The basic premise is to shoot pieces into the pockets of a board by flicking objects around a confined playing area. It’s hard to describe if you haven’t seen it in action, but imagine a tabletop version of pool, but with your fingers used instead of cues.

The square boards are often made out of polished plywood, with the flat pieces that are attributed to each player being made out of any material that can easily slide across the surface area. Carom has a different cultural significance to other games on this list in countries such as India, Pakistan and Sri Lanka, where it is common for boards to be brought along to social gatherings. Rounds are traditionally played between highly competitive adults, giving carom another link to classic strike-and-pocket sports such as snooker and billiards.

Ludo was patented in England in 1896, but has its origins further to the east. The game is derived from the Medieval Indian game of pachisi and is one of the most recognisable pastimes in the world today. Many countries have renamed the game based on the overriding emotions most players have to endure when playing a round. Germans have labelled ludo as mensch ärgere dich nicht (man, don’t get upset) and in Greece they call it γκρινιάρης (grumbler). Why does anyone even play this infuriating game? 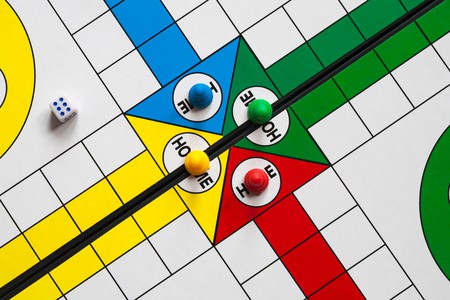 Mancala is a term used to group a family of games popular in India, Africa and the Arab world. In its original form mancala is essentially a count-and-capture game, where two players compete to sow seeds and reap the rewards. Given its simple components, it’s a game that has been exported to various parts of the world, including America.

It’s probably worth explaining some of the different types of newer games that are popular today, before we look at specific examples. There is a notable difference between the abstract strategy games such as chess and go, and more chance-based games. In particular, there is currently a distinct split between the preference of Americans and Europeans, where two competing branches have evolved, each having its own set of fans and detractors. 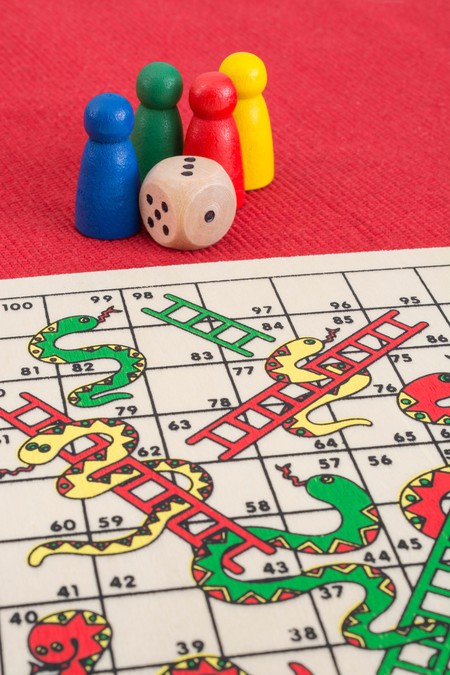 Eliminating the element of luck from some games makes them more strategic and methodical, although to some that also makes them more boring. Snakes and ladders, still widely popular with children everywhere, is one of the ultimate games based on pure chance as it is entirely centred on the outcome of the roll of a dice. Americans might know this as chutes and ladders, as an early edition of the game was renamed to give it greater appeal to youngsters.

The most popular board games in the world

Eurogames were popularised in Germany in the 1960s, when the term began to be used, although many examples of the type of games in this category can be dated much further back. This genre has more solid examples of themes than some of the ancient games that have already been looked at, but tend to be less action-orientated than games from America.

As you can see from some of the best-selling games of today, there are many ideas from around the world that come together to great effect.

Pictionary just about classifies as a board game, although in reality it is a party game in the vein of more traditional parlour games such as charades. There is a board, but it is merely a functional apparatus to the real game taking place elsewhere. The objective is simple as two teams of players compete to guess a word drawn at random from a pack of cards. The person who pulls a card from the deck then has to sketch the word within a time limit.

Risk is the best-known example of war-gaming, a subgenre of strategy gameplay that has become increasingly popular since WWII. The gameplay is very similar to fantasy games such as Dungeons and Dragons, but purists insist on some element of realistic military battle being part of the set-up. In the case of Risk, the board is actually a map of the world, with the territories divided into 42 political factions. Players have to control their armies, plan attacks and forge alliances with rivals to control the play area. Games can last for days and can be ponderous if you’re after a more lively experience.

This murder mystery game capitalised on the popularity of the whodunnit genre in the 1950s and has gone on to become an ubiquitous presence in homes around the world. Six suspects are moved around a board, which is designed like an old English country manor. Your job is to find out who committed a murder, what weapon they used and in which room the grisly event took place. Cluedo (Clue in North America) is a fiendish game of deduction and memory, and again has links to the parlour game concept of murder mystery weekends. The modern fascination with online sleuthing and true crime have seen Cluedo sales increase, with a new film version said to be on the way. 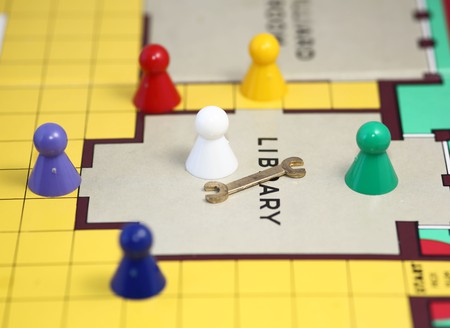 The first game most people think of when talking about board games is Monopoly. The first incarnation of the game was created by anti-monopolist Lizzie Magie in 1903, as an entertaining way to highlight single-tax theories. The street-based version of the game that is known today was developed by the Parker Brothers, who picked Atlantic City, New Jersey, as the home city for what turned out to be a hugely successful commercial venture. The format has been licensed to over 100 countries and there are countless commercial spin-offs and media tie-in editions. The tokens that players choose at the start of the game have gained iconic status themselves and have changed over the years, with only the race car, battleship and top hat surviving from the first game sold in 1937.

Originally called The Settlers of Catan, this German strategy game was only invented in 1995 but is now one of the best-selling games in America. There are some random elements to it, but on the whole the strategy gameplay has been lauded for its simple but effective presentation. The objective is to establish a settlement by building holdings and trading resources. Catan is the first Eurogame to achieve mass popularity outside of Europe, and has precipitated a shift in game tastes in America. 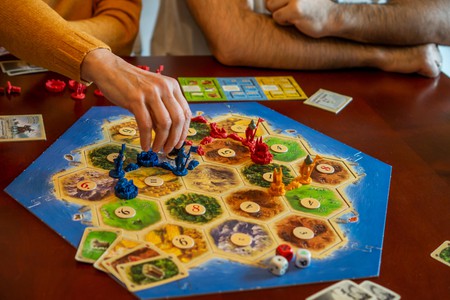 The best-selling game of all time is also one of the most popular today. Chess is as ancient as some of the earliest games that have been previously mentioned on this list, and has historically been seen as a pastime for the well educated. The game involves no hidden information, so set-up time is rarely a factor as two players can simply sit down and start playing right away. The pieces and their movements have been established since the seventh century and have remained unchanged since.

Knowing how to play the game, and even owning a board, have become status symbols and as such, chess is also the most valuable game in the world. Collectors have driven prices up at auctions for some of the oldest examples, where a single piece can fetch upwards of £1m.