The Best Lunch Spots In The West End, London

The West End is loaded with lunch chains to say the least, all overflowing with queues and pre-wrapped sandwiches come 1pm. Make more of your lunch break with one of the many independent lunch spots popping up around Soho and Covent Garden. From freshly made salads to plates of steaming chef-made dim sum, these lunch-time havens will make sure you never eat soggy tuna and mayo again. Here is our guide to the best. 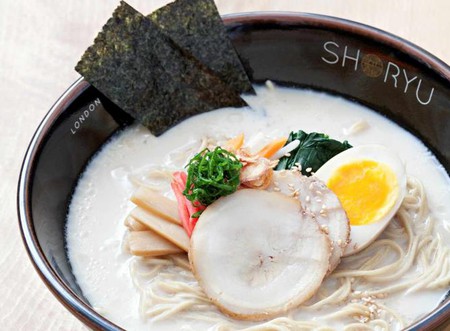 Taste the real deal at Shoryu Go. Hakata-style tonkotsu ramen, noodles in a rich, pork-bone broth, is what they do here, and they do it spectacularly well. Arguably the best in London, this authentic Japanese dish will set the bar for all ramen to follow. The broth is flavoursome, the noodles silky with just the right amount of bite, and toppings range from traditional, comforting pork belly to fiery jalapeños and caramelised black garlic (don’t order the latter if you have an afternoon business meeting). Eat in at Carnaby Street or Soho for the full experience, or grab a takeaway from Shoryu Go on Air Street, they do an amazing lunch deal of ramen, bun or dessert, and soft drink. 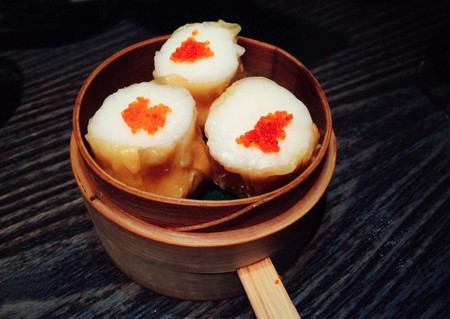 Dim sum fans, you haven’t lived until you’ve eaten at Michelin-starred Yauatcha. This isn’t like any dim sum restaurant you’ve experienced. A self-styled teahouse, interiors are sleek and contemporary, done out in wood and vibrant cobalt blue, and the all-day dim sum is, to put it simply, mind-blowing. Dumplings range from plump scallop siu mai to crisp duck pumpkin puffs, but the cheung fun is the star of the show, creatively using a layer of fried pastry to add a satisfying crunch to this usually all-gelatinous dish. Whatever you go for though, make sure to pick up a macaron or three from the patisserie counter on your way out.

Indian and Mexican food may seem an unlikely combination, but one bite of WrapChic’s indian street food-filled burritos will be enough to convert any non-believer. Starting in Birmingham in 2012, this Indian burrito company is now on a mission to take over London, and it’s succeeding, with three locations already open for business in the city. Filled with everything from juicy chunks of spicy Chettinad chicken (a South Indian recipe) to deliciously salty paneer Masala and flaky fish Malabari, these burritos will have you questioning your regular pulled pork and rice combo. Make sure you add a paneer ‘Wraposa’ to your lunchtime order too, it’s both the healthiest and most delicious samosa you’ll find in London. 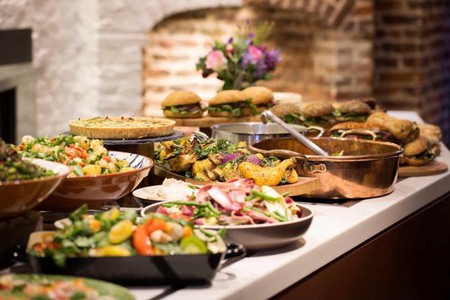 The Black Penny, is a coffee shop that does so much more than just coffee. Created by George Notley, formerly of Tom’s Deli, the mouthwatering dishes include confit duck hash, pineapple and chilli frittata and unbelievably succulent chicken. It’s the salads that are the headline act however, piled high on dishes and available to eat in or carry off in takeaway boxes. Filled with the likes of seared tuna, tender slices of duck breast and perfectly cooked couscous, they’re a step ahead of your standard chicken caesar. Finish things off with a coffee, tea or juice, we reckon the ginger, orange and carrot blend is well worth skipping a caffeine fix for. 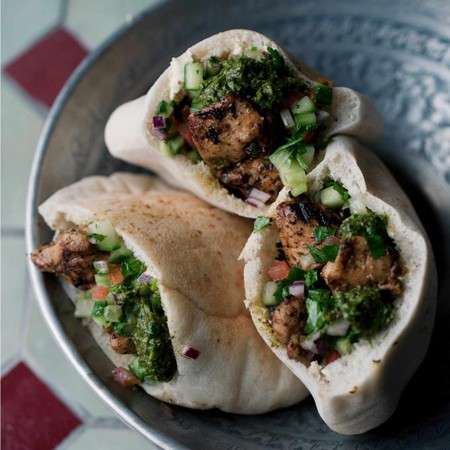 London’s poshest kebab shop, Sesame comes from the genius Ottolenghi group of deli’s and restaurants dotted around the city. Showing just how good Mediterranean street food can be, there’s no fatty meat rotating on spits here, just gorgeous chunks of spiced lamb and paprika and cardamon chicken, stuffed into fresh, fluffy pittas with hummus and zhoug – a Yemenite green chilli sauce. If kebabs aren’t your thing, the salads give as good as they get too, with swirls of courgette mixed with bulgar wheat, lemon peel and feta, and beetroot decorated with honey, orange and labneh (a strained yogurt). 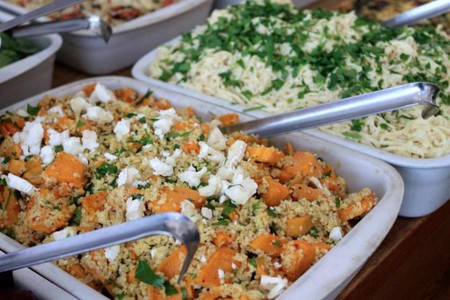 Tucked away on Floral Street from the hustle and bustle of Covent Garden’s street performer-lined main street, Kastner & Ovens is a local favourite, as demonstrated by the queues out the door come 1pm. A tiny space, here you’ll find two rows of buffet-style homemade salads, hot food and soup, with a tempting row of cakes and puddings lined up by the till (a crafty trick if ever we saw one, no one can stand beside that banoffee pie without ordering a slice). Incredibly tasty, staff will fill a box with everything from succulent fish pie to pea and chorizo salad, for a mere £5. Make sure you get there early, once the dishes are gone, they’re gone.

London’s Balthazar Boulangerie is a replica of the original New York institution that is a take on the traditional French brasserie. A London restaurant masquerading as a New York restaurant, masquerading as a French restaurant, that somehow manages to pull it off with aplomb. It’s the boulangerie next to the restaurant that’s a lunch-time must though. Crammed with patisserie (the macarons are to die for), artisanal focaccia and brioche, sandwiches loaded with rosettes de lyon and cornichons, savoury sausage rolls and tarts, this New York-turned-London restaurant gives a surprisingly charming bite of France. 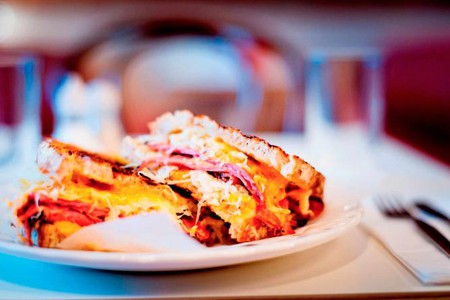 A self-named ‘kind of Jewish-deli with cocktails’, Mishkins is part of the group behind the celebrated Polpo and Spuntino’s. A New York interpretation of Jewish food, rather than full Kosher (as you should have guessed by the cocktails on the menu), you’ll find all the classics, from chopped liver to salt beef here, plus Big Apple-style hotdogs and plates of onion rings. It’s hearty, and warm, and does a mean pastrami sandwich, ‘The Reuben’ of pastrami, swiss cheese and sauerkraut on rye bread. Basically, it’s proof that enthusiasm and love of the food, rather than pure authenticity, is enough to make a really cracking Jewish-style lunch spot. Oh, and be sure to grab a bowl of the chicken matzah ball soup early, it has a tendency to run out.