Forget your high street brand cafes with their fancy (expensive) lattes and mochas. In Soho, Algerian Coffee Stores has been supplying Londoners their caffeine fix at super low prices for nearly 130 years.

When Algerian Coffee Stores opened in 1887, London’s coffee society was in full swing. Victorian London was the capital of the British empire and businesses and the city itself were booming. Since then it’s survived the Blitz, the ration years, the swinging 60s, several recessions and Soho’s ongoing journey away from its seedy past to the thriving foodie centre it is today. Shops, bars and clubs have come and gone, but the red awning of Algerian Coffee Stores remains.

Stepping into Algerian Coffee Stores is like stepping back in time – the wooden display case and counter haven’t changed in 128 years and neither has its reputation for friendly and knowledgable service. The big plus is that prices haven’t risen that much since it opened – you can still pick up a coffee here for a £1. 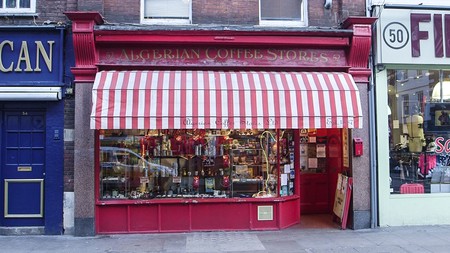 Shop for all things coffee

The unassuming Soho shop is like a temple to all things coffee – from hi-tech grinders that would satisfy discerning east London hipsters to traditional Turkish coffee pots, the store celebrates our favourite caffeine drink in all its forms. (It’s also started stocking everything you might need to make matcha, 2017’s drink trend du jour).

What’s made Algerian Coffee Stores so special is its variety. You can choose from 80 different types, both single original and plenty of blends to find your perfect pick me up. And while coffee is the name of the game here, the store also has a pretty strong commitment to tea, stocking 120 different types. 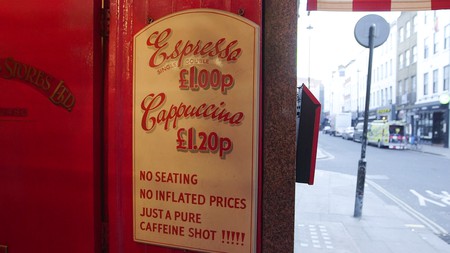 While you can purchase Arabicas, organic Bolivian or Fairtrade Mexican beans or grinds, the store wouldn’t have survived without a selection of some more unusual coffees. Some of the rarer types include Jamaica Blue Mountain Coffee, reputed to be one of the most expensive coffees in the world and predominantly exported to Japan.

The store also sells coffee flour, made from the fruit that surrounds the bean, which surprisingly does not taste of coffee. So next time you are on Old Compton Street, pop in for a cheap latte and discover this historic treasure trove.