A History of St. Paul's Cathedral in 60 Seconds

With it’s world famous dome, St. Paul’s Cathedral is an iconic part of London’s skyline. After being destroyed four times throughout history, the current cathedral – designed by Christopher Wren – has lived through three centuries, and its dome is the second largest in the world at 366 feet high.

The first church located on Ludgate Hill was built in 604 AD, dedicated to the apostle Paul. The wooden building was established by King Ethelbert of Kent, as home to the bishop of East Saxon, although it was short-lived, repeatedly damaged and destructed. After destroyed by a fire and rebuilt from 675 AD to 685 AD, the second cathedral fell victim to the Vikings during a periodic invasions in 962. Being rebuilt in the same year and burnt down once again, the fourth St Paul was built in 1087 (often referred to as the old St Paul). During this time, the style of architecture changed from Romanesque to Gothic. The cathedral quire was the first to be completed, in 1148, enabling the cathedral to return to function as a place of worship. Taking over 150 years to be completed, the final touches were applied in 1240. A new gothic quire was added in 1313, making the church the third longest in Europe, at 596 feet. When the spire was completed the following year, St Paul also became the tallest church in Europe at that time, with a height of 489 feet. 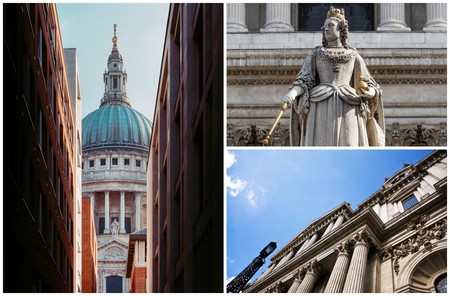 By the 16th century St Paul’s was starting to decay. The spire was destroyed by lightning in 1561, and during the Civil War the church fell into a serious state of disrepair. The Great Fire of London, in 1666, destroyed the cathedral and led to the decision to build an entirely new church. After nine years of planning by Sir Christopher Wren – scientist, mathematician and Britain’s most famous architect – St Paul’s rebuilding commenced, and was declared officially complete by Parliament on 25 December 1711. To make the building more inviting, the Cathedral Chapter ran the so called ‘completion of decoration’ in the 19th century, by using vivid mosaic and stained glass.

At the end of the 20th century a 15 year restoration project started, with extensive copper, lead and slate renovation work, and was completed on 15 June 2011.

Today, St Paul’s Cathedral invites people from across the world to discover the impressive interior, the crypt with nation’s heroes buried in, and a dome, that can be climbed – all 528 steps up.