What You Need To Know About London’s Richmond Park

It’s impossible to describe Richmond Park as a ‘hidden gem’ due to its sheer size, but many visiting London tend to overlook this park in favour of the hustle and bustle of the city centre.

Comparable to some of the UK’s most treasured open spaces, Richmond Park is a site of great national – and international – importance. 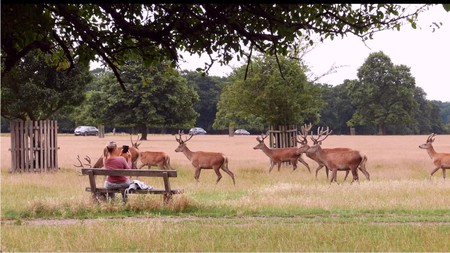 Get up close to the deer. Just don’t let your dog loose! | © Culture Trip

For those who are yet to visit, here’s a rundown of what you can expect.

The notion of vast open grasslands and herds of wild deer, in a park near Central London, is a concept many might struggle to believe. Yet the park, and its famous residents, have been part of London’s history since the 1600s.

In 1625 Charles I moved his court to Richmond Palace to escape the plague. He requisitioned the surrounding land to create a hunting park, thus preserving 2,500 acres of wild land, which we now know as Richmond Park – the largest of London’s Royal Parks.

Red and fallow deer have been roaming freely here since they were introduced to the land in the 17th century.

When it comes to biodiversity, Richmond is at the forefront of conservation. Home to a variety of ancient trees and rare species of birds, beetles, bats and flora (among countless others), the park’s protected status make it a natural refuge for wildlife.

The focus of the park, however, are the grazing deer, and even they have a huge part to play in maintaining the ecosystem on which the park thrives.

Autumn is an important time of year for the deer of Richmond Park. If out for a stroll, your serene morning may well be interrupted by the sounds of rutting bucks and stags.

During rutting season, the males put on their best display of roaring, barking and clashing antlers, in order to attract potential mates. Quite a spectacle! Beware curious onlookers, there’s a lot of testosterone flying around, and it’s best to keep well back.

The winter months bring much festivity around the park. Horse-drawn carriage rides complete with sloe gin and mince pies are on offer, along with a dazzling frost-covered landscape. A brisk walk through the park on a sunny December day, followed by a trip to a neighbouring pub, has to be one of the best Sunday activities in London.

Come March, the park slowly begins waking up from its winter slumber. Springtime is on the horizon and with it comes deer birthing season. Between May and July you can watch baby deer bounding around and being generally cute. Bambi eat your heart out.

When you encounter the deer, remember they are wild animals and although used to humans, they should not be approached or fed. Dogs are fine to run around off-lead, but it is at your own risk, and it’s recommended you stick close to the paths. One word – Fenton! If you know, you know.

Despite being a place of immense peace and quiet, there’s no shortage of activities on offer. You can easily spend all day here, getting lost on wild rambles and cycling to the remotest corners.

Getting around by bicycle is easy and fun. The Parkcycle centre rents bikes, and supplies all the accoutrement a family might need for a day out on the park’s trails.

Take a picnic and dine al fresco in the long grass. In summer, Londoners arrive in droves to make the most of those (rare) balmy summer days. Don’t be put off by the prospect of crowds, however, as unlike other London parks such as Greenwich and Regent’s, you can be off the beaten track within moments. Finding a more secluded spot is not hard.

Once you’ve had your fill of rolling meadows and deer stalking, take a stroll along Richmond Riverside – or even hire a boat and row to a riverside pub.

Looking for somewhere to stay near Richmond Park? Book one of the best hotels in the area – including hotels close to the legendary Wimbledon Tennis Club – now through Culture Trip.